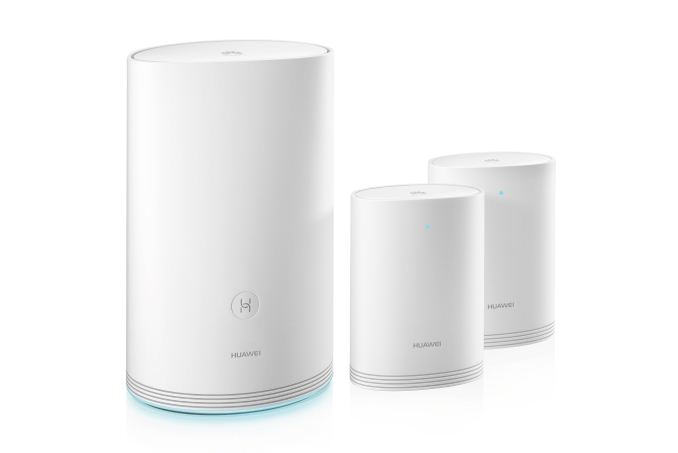 Mesh networking / whole-home Wi-Fi systems have seen rapid growth over the last couple of years. Almost all vendors in the consumer networking space have one or more offerings in that hot segment. At CES 2018, Huawei threw its hat into the ring with the WiFi Q2 Whole-Home Wi-Fi Solution. Huawei is no stranger to consumer networking equipment, but, their presence in the North American market is minimal.

In 2016, Huawei had introduced the Q1 single-band router with a bundled powerline-based Wi-Fi extender. It utilized HomePlug AV (200 Mbps) as the backhaul. With the WiFi Q2, Huawei is going in for a major overhaul in both the internals as well as the industrial design. The new device looks more like the Netgear Orbi kits, but, the similarities end there. Unlike other vendors who use very similar hardware for both the base / main router and the satellites, Huawei uses completely different platforms for the two. Like most of the mesh kits targeting the low-end and mid-range market, there is no dedicated wireless backhaul channel. Instead, the kit uses powerline and Wi-Fi for the base-satellite communication.

The satellite, on the other hand, is a pure HiSilicon solution, with a HiSilicon Hi1151 to handle both 2x2 2.4 GHz and 5 GHz radio duties. The G.hn chipset from the main router is retained.

The WiFi Q2 comes in two flavors - a base and a number of satellites, or, multiple base stations (main routers). In a configuration with a base and a satellite, the backhaul is a dedicated PLC, but, a configuration with two main routers could use both PLC and the 5 GHz (867 Mbps) channel. The 5 GHz channel could be shared with clients. The system does support load balancing and can change automatically according to the connection quality of the PLC and mesh Wi-Fi. The 3-base package supports Ethernet backhaul. 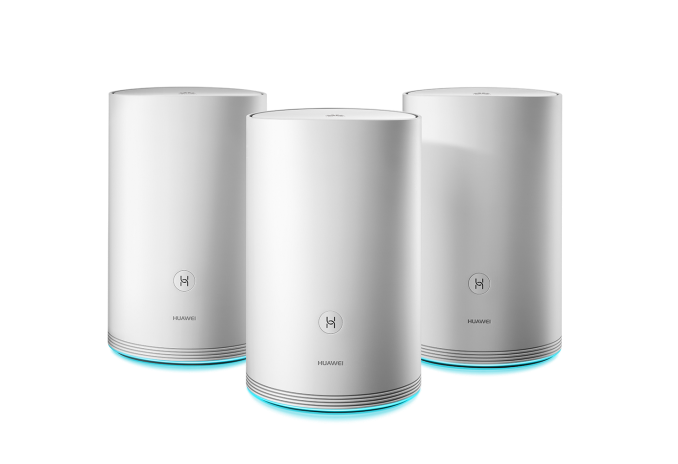 From the perspective of networking industry observers, the key update here is the shift from HomePlug to G.hn for the PLC segment. The HomePlug Powerline Alliance has stopped working on updates to the standard - there are going to be no new chipsets to improve performance and cater to the upcoming consumer / service provider requirements. On the other hand, G.hn, still has legs to go (theoretically) beyond what the best HomePlug chipsets can offer. Even though we didn't hear of any new G.hn silicon at CES 2018, there has been talk of chipsets with 2 Gbps theoretical throughputs being trialed by service providers. HiSilicon's Hi5630 is still a 1 Gbps G.hn chipset similar to the Marvell 88LX3142 / 88LX2718 used in the Arris RipCurrent products. The status of various suppliers in the G.hn market is pretty interesting - DS2 was purchased by Marvell, which has now sold the division off to MaxLinear. Copper-Gate's fate is unknown, after having been purchased by Sigma Designs, which is currently in the middle of divesting its non-Z-Wave assets after being purchased by Silicon Labs. In this context, Huawei's decision to source the PLC chipset from its subsidiary, HiSilicon, is a strategic one.

Huawei compared the performance of HiSilicon's Hi5630 with the HomePlug AV products that they were shipping. They saw some obvious advantages (similar to what we saw in our coverage of HomePlug AV vs. G.hn). Given that HomePlug AV2 is essentially a dead-end because of the absence of any roadmap from HomePlug silicon vendors, it was a no-brainer for Huawei to go with G.hn. Huawei's tests showed that G.hn's wider frequency brand, higher speed, stronger anti-interference, and lower delay made the decision much easier.

At this juncture, it is clear that G.hn will be the technology of choice for PLC backhaul purposes in whole-home networking systems. However, the absence of support from high-profile vendors such as Qualcomm and Broadcom is an issue that might make other consumer networking equipment vendors avoid PLC backhaul altogether.

Coming back to the WiFi Q2, it is clear that the system is targeting the low-end to mid-range market segment, currently served by the likes of Google WiFi. That said, the product stands out from the crowd, thanks to its PLC backhaul. Pricing and other launch information for the Huawei WiFi Q2 is not available yet.