An inescapable part of the world of self-building a personal computer is customization and aesthetics. For most users, and even some gamers, the box under the desk is built for function. But there’s a sizeable crowd of chassis/system modders, LAN gamers and forum users that like to show off what they have. For these users, we have styled motherboards, graphics cards, coolers and even power supplies in order to build the design. Chassis can come with side windows, be fully open or custom built to how the user wants. One area in the customization route that has been a hard one to innovate has been what to do with DRAM.

Corsair and ADATA provides colored tops for some of their ranges, G.Skill has themed heatsinks but also bundle the high end kits with additional fans with LEDs, but currently Avexir have stood out with different colored modules with LEDs along the top. Now GeIL is joining the crowd with the Super Luce line. 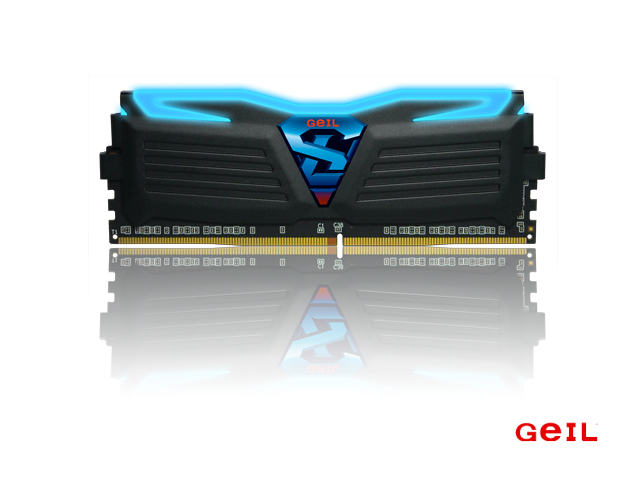 The principle behind these kits is that the top of the module can beat at five different rates, based on the temperature of a thermal sensor on the module. Under 40ºC, the LED will pulse at 13 beats per minute, or one per 4.6 seconds. Then as the temperature rises in sets of 5ºC, it will move up to 60, 80, 120 and 200 beats per minute, reaching the peak frequency over 55ºC. 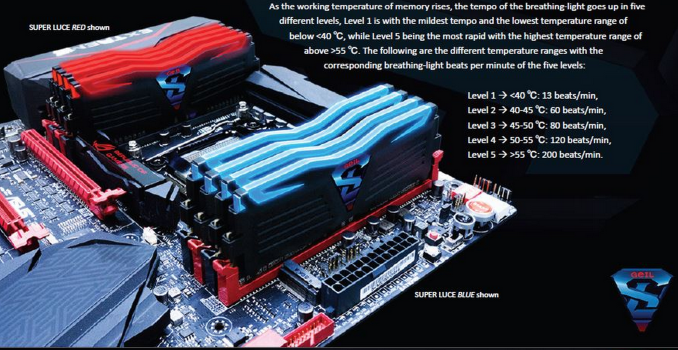 Judging by the way that GeIL is describing their implementation, each module is independent of the others. This might indicate that depending on the heat movement around the socket, one side of the modules might be at a different heartbeat frequency than the others.

The Super Luce family of products will be available in white, red or blue, from DDR4-2666 MHz to DDR4-3400 MHz and up to 64GB capacity. Currently on the website we are seeing each of the colors at DDR4-3000 and DDR4-3400, but exact combinations of colors, frequencies and capacities have not been announced yet. GeIL is indicating availability by the end of April.