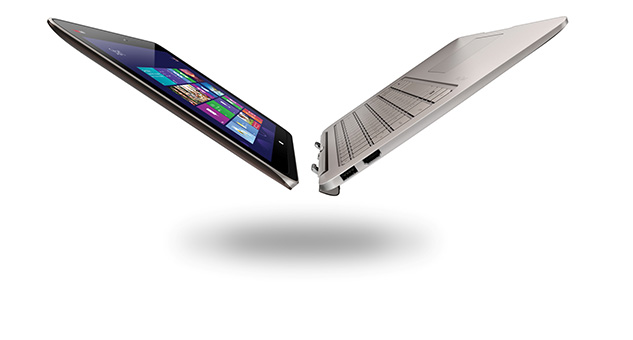 Since the launch of Windows 8, many users have been waiting for something that does a better job of spanning the gap between laptops/Ultrabooks and tablets. We’ve seen sliders, twist screens, laptops with touchscreens, foldable laptops like the Yoga, and even a few with detachable screens. HP now enters the market with one of the latter, as the Spectre 13 x2 that has a detachable screen.

Given that we’re talking about Ultrabook internals – and a 13” display – pricing is going to be substantially higher than what you’ll pay for a traditional tablet. HP also goes full Windows 8 here, so there’s no secondary SoC running Android like in the ASUS Transformer Book Trio. HP hasn’t yet provided us with a full rundown of the specifications, but it appears the Spectre 13 x2 will sport a 1080p display and the tablet portion pretty much only includes a microSD slot. The dockable keyboard meanwhile adds a couple USB 3.0 ports, HDMI port, and a full size SD card slot; it also includes additional battery capacity and has a backlit keyboard.

While the idea of a 13.3” laptop/hybrid is good, I do have to question the utility of a 13.3” tablet. I’ve used Dell’s XPS 12, and frankly it just feels massive when in tablet mode, and that’s a slightly smaller display size. On the other hand, typing on a 13.3” sized chassis and keyboard definitely sounds more welcoming than a 10” or 11.6” keyboard, so the detachable tablet aspect is basically a nice extra for those times when you want to leave the keyboard behind.