New in Maps is the 3D flyover feature which is limited in iOS 6 to devices with an A5 SoC or better. This means the iPhone 4 (GSM and CDMA), iPhone 3GS, and iPod Touch 4th Generation get excluded from the 3D buildings experience. 3D buildings already taxes the 4S considerably and drops frames from time to time, so I can see why the 4 and 3GS didn’t make the cut. 3D buildings on the iPhone 5 is completely fluid 60 fps, it seems.

On applicable devices, there’s a 3D button alongside the location indicator (which snaps to your present location or toggles compass mode) which toggles a perspective tilt. If theres a region in the current view with 3D building data and you’re at a sufficient zoom level, this changes to an icon with buildings, and tapping enables 3D building rendering. On excluded devices without the right SoC you simply don’t see this toggle at all and can’t two-finger tilt. 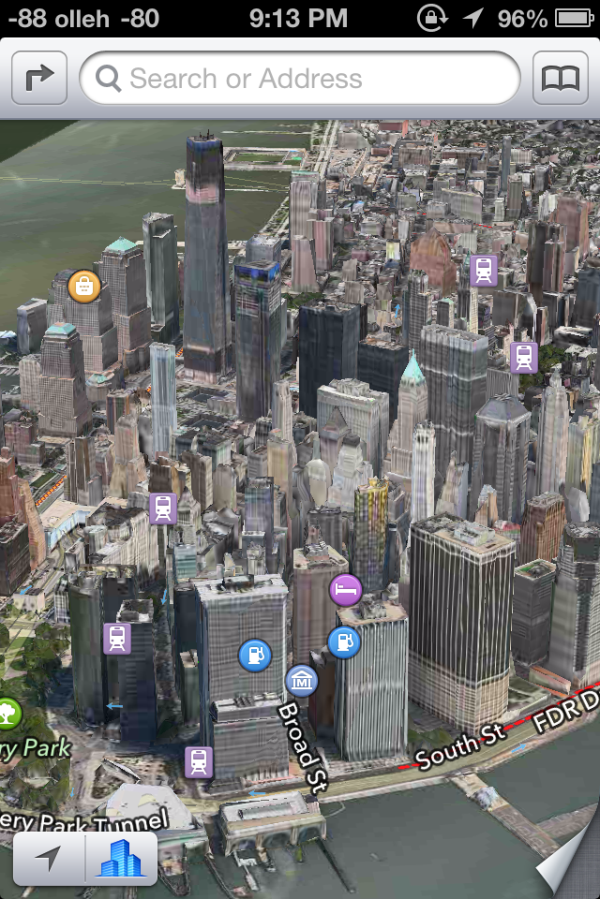 NYC was recently added to the iOS 6 3D Maps dataset

These buildings generated using aerial captures as I touched on earlier, and pop in with dynamic Level of Detail (LoD) both for geometry and textures. If you’ve used Google Earth on a mobile device and seen the 3D buildings Google has and the way they pop in, you’ll instantly know what I’m talking about. Generally the geometry starts very smoothed, and Apple has done a good job in iOS 6 of keeping visible switching around between levels hard to notice.

When it comes to evaluating the detail and quality of 3D buildings, the difficulty ultimately lies in selecting the right features to compare. I suspect Apple is also doing some hand massaging of building geometry in some of the more notable urban centers, something Google has told me they do as well, in addition to the user-contributed sketchup buildings. Thus, comparing notable landmarks gives an idea for the best case but not the empirically derived geometry that makes up most of the dataset. Of course in the dense urban environment reconstructing geometry and imagery requires a lot more hand massaging because of occlusions and other considerations. 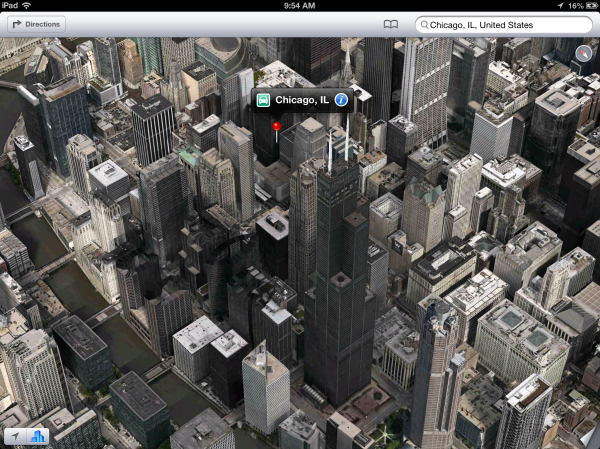 The level of geometry detail is mostly great in the markets that I checked out. Trees and other geometry which isn’t like a building also gets represented, though some palm trees end up looking like elongated lightbulbs at times. It isn’t always perfect though. 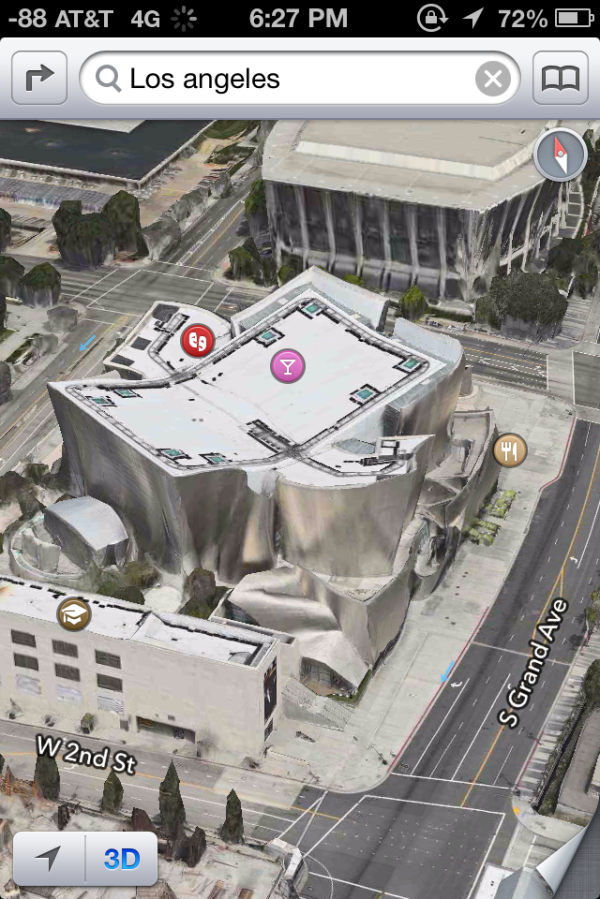 A trouble building I found while making a cursory inspection of Los Angeles. Update: The building actually looks like this (Google Maps) as pointed out by a commenter. Still, it's possible to find buildings with strange geometry and textures applied in iOS 6.

I’ve browsed a lot of buildings which aren’t noteworthy landmarks or part of a city skyline and seen some interesting geometry and texture interpolation errors. Thankfully they’re not super common, and not even Google’s 3D database is free of them, so it’s nothing I hold against Apple’s crew.

The other question then becomes how many cities actually have 3D buildings available from Apple. To find out I manually checked the top 100 most populated cities in the USA and top 30 globally, and made a huge spreadsheet. Unfortunately as of my checking there really aren’t that many markets at all. In fact, it isn't much of a stretch to say that Apple's 3D buildings database is actually very limited at the moment, and basically only includes the USA.

Internationally, none of the top 30 cities have any 3D buildings. In fact, the only international 3D support that I’m aware of is a small region around the Sydney opera house, the Colosseum in Rome, and parts of London in the UK. I was actually surprised to see London get added into the dataset right for the iPhone 5 keynote, as I had checked and seen it was absent just a day before.

In the US, 26 or so cities have 3D building data as of this writing. For the number of the cities which do have it, it tends to be a small grid localized around the densest urban area, which isn’t surprising. Apple doesn’t seem to have prioritized its launch markets by population either, and there are some fairly notable exclusions as well.

Hopefully Apple continues building this dataset out at a good pace, because at present the dataset for 3D buildings and acceptable aerial photography is honestly disappointing compared to Google Earth's impressive dataset. That said, we've already seen Apple deploy more 3D markets between iOS 6 beta 4 and the GM. The question for the future is not only how long it will take to get adequate coverage of the top 100 markets in the USA and abroad, but beyond that point what the re-visit schedule for this dataset will be.