Analysis of the new Apple iPad

Yesterday Apple unveiled its third generation iPad, simply called the new iPad, at an event in San Francisco. The form factor remains mostly unchanged with a 9.7-inch display, however the new device is thicker at 9.4mm vs. 8.8mm for its predecessor. The added thickness was necessary to support the iPad's new 2048 x 1536 Retina Display.

Driving the new display is Apple's A5X SoC. Apple hasn't been too specific about what's inside the A5X other than to say it features "quad-core graphics". Upon further prodding Apple did confirm that there are two CPU cores inside the SoC. It's safe to assume that there are still a pair of Cortex A9s in the A5X but now paired with a PowerVR SGX543MP4 instead of the 543MP2 used in the iPad 2. The chart below gives us an indication of the performance Apple expects to see from the A5X's GPU vs what's in the A5: 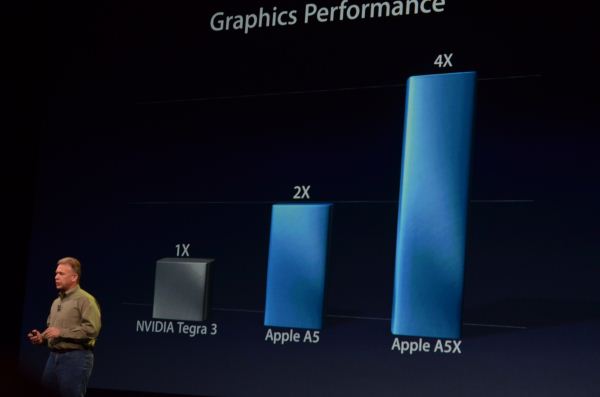 Apple ran the PowerVR SGX 543MP2 in its A5 SoC at around 250MHz, which puts it at 16 GFLOPS of peak theoretical compute horsepower. NVIDIA claims the GPU in Tegra 3 is clocked higher than Tegra 2, which was around 300MHz. In practice, Tegra 3 GPU clocks range from 333MHz on the low end for smartphones and reach as high as 500MHz on the high end for tablets. If we assume a 333MHz GPU clock in Tegra 3, that puts NVIDIA at roughly 8 GFLOPS, which rationalizes the 2x advantage Apple claims in the chart above. The real world performance gap isn't anywhere near that large of course - particularly if you run on a device with a ~500MHz GPU clock (12 GFLOPS): 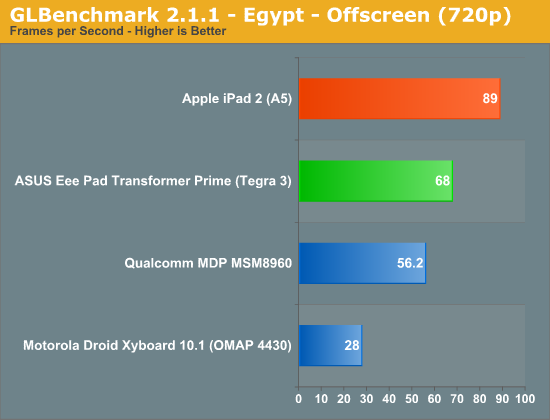 GLBenchmark 2.1.1's Egypt offscreen test pegs the PowerVR SGX 543MP2 advantage at just over 30%, at least at 1280 x 720. Based on the raw FP numbers for a 500MHz Tegra 3 GPU vs. a 250MHz PowerVR SGX 543MP2, around a 30% performance advantage is what you'd expect from a mostly compute limited workload. It's possible that the gap could grow at higher resolutions or with a different workload. For example, look at the older GLBenchmark PRO results and you will see a 2x gap in graphics performance: 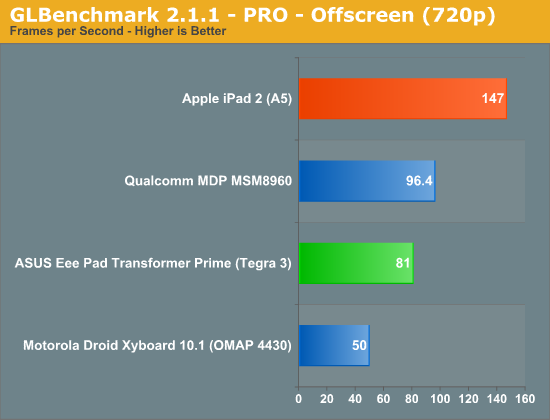 For most real world gaming workloads I do believe that the A5 is faster than Tegra 3, but the advantage is unlikely to be 2x at non-retinadisplay resolutions. The same applies to the A5X vs. Tegra 3 comparison. I fully expect there to be a significant performance gap at the same resolution, but I doubt it is 4x in a game.

The A5X doubles GPU execution resources compared to the A5. Imagination Technologies' PowerVR SGX 543 is modular - you can expand by simply increasing "core" count. Apple tells us all we need to know about clock speed in the chart above: with 2x the execution resources and 2x the performance of the A5, Apple hasn't changed the GPU clock of the A5X.

Assuming perfect scaling, I'd expect around a 2x performance gain over Tegra 3 in GLBenchmark (Egypt) at 720p. Again, not 4x but at the same time, hardly insignificant. It can take multiple generations of GPUs to deliver that sort of a performance advantage at a similar price point. Granted Apple has no problems eating the cost of a larger, more expensive die, but that doesn't change the fact that the GPU advantage Apple will hold thanks to the A5X is generational.

I'd also point out that the theoretical GPU performance of the A5X is identical to what Intel is promising with its Atom Z2580 SoC. Apple arrives there with four SGX 543 cores, while Intel gets there with two SGX 544 cores running at ~2x the frequency (533MHz vs. 250MHz).

With the new iPad's Retina Display delivering 4x the pixels of the iPad 2, a 2x increase in GPU horsepower isn't enough to maintain performance. If you remember back to our iPad 2 review however, the PowerVR SGX 543MP2 used in it was largely overkill for the 1024 x 768 display. It's likely that a 4x increase in GPU horsepower wasn't necessary to deliver a similar experience on games. Also keep in mind that memory bandwidth limitations will keep many titles from running at the new iPad's native resolution. Remember that we need huge GPUs with 100s of GB/s of memory bandwidth to deliver a high frame rate on 3 - 4MP PC displays. I'd expect many games to render at lower resolutions and possibly scale up to fit the panel.

What About the Display?

Performance specs aside, the iPad's Retina Display does look amazing. The 1024 x 768 panel in the older models was simply getting long in the tooth and the Retina Display ensures Apple won't need to increase screen resolution for a very long time. Apple also increased color gamut by 44% with the panel, but the increase in resolution alone is worth the upgrade for anyone who spends a lot of time reading on their iPad. The photos below give you an idea of just how sharp text and graphics are on the new display compared to its predecessor (iPad 2, left vs. new iPad, right): 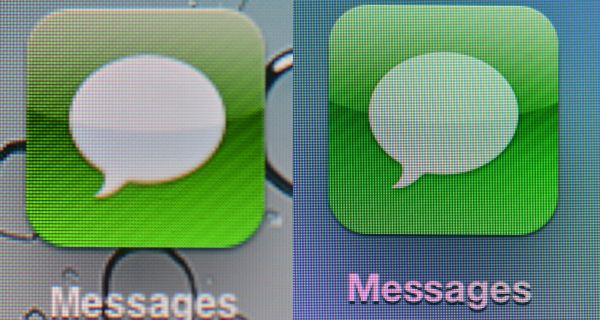 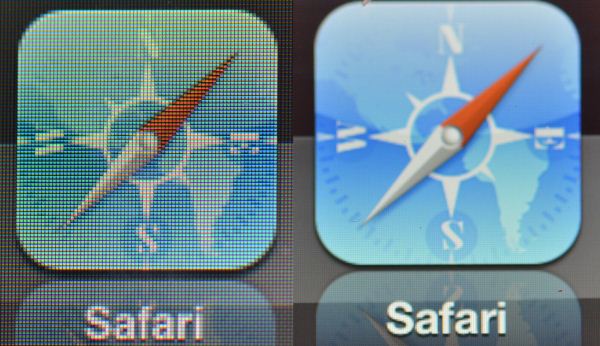 The improvement is dramatic in these macro shots but I do believe that it's just as significant in normal use.

Apple continues to invest heavily in the aspects of its devices that users interact with the most frequently. Spending a significant amount of money on the display makes a lot of sense. Kudos to Apple for pushing the industry forward here. The only downside is supply of these greater-than-HD panels is apparently very limited as a result of Apple buying up most of the production from as many as three different panel vendors. It will be a while before we see Android tablets with comparable resolutions, although we will see 1920 x 1200 Android tablets shipping in this half.