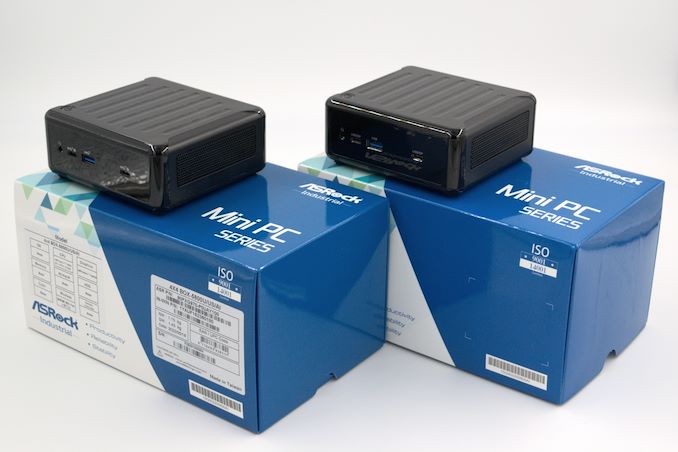 The past few years have seen Intel and AMD delivering new processors in a staggered manner. In the sub-45W category, Intel's incumbency has allowed it to deliver products for both the notebook and ultra-compact form factor (UCFF) within a few months of each other. On the other hand, AMD's focus has been on the high-margin notebook market, with the chips filtering down to the desktop market a year or so down the road. In this context, AMD's Cezanne (most SKUs based on the Zen 3 microarchitecture) and Intel's Tiger Lake went head-to-head last year in the notebook market, while Rembrandt (based on Zen3+) and Alder Lake-P are tussling it out this year. In the desktop space, Cezanne-based mini-PCs started making an appearance a few months back, coinciding with the first wave of Alder Lake-P systems.

ASRock Industrial has the reputation of being one of the first vendors to launch UCFF systems based on the latest available processors from both Intel and AMD. We had reviewed their NUC BOX-1165G7 as our first Tiger Lake-U mini-PC, and the 4X4 BOX-4800U was one of the earliest Renoir-based desktops. The company is continuing the tradition with the NUC BOX-1200 series for Alder Lake-P and the NUC 4X4 BOX-5000 series for Cezanne, with the product announcements coming within a month of each other.

The company sent over the flagship models in both lineups for review, giving us a chance to evaluate the performance and value proposition of the NUC BOX-1260P and 4X4 BOX-5800U. The review below provides a detailed hands-on comparison of the two models. It also brings out various configurable aspects that can be tweaked by the vendor and/or end-user in order to extract the maximum possible performance within the form-factor constraints. In that process, we also gain insights into what helps ASRock Industrial introduce mini-PCs based on the latest processors well ahead of its competitors.

Intel introduced heterogeneous computing into its product line with a mixture of performance (P) and efficiency (E) cores in Alder Lake last year. While the desktop line was first out of the door, Intel followed up with the sub-35W processors in February 2022. Fabricated in Intel 7, Alder Lake brings a multi-tasking focus to computing, providing hints to the OS on where different tasks need to be run. Overall, this is supposed to bring in an better user experience - and the Alder Lake-P series is supposed to deliver all that within a 28W power envelop. On the other hand, AMD's Cezanne was announced in early 2021, bringing the Zen 3 microarchitecture into the notebook space. The 8C/16T configuration of homogeneous high-performance cores provides it the edge in multi-threaded workloads over Intel's solutions.

Despite the introduction of the solutions more than a year apart, the ultra-compact form-factor and small form-factor desktop systems utilizing these processors have started getting into the market around the same time. Both Cezanne and Alder Lake-P utilize an updated microarchitecture, promising a healthy performance boost over the previous generation. The integrated GPU is also clocked higher. On the system front, the high-speed I/O options get carried over from Renoir and Tiger Lake - Cezanne continues to retain PCIe 3.0 lanes for storage, and supplies only USB 3.2 Gen 2 (10 Gbps) ports for high-bandwidth external peripherals. In contrast, Alder Lake-P provides four dedicated CPU-connected PCIe 4.0 lanes for storage drives, and two Thunderbolt 4/USB4 ports for external peripherals. Aspects requiring a deeper look include system performance for various types of workloads and power / energy consumption profiles.

ASRock is a well-known vendor in the consumer PC market. In 2011, the company set up the ASRock Industrial business unit to focus on industrial motherboards. The division branched out in 2018 as an independent vendor with exclusive focus on B2B products. The company has products for deployment in small businesses (offices), automation, robotics, security, and other industrial / IoT applications. Primarily, the company develops motherboards, and sells them to various system integrators who can do their own value additions. Additionally, the company also sells mini-PCs based on the developed motherboards into the retail channel.

ASRock Industrial sampled their flagship models in the Alder Lake-P (NUC BOX-1260P) and Cezanne (4X4 BOX-5800U) lineups. It is rare that two flagship products come in for review simultaneously - so we took the opportunity to evaluate them in parallel. 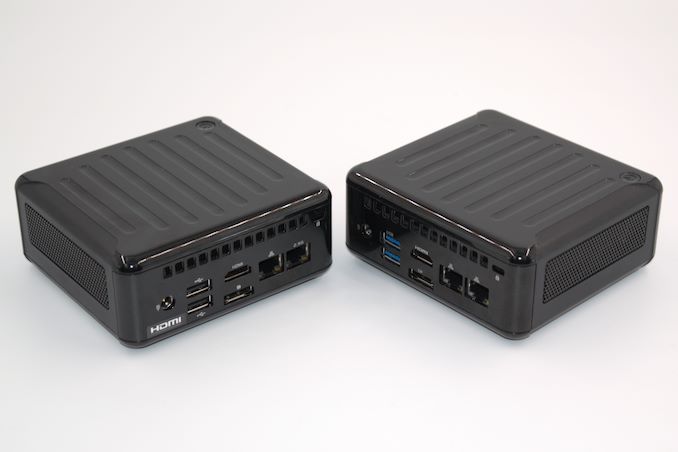 As a reminder, the NUC BOX and 4X4 BOX series both use a chassis tracing its roots back to ASRock's now defunct Beebox product line. The cooling solution is time-tested within that case design, and all that ASRock Industrial does is to alter the I/O cut-outs slightly to match different motherboards. As the above photograph shows, it is difficult to differentiate between the two systems at first glance, as the cut-outs are exactly the same (in fact, the previous-generation NUC BOX-1165G7 and 4X4 BOX-4800U are the same too). Only on a closer look does the presence of two black USB 2.0 ports in the rear I/O of the 4X4 BOX-5800U (compared to the blue USB 3.2 Gen 2 ports in the NUC BOX-1260P) serve as a differentiating factor.

ASRock Industrial's main focus is on B2B customers. It is no surprise that their systems are packaged in a nondescript manner. However, within the package, the company includes everything that an end-user would need - a VESA mount and associated screws, 2.5" drive and M.2 SSD installation aids, a geo-specific power cord and a 90W power adapter. 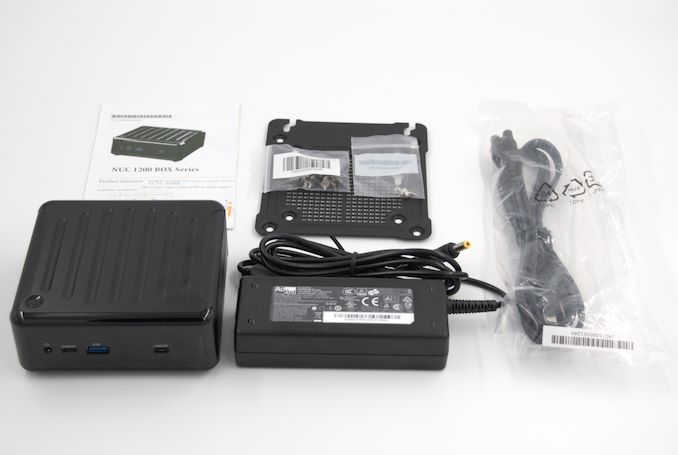 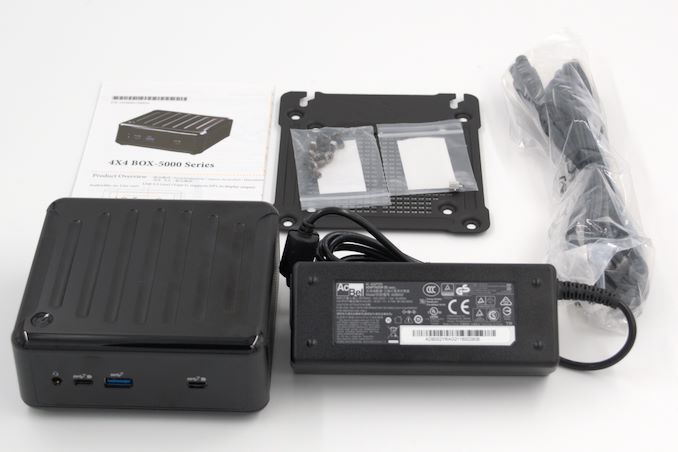 Since our sample of the NUC BOX-1260P was an early engineering sample, it didn't have the model number markings on the underside (unlike the 4X4 BOX-5800U). Both samples were barebones - the RAM and disk drive are left to the discretion of the end-user. In order to make an apples-to-apples comparison, we opted to utilize the same set of components used in the reviews of the company's systems based on Tiger Lake-U and Renoir. The NUC BOX-1260P was equipped with an ADATA XPG GAMMIX S50 Lite and 2x 32GB of the Kingston FURY Impact DDR4-3200 SODIMMs. A Patriot Memory P300 SSD and 2x 32GB Patriot Memory DDR4-3200 SODIMMs were installed in the 4X4 BOX-5800U for evaluation.

Beyond the similar build and industrial design, a closer look at the NUC BOX-1260P and the 4X4 BOX-5800U reveal a number of differentiation aspects both internally and externally. They are summarized in the table below. The rationale behind the (BIOS 1.2E) and the (Performance) suffices are covered in the next section.

The 110 mm x 117.5 mm x 47.85 mm chassis used by ASRock Industrial for both systems is made of polycarbonate, though an inner metal frame does exist. The bottom panel is held by four screws that need to be taken out to access the M.2 and SODIMM slots. The top of the chassis is glossy and easily attracts smudges and fingerprints, though it does come with a plastic film that can be retained without any loss of cooling efficiency. The two sides have perforated windows for air intake. The rear panel has openings on top to allow the internal blower fan to exhaust hot air after passing it through the heat spreader.

A closer look at the two cases and internal pictures are available in the galleries above. It can be seen that ASRock Industrial provides support for mounting a 2.5" drive inside. This makes it difficult to accommodate a thermal gap filler for the M.2 SSD. In fact, the components are densely packed on the board, and even mounting a M.2 2280 SSD requires a special plastic tab that hangs atop one of the USB-C ports on the board. 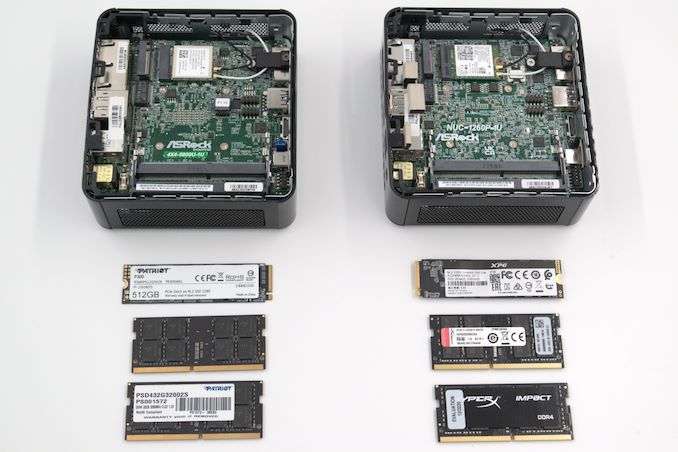