It’s hard not to notice that we’re in the middle of a semiconductor crunch right now. Factories are running at full steam, but pinch points in the supply chain are causing chaos and bottlenecks – whether that means not enough packaging materials, the cost of shipping has increased 10x, or additional tariffs, it’s causing various industries that rely on semiconductors to wait for supply and then pay over expected prices. Nonetheless, everything that is made is being sold, and so all of the big foundries are driving more investment into their supply chain ecosystem as well as raw manufacturing, and Samsung is no different.

Samsung Foundry, as one of the three leading edge foundry offerings on the market, has the same message as the others: invest in production, invest in the supply chain, and offer a wider array of features that customers require. For example, the company announced earlier this year that it plans to spend USD$17 Billion on new manufacturing facilities in the USA by Late 2023, bolstering its US manufacturing beyond the 65nm/14nm S2 facility in Austin (the exact location of the new USA fab is unknown). Samsung also has 4 other fabs in Korea, along with testing and packaging facilities.

As part of the Samsung Foundry Forum 2021 event this week, the company is projecting an almost 2x increase in its wafer output from 2021 to 2026. Using 2017 as a starting point, Samsung states that through the production of its S3/S4 fabs and the first phase of its S5 fab coming online, it currently sits at 1.8x production of the 2017 number. By 2026, as S5 ramps and expands into its second phase, it expects to be around 3.2x (or more) than the 2017 output.

Samsung won’t let us recreate the slide in our briefing, but here are the salient points: 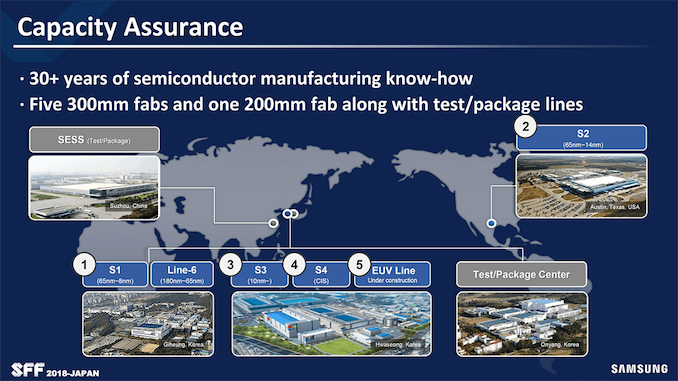 Between now and 2026 Samsung is expanding S5 into phase two as well as constructing the second fab in the USA. When asked for details about the new USA fab, we were told that no new information is coming out at this event, and to wait for further announcements and developments.