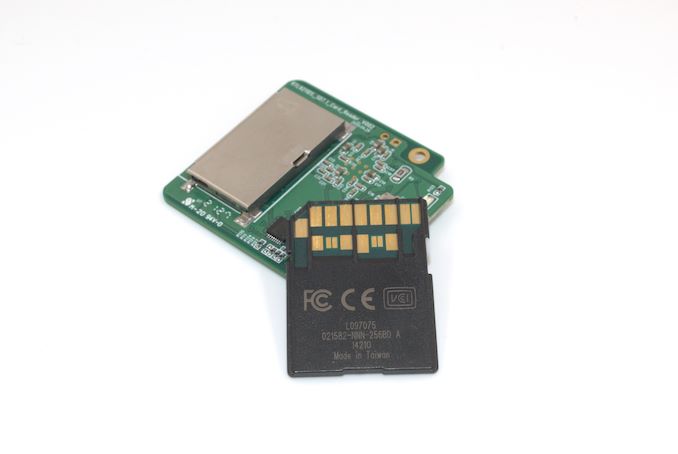 Flash-based removable media, such as SD cards, have a host of use-cases in products ranging from content capture devices to portable game consoles. Many computing systems (including PCs and smartphones) also employ them to augment the available storage capacity. There are two main standards bodies in this segment - the SD Association (SDA) and the CompactFlash Association (CFA), with the SDA is responsible for the Secure Digital cards (SD / microSD), and the CFA has the CompactFlash and CFast card markets.

The products currently servicing this market segment are based on technology standards drafted when SATA was the pinnacle of internal storage performance, but in fact both standards bodies jumped on to the NVMe bandwagon in the late 2010s. Removable memory cards based on PCIe / NVMe are slowly starting to appear in the market - CFexpress from CFA, and SD Express from the SDA. Both ADATA and Lexar have announced plans to launch their SD Express cards within the next few quarters. The cards from both vendors are based on the Silicon Motion SM2708 controller.

Silicon Motion sampled us its SM2708 reference design (with a 250GB capacity) to put through our rigorous memory cards evaluation suite. This review takes a detailed look at the performance of the card in conjunction with Realtek's RTL9211DS card reader reference design. It also serves as a preview of what consumers can expect from SD Express cards appearing in the market over the next few quarters.

Lets Go: The Rise of PCIe and NVMe

SD cards and CompactFlash cards have emerged as the storage media of choice for content capture devices such as digital cameras and camcorders. SD cards have also enjoyed support in the portable game console space and as boot drives for single-board computers. Currently popular SD and CF cards are based on standards developed when SATA ruled the roost as the transfer protocol of choice for internal storage devices.

As PCIe-based NVMe took the SSD storage market by storm, both the SDA and CFA introduced removable card standards based on PCIe. The CFA had actually jumped on to PCIe quite early, with a 1Gbps standard in 2011 - the XQD card format. However, lack of backwards compatibility with existing CompactFlash readers meant that the format never really took off despite making its way into retail. While the original CF cards were based on PATA (the precursor to SATA), a faster version based on SATA was introduced in 2009 as CFast. In 2016, the CFA announced plans for the CFexpress standard and it was published in mid-2017. CFexpress cards retain the XQD form-factor, and a few CFexpress cards are already in the market.

SD cards are also popular in multiple market segments. In order to serve the needs of all serviced markets, the SD Association introduced the NVMe-based SD Express standard (SD 7.0) in 2018, with a SD 8.0 follow-up in 2020. SD cards as well as card readers based on these new standards have been making the rounds at various trade shows since 2019. However, none went on to appear in the retail market. That is about to change in the coming months, with both ADATA and Lexar announcing plans to launch their SD Express cards based on the Silicon Motion SM2708 card controller within the next few quarters.

Consumers need both SD Express cards and card readers in order to take advantage of all the benefits of PCIe / NVMe in the SD form-factor. While SD Express cards are being enabled by controllers such as the SM2708, card readers platforms based on JMicron and Realtek have also appeared in various trade-shows (such as the RTS5261 demonstrated at Computex 2019). Silicon Motion coordinated with Realtek to sample their 250GB SM2708 reference design along with a card reader based on the the Realtek RTL9211DS and RTS5261 for this review. 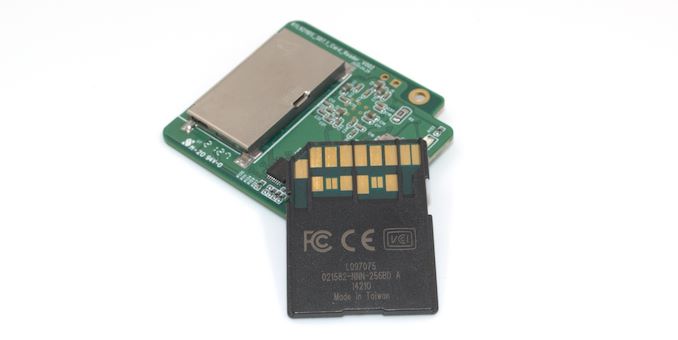 The Silicon Motion SM2708 card controller supports both SD UHS-I and PCIe Gen 3.0 x2 on the upstream side. On the flash side, both Toggle 3.0 and ONFI 4.1 NAND interfaces at 800 MT/s are supported. The controller is restricted to two-channel operation with 8 enables per channel, and both 3D TLC and QLC can be used.

The Realtek card reader is a dual-chip solution that uses the RTL9211DS and RTS5261. The RTL9211DS is more commonly seen in storage bridges that enable M.2 NVMe SSDs to be used with a USB host. It has a USB 3.2 Gen 2 (10 Gbps) upstream interface, and a PCIe 3.0 x2 downstream interface.

The SDA's SD Express standard aims to facilitate the manufacturing of removable cards in the legacy SD and microSD form-factors while retaining basic backwards compatibility. Towards this, the SD Express cards support both the PCIe / NVMe interface, as well as the UHS-I interface.

The pin layout of the SD Express cards are similar to that of UHS-II cards. Depending on the host capabilities, the card controller can switch between legacy SD UHS-I or NVMe modes. The card controller recognizes the host's capabilities based on the supply voltage - PCIe / NVMe requires a 1.8V supply and uses both rows of pins on the card, while the legacy mode is the default and uses only the top row of pins for data transfer. It must be noted that SD 8.0 introduced in 2020 allows for a third row of pins for supporting a second PCIe lane. Due to form-factor limitations, microSD Express doesn't support the two-lane feature.

While initialization may be in either mode, accessing through PCIe enables the card to present itself as a standard NVMe device to the host. This is especially relevant to our evaluation scheme, as S.M.A.R.T access via NVMe allows for temperature tracking and card health monitoring among other features.

The most attractive aspect of the Quartz Canyon NUC is the presence of two PCIe slots (electrically, x16 and x4) for add-in cards. In the absence of a discrete GPU - for which there is no need in a DAS testbed - both slots are available. In fact, we also added a spare SanDisk Extreme PRO M.2 NVMe SSD to the CPU direct-attached M.2 22110 slot in the baseboard in order to avoid DMI bottlenecks when evaluating Thunderbolt 3 devices. This still allows for two add-in cards operating at x8 (x16 electrical) and x4 (x4 electrical). Since the Quartz Canyon NUC doesn't have a native USB 3.2 Gen 2x2 port, Silverstone's SST-ECU06 add-in card was installed in the x4 slot. All non-Thunderbolt devices are tested using the Type-C port enabled by the SST-ECU06.

The specifications of the testbed are summarized in the table below:

The testbed hardware is only one segment of the evaluation. Over the last few years, the typical direct-attached storage workloads for memory cards have also evolved. High bit-rate 4K videos at 60fps have become quite common, and 8K videos are starting to make an appearance. Game install sizes have also grown steadily even in portable game consoles, thanks to high resolution textures and artwork. Keeping these in mind, our evaluation scheme for memory cards involves multiple workloads which are described in detail in the corresponding sections.

The SM2708 reference design was evaluated in two modes - one using the Realtek card reader in SD Express mode, and another using the Lexar Professional Workflow SR2 SDHC / SDXC UHS-II USB 3.0 Reader (used in our standard evaluation of SD / uSD cards) in UHS-I mode. The remaining sections in this review will cover the performance of the card in both these modes along with some observations on power consumptions and thermals.