As part of Intel's Architecture Day 2020 presentations, Raja Koduri spent a bit of time talking about the status of their Optane products. Most of it was a recapitulation of details Intel has previously shared. The two important Optane product updates planned for this year are the Barlow Pass second-generation Optane DC Persistent Memory Modules (DCPMM) and the Alder Stream second-generation Optane NVMe SSDs.

Intel has been teasing their Alder Stream second-generation Optane SSDs since last fall, with promises of off-the-charts performance increases. They've confirmed that Alder Stream will be using second-generation 3D XPoint memory, which moves from two to four layers ("decks" in Intel's slides), making this the first test of the vertical scaling potential of 3D XPoint technology. This combined with with a new SSD controller supporting PCIe 4.0 will enable "multiple millions" of IOPS, more than doubling the throughput of current Optane SSDs. Raja also mentioned that they've made optimizations to single-sector reads, so 4kB QD1 random read latency should be improved a bit as well—but this latency is already substantially limited by the latency of PCIe and NVMe command processing.

Intel recently stated that they have not yet decided where to spun up their own volume manufacturing of 3D XPoint memory, so the second-gen 3D XPoint used in Alder Stream will still be manufactured by former partner Micron and purchased by Intel. 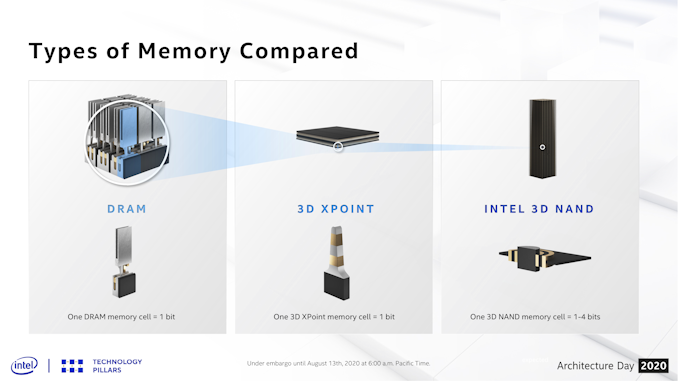 Barlow Pass has already launched alongside Cooper Lake Xeons and will be the Optane DCPMM product for Ice Lake Xeons as well. Intel claims an average of 25% higher bandwidth for Barlow Pass than the initial Apache Pass modules for Cascade Lake Xeons.

The fine print in Intel's slides indicates that the 4-deck 3D XPoint memory used in Alder Stream Optane SSDs is not yet in mass production. That and the omission of any mention of the second-generation, 4-deck 3D XPoint memory in the context of Optane DCPMM products all but confirms that Barlow Pass is still using first-gen 3D XPoint memory. This is consistent with the more modest 25% bandwidth increase as compared to the drastic improvements due to arrive with the Alder Stream SSDs.  It appears that Ice Lake servers will be getting more advanced Optane SSDs than Optane DCPMM modules, as the next generation of Optane DCPMM isn't due until the launch of Sapphire Rapids processors and the switch to DDR5.