The second of our $260 Z490 mini-ITX boards is the MSI MEG Z490I Unify, which is similar in style and design. Forgoing the usual RGB lighting, the MSI Z490I Unify is the epitome of sleek and stylish, at least as far as motherboards are concerned. The board features an all-black aesthetic, with a black PCB and black heatsinks, and has a whole host of features. 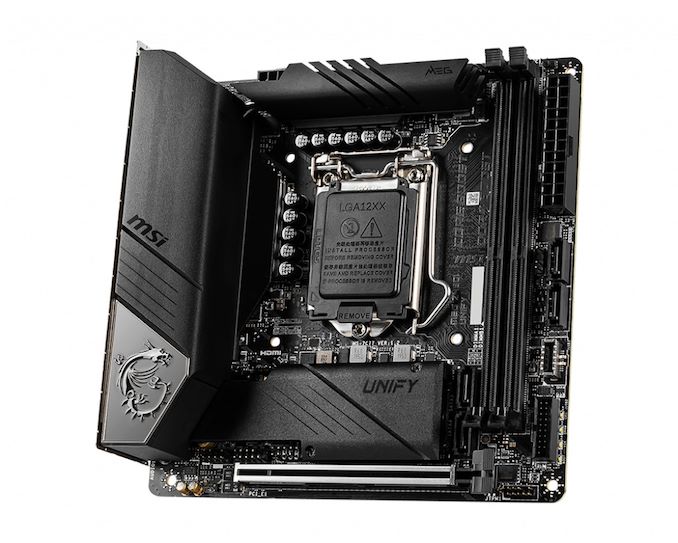 Leading the impressive feature list is the inclusion of an Intel JH7540 Thunderbolt 3 controller, which is exposed as a USB Type-C port on the rear panel. The MSI MEG Z490I Unify is one of just a small selection of Z490 models which include a Thunderbolt 3 controller, while another impressive feat is the 10-layer PCB which adds another premium element to the board. Other features include two PCIe 3.0 x4 M.2 slots, with one located on the front, and another located on the rear, and four SATA ports for conventional SATA drives and other devices such as optical drives.

For hardened enthusiasts, the Z490I Unify has official support for up to DDR4-5000 memory, with a maximum capacity of 64 GB available across two memory slots. Due to size constraints, there's just one full-length PCIe 3.0 x16 slot, which sits along the bottom of the board. Focusing on networking, MSI is using a Realtek RTL8125B 2.5 GbE Ethernet controller, with the boards wireless and BT 5.1 capabilities controlled by an Intel AX201 Wi-Fi 6 CNVi module.

Onboard audio is controlled by a Realtek ALC1220 HD audio codec, which adds five 3.5 mm audio jacks and S/PDIF optical output, but at the cost of extra USB ports. That being said, there is still a USB 3.2 G2 Type-A port, a Thunderbolt 3/USB 3.2 G2 Type-C port, two USB 3.2 G1 Type-A ports, and two USB 2.0 ports. The inclusion of a small cooling fan within the rear panel cover to help keep the power delivery cool also detracts space from the rear panel cover with a fan grill.

Summarizing up the performance in our motherboard test suite, the MSI MEG Z490I Unify has the highest power consumption in our testing from any Z490 model tested so far. The difference between the other boards is marginal, however, and we didn't notice any anomalies in our power testing. This is different in our non-UEFI POST time testing with the Z490I Unify showing the fast POST times from any Z490 board we've tested so far with a default POST time of 10.3 seconds from power-up to Windows 10. We test DPC latency out of the box at stock settings, and the MSI board performed well versus the other boards in our charts. In our CPU and game testing, the MSI Z490I Unify was also competitive with no anomalies found in our testing.

Focusing on overclocking, the MSI MEG Z490I Unify has a solid 9-phase power delivery running in an 8+1 configuration, and uses 90 A power stages throughout. Despite this, we didn't manage to reach the heights we've found so far on our Core i7-10700K, which is 5.3 GHz, despite thermal throttling. The new Comet Lake desktop chips run quite hot at stock, so it doesn't take long when overclocking to hit trouble, but overall the maximum stable overclock we managed to reach on the mini-ITX Unify model was 5.1 GHz. Whether or not it was just our sample in particular, we expected quite a bit more, but the performance was acceptable, and the board's overall VDroop control at default settings were adequate. It did overcompensate a little on CPU VCore, more so than we would have liked. This adds extra heat and with little headroom available on conventional cooling, this is important to consider.

The MSI MEG Z490I Unify is a very solid board in both the aesthetics department and in specifications, and boasts a single Thunderbolt 3 Type-C port on the rear panel. It has some interesting design choices on the rear panel and trades some space for extra capability in cooling the 9-phase power delivery system. Couple that with its 10-layer PCB, dual PCIe 3.0 x4 M.2 slots and 2.5 GbE and Wi-Fi 6 network pairing, the Unify looks to solidify its space in the Z490 mini-ITX market.

The MSI MEG Z490I Unify is a mini-ITX motherboard which slots into the mid-range of MSI's Z490 product stack. Along with Thunderbolt 3 support, the board offers a single Realtek RTL8125B 2.5 GbE Ethernet controller and an Intel AX201 Wi-Fi 6/BT 5.1 CNVi radio. There is two PCIe 3.0 x4 M.2 slots which also support SATA drives, and four SATA ports with support for RAID 0, 1, 5, and 10 arrays. One of the M.2 slots is located on the front of the board with an M.2 heatshield built into the chipset heatsink, while the other is located on the rear of the board.

Memory support is impressive with DDR4-5000 supported officially, although due to size constraints, there is only two memory slots, giving the board a maximum memory capacity of 64 GB. Audio is simplistic with a full five 3.5 mm and S/PDIF optical output powered by a Realtek ALC1220 HD audio codec. However, going full fat on the audio means the board has fewer ports available than the GIGABYTE Z490I Aorus Ultra. It's a trade-off to make the MSI more desirable for overclocking as rear panel space is also taking up by the external vent located on the I/O shield for the small fan which cools the power delivery.

Opening with the design, the MSI MEG Z490I Unify has an all-black and clean aesthetic throughout, with no RGB LEDs found whatsoever across the board. Users looking to add some color can use the two 3-pin RGB headers located along the top of the board. There is a large rear panel cover which covers the power delivery heatsink, which is in two parts and is interconnected via a single heat pipe. This heatsink stretches around the left hand side and top of the board which cools the entirety of the power delivery. It is also using a 10-layer PCB which is superb for a mini-ITX model. Located around the edging of the PCB are three 4-pin headers which are split between one for a CPU fan, one for a water pump, and one for a chassis fan. 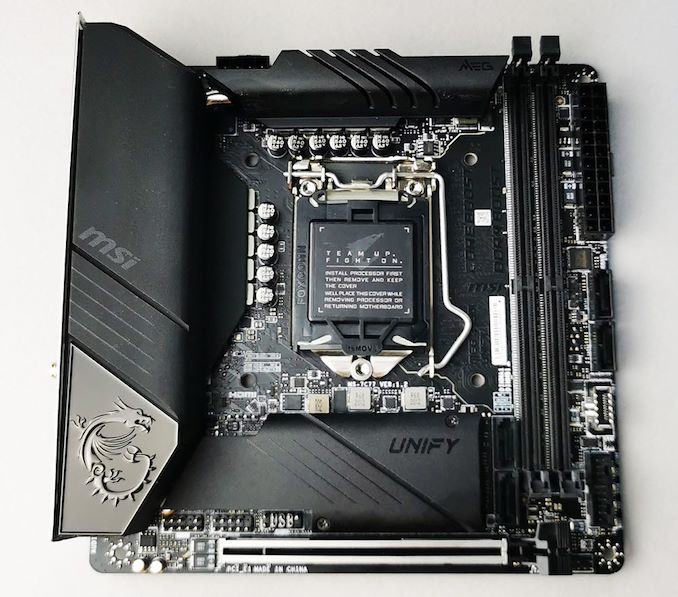 Along the bottom is a single PCIe 3.0 x16 slot, with no space for any additional slots due to the smaller form factor that is mini-ITX. For storage, the MSI Z490I Unify has two PCIe 3.0 x4 M.2 slots, with one located underneath an amalgamated chipset and M.2 heatsink on the front of the board, with the second slot located on the rear of the PCB. There is also a total of four SATA ports with support for RAID 0, 1, 5, and 10 arrays. Despite the obvious limitations on spacing for memory slots on mini-ITX motherboards, the MSI Z490I Unify does provide support for up to DDR4-5000 with a maximum capacity of up to 64 GB across two memory slots. 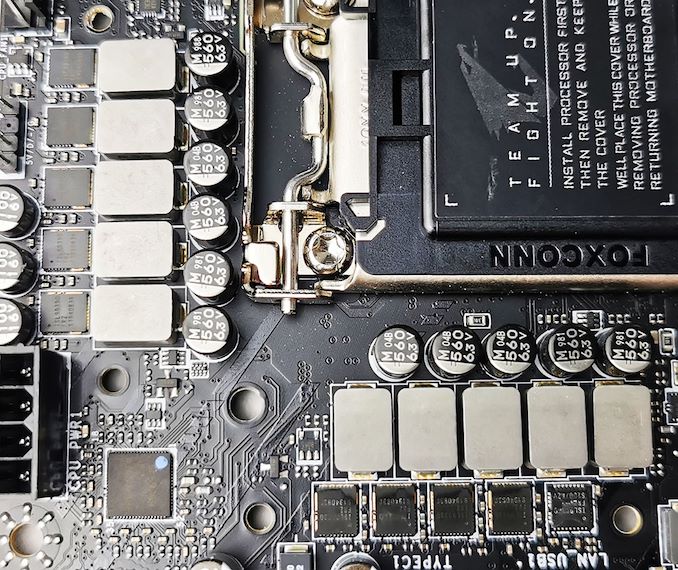 The MSI MEG Z490I Unify is using a simple 9-phase power delivery system operating in an 8+1 configuration. It is using eight Intersil ISL99390 90 A power stages for the CPU section and a single ISL99390 90 A power stage for the SoC. The power delivery is controlled by an Intersil ISL69269 PWM controller. For a mini-ITX motherboard, this is a considerably large and capable power delivery system with a maximum output of 720 A for the CPU VCore. In theory, this means that the Z490I Unify should be a very capable overclocker when used with both ambient and sub-ambient cooling. 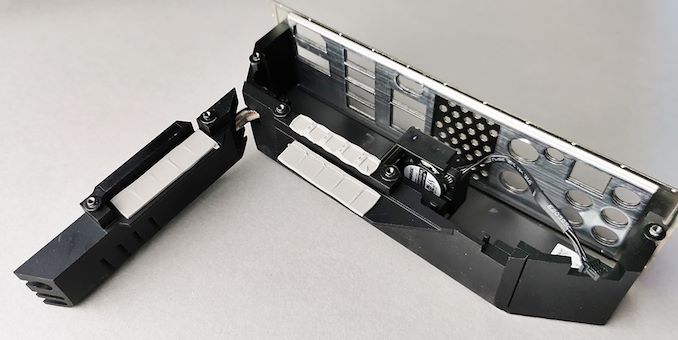 Looking at the power delivery heatsink, one section is affixed to the plastic rear panel cover and is assisted by a small cooling fan with a grill pushing the air out of the rear of the panel. Despite the cooling fan, the heatsink isn't very bulky or weighty, but MSI has pre-applied thermal pads to allow heat transfer between the heatsink and the power stages/MOSFETs. 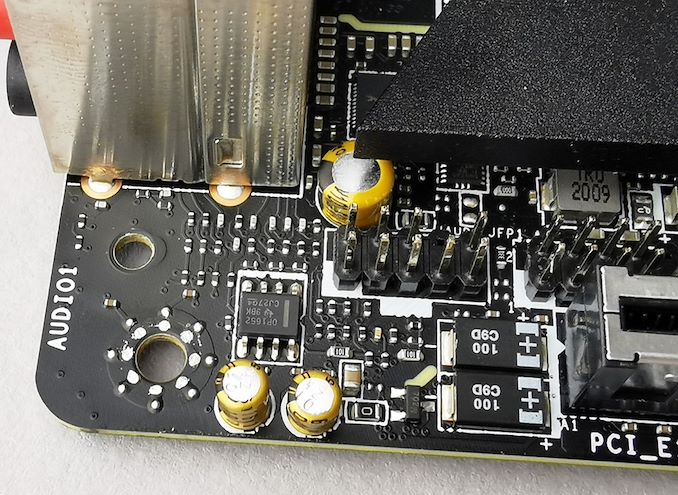 On the audio section of the PCB is a Realtek ALC1220 HD audio codec which is accompanied by three Japanese gold audio capacitors. The codec itself is bare with no EMI shielding, and the audio PCB is separated in part by an opaque line from the rest of the board's componentry.

One of the MSI MEG Z490I Unify's main features is the addition of an Intel JHL7540 Thunderbolt 3 controller, which is exposed on the board's sole rear USB Type-C port. In addition to this are a single USB 3.2 G2 Type-A port, two USB 3.2 G1 Type-A ports, and two USB 2.0 ports. The five 3.5 mm audio jacks and single S/PDIF optical output is controlled by the Realtek ALC1220 HD audio codec, while the board also includes HDMI and DisplayPort outputs. On the networking front, the single RJ45 port is driven by a Realtek RTL8125B 2.5 GbE Ethernet controller, while an Intel AX201 Wi-Fi 6 interface adds support for wireless and BT 5.1 devices. Finishing off the rear panel is a very small clear CMOS button.