It’s the product a lot of users have been waiting for. Ever since AMD introduced the world to its Rome processors, with up to 64 cores based on 7nm chiplets and the Zen 2 microarchitecture, rumors have been swirling about what exactly the corresponding Threadripper platform will bring. We now have the answers to your questions. 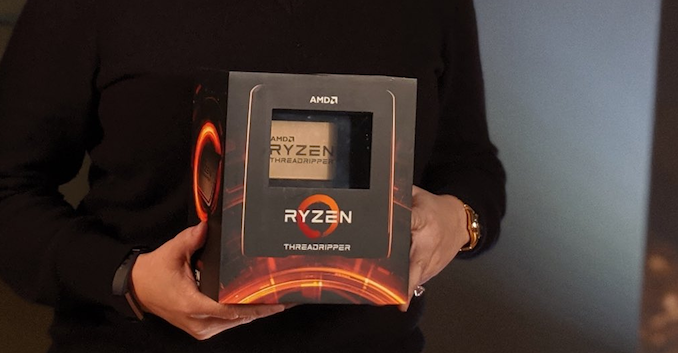 The two processors that AMD will be initially launching in the 3rd Generation Ryzen Threadripper family are the TR 3960X and the TR 3970X. These are 24-core and 32-core parts respectively, built using four chiplets and one IO die in a Rome-sized package. Both CPUs will feature a 280 W TDP, and offer boost frequencies up to 4.5 GHz.

There’s a lot to unpack here. 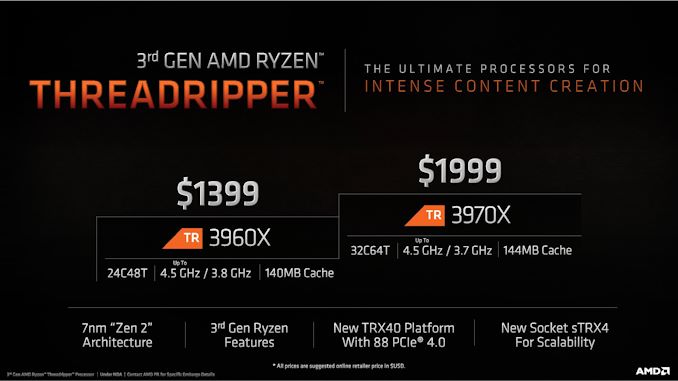 Both CPUs have 128 MB of L3 cache, due to the use of four chiplets. We asked AMD if these CPUs have 4 chiplets inside the package and 4 dummy ones, like the dummy silicon in previous Threadripper products – AMD confirmed that there will only be four chiplets in each package. This means that each CPU will be in a symmetrical 6+6+6+6 or 8+8+8+8 configuration, minimizing the total amount of silicon AMD has to ship.

Each CPU supports four channels of DDR4-3200. We confirmed that this included support for ECC UDIMMs on a board-by-board basis, but does not include RDIMM or LRDIMM support. AMD did state that these new CPUs are validated for the 32 GB DDR4 modules coming onto the market, which makes a realistic maximum DRAM support of 256GB (8 x 32GB).

For performance, AMD gave us some numbers comparing each CPU to the 18-core Core i9-9980XE from Intel. In common workstation tasks, such as program compilation, Adobe Premier transcoding, and rendering, AMD is quoting a +22-31% performance gain for the 24-core part, and a +36-49% uplift for the 32-core part.

When we asked AMD about AI performance, they stated that while AI is an emerging workload in the enterprise space, for the workstation market these products are targeting exactly what their customers are requesting today: ‘Threadripper and Zen 2 have been taken by customers looking at content creation, CAD, and code work/compilation. AI is still an emerging vertical in the workstation at this time.’ 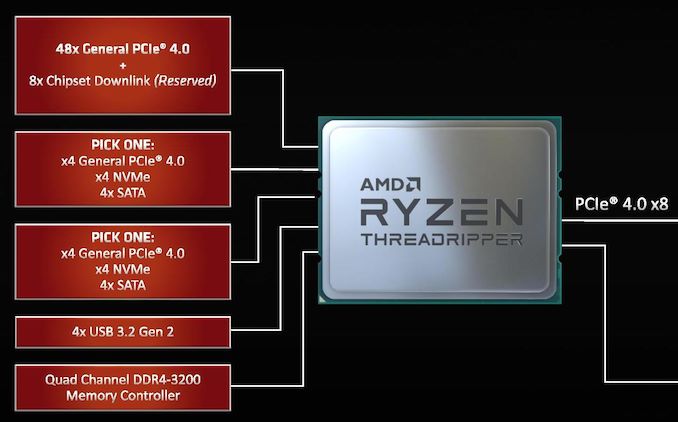 Compared to previous generation Threadripper parts, the new 3rd Gen Ryzen Threadripper features a central I/O die in the hardware which all the chiplets are connected to. This I/O die has all the PCIe lanes and the DRAM channels, which means that the memory latency issues with the 1st/2nd Generation Threadripper should no longer be present with the new chips. Both chips launched here have 64 PCIe 4.0 lanes, which are split into 48x general purpose lanes, 8 lanes for the CPU-to-chipset communications, and 8 lanes for I/O. This means that users can have the following CPU configurations:

Obviously things like SATA ports can also come off the chipset. We discuss the new chipset on the next page. But one thing to note here is the CPU-to-chipset connection.

For AMD Ryzen on most AM4 chipsets, for first generation and second generation Threadripper, and for every Intel platform in recent memory, the connection between the CPU and the chipset has been the equivalent of a PCIe 3.0 x4 link. This link, as the industry has progressed into the world of NVMe storage, has become a bottleneck for any user wishing to push a modern PCIe-based storage drive along with anything else on the same uplink. AMD increased it for the X570 motherboard generation to PCIe 4.0 x4 for mainstream, doubling the bandwidth from its closest competitor, but what AMD is doing with the new 3rd Gen Threadripper is increasing that link bandwidth by a factor of two again.

With this CPU, and the TRX40 chipset, users now have a PCIe 4.0 x8 link between the CPU and the chipset. This is the equivalent of a PCIe 3.0 x16 link, or a previous generation full GPU slot. It means that users could, if they wanted, push four times as much data up and down that link. To be honest, this sort of thing should have happened a while go on the Intel side of the equation, so I’m glad that AMD is pushing the boundaries here. It’s also one reason for 3rd Gen Threadripper having a new socket. 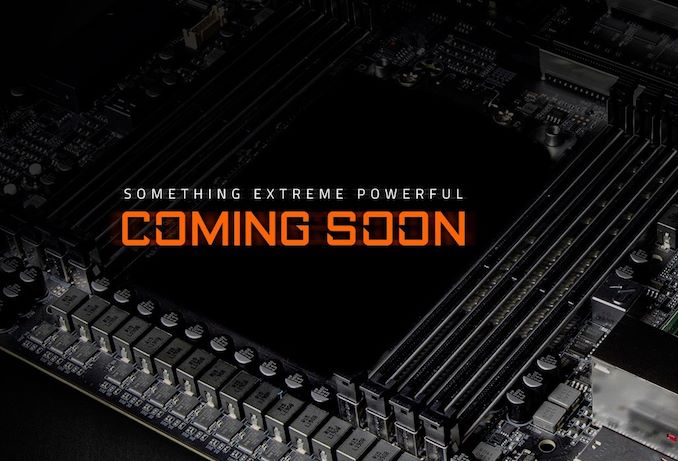 Yes, you read that correctly: the new Threadripper requires a new socket. Because of the new CPU-to-chipset link, as well as a few ‘forward looking adjustments and scalability’, we now have what AMD are calling an sTRX4 socket and related TRX40 motherboards. AMD wasn’t prepared to make a statement on the record about committing to this socket long term, but stated that adjustments were made to ensure the future longevity of the platform, so one could infer at least one more generation on this new socket. Technically it is the same 4094 pins as the previous socket, and even the keying (the marks along the side of the processor) is the same, however AMD stated that due to this new PCIe 4.0 x8 requirement, if you put a new processor in an old motherboard (or vice versa), it just won’t work.

As for the motherboards, expect a few new parts to enter the market. More details on TRX40 on the next page.

But motherboards aside, I just want to point out that AMD's numbering scheme leaves some room at the top. Above the 3970X, there leaves the potential for a 3980X and 3990X. We know that these CPUs are based on the same layouts as AMD's Rome-based EPYC processors, and those are offered with 48-core and 64-core variants. We may be at a practical TDP limit of 280W, but if there's more room at the top, AMD might take it. At this point, AMD has said that they are only announcing two SKUs today and declined to answer the question of whether any more are coming.