It’s no secret that at this early point in the lifecycle of VR that there are many different platforms, solutions and paths to choose from when it comes to content and standards for motion and control. Due to the range of APIs created for game engines and different VR solutions, such as Steam VR, Oculus, OSVR, Daydream etc., it can be difficult for developers to create one-application-fits-all software. As a result, their software typically ends up specializing for a particular VR solution over others. This can arguably limit industry growth at the expense of differentiation.

The goal of the new Khronos VR Standards initiative, announced this week, is to create a set of standard APIs that portable VR applications and engines can use to interface with different hardware and vendor device drivers. Much in the same way that Vulkan is designed to be a low-level graphics standard that can target any capable set of hardware and software, the end goal here is to have a sufficient number of companies and developers on board to create a singular API interface for all future VR development, making a single app compatible with any device and software stack that adheres to the new standard(s). 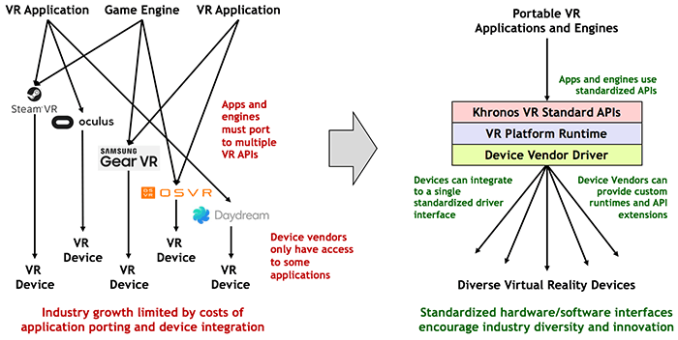 At this time, Khronos is only putting out the announcement that this new VR Standards Initiative is in the early stages and encouraging companies in the VR space to get on board. The usual suspects are publicly participating (Google, Oculus, Valve, Intel, AMD, ARM, NVIDIA, EPIC Games, Razer, Tobii), and we were told that a number of other companies are also involved but not publicly at this time (we questioned Khronos about Microsoft, and Chinese participants as well).

Khronos confirmed that this is still early days for the initiative, at the point where the scope of the specification is still being determined. As a result, aside from headset tracking, controllers and other devices in a VR runtime, the scope could go beyond simple VR implementations and move to delocalized streaming and virtualized environments, depending on the participants in the Initiative. We were told that typical Khronos cycles for this sort of thing are 18-24 months before a ratified standard is in place.

“Khronos has been on the forefront of advanced graphics and system APIs for over 15 years, and in keeping with that tradition and obligation to the industry at large has embarked on a new, vitally needed set of APIs and standards for the emerging VR market. We applaud the industry-leading companies that are coming together as Khronos members for this endeavor, and expect the whole industry will share our sentiment,” said Jon Peddie, President of JPR.

Any company interested in participating should get in contact with Khronos. There have been some initial presentations at SIGGRAPH Asia this week.