In and Around the Fractal Design Define R3

If you read our review of the Fractal Design Arc Midi, the Define R3's interior is going to seem pretty familiar. That's not necessarily a bad thing; Fractal Design brings a lot of smart ideas to the table with the two enclosures, and the R3 in particular seems to really maximize its internal real estate compared to some of the competition. It's not a big case, but there's a lot to it. 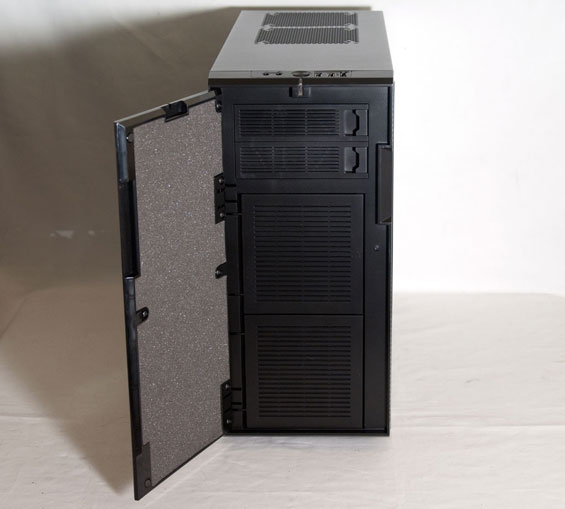 Before we get to that, though, the basics: the R3 uses a foam-padded door on the front to keep the noise in, but unlike Antec's older P180 series designs, Fractal Design wisely places the power button and I/O ports at the top of the enclosure, above the door. The result is a door that becomes less of a nuisance and more functional. When you open it, you'll find the two 120mm fan mounts (one of which is occupied) as well as just two 5.25" drive bays. Some users might chafe at the notion of being stuck with just two bays, but I honestly prefer it for most enclosures. Surrounding the door on the outside is a ventilated region that allows the intake fan to pull in air from the sides; this is an improvement over NZXT's H2, whose door threatens to completely suffocate the intakes, but it feels minimal compared to the intakes in Antec's P180 series.

The sides and bottom of the enclosure are pretty much what you've come to expect, with two fan mounts on the top, one on the side, and one on the bottom, but the difference here is that every mount but the bottom one is basically sealed off with removable acoustic foam panels. This honestly feels like such a good idea that I'm baffled as to why it's not more common, because it basically allows the R3 to succeed either as a quiet case or as a performance case (provided you add additional fans), as well as offering several points in between. I love it, and I wish more enclosure designers would implement something like this. Moving around to the back of the enclosure we see Fractal Design's traditional set of white expansion slot covers and the white exhaust fan, but otherwise nothing particularly noteworthy. 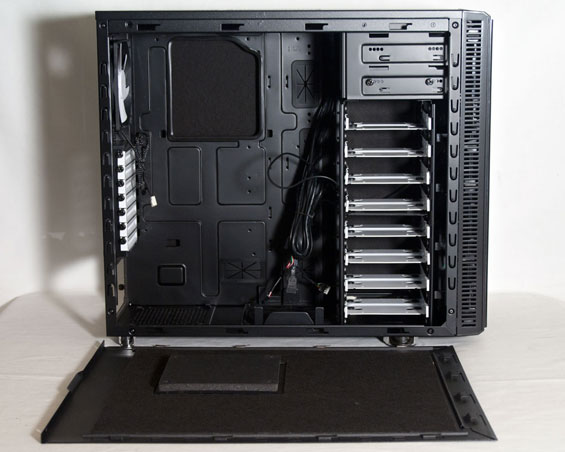 When you pop the R3 open, though, you'll see an interior that's largely well designed and really maximizes the available space. A friend of mine is in the market for a new case, and when I showed her the R3 she actually called the eight drive trays "extravagant." That may very well be, but they're an appreciated amount of expansion (even if a touch excessive), and the lateral mounting allows for easy cable routing to behind the motherboard tray. Fractal Design also includes the usual grommet-lined holes for cable routing, but they're a touch smaller in the R3. As for expansion clearance, odds are you're not going to be fitting an AMD Radeon HD 6990 or ASUS Mars II in here, but if you can afford either of those, why are you buying a $100 case? I found the clearance for power supplies, expansion cards, and CPU cooling to be just right.

Fractal Design has also padded both side panels, a much appreciated gesture keeping in line with the R3's ambitions as a silent chassis.

Ultimately I'm a fan of the R3's aesthetics (particularly the blue LED at the top center of the case that goes up and around the power button), and it's been my experience that a lot of you also like these generally sleek, minimalistic designs. The good news I have for you is that you've spoken and it seems the vendors are listening, given what Fractal Design is doing, along with BitFenix and some others. Even a recent conversation with Antec about the upcoming P280 suggests you're being heard loud and clear.