The battle between Intel and AMD fighting over market share is hotter than it has ever been. With each of the two colossal chip makers doing battle for brand supremacy, we've seen two primary desktop chipsets set the standard in the world of desktop motherboards; the Z390 and X570 chipsets. While the Z390 market is now mature, ASRock launched two new motherboards into its Intel Z390 product stack, and today we are taking a look at one of them, the ASRock Z390 Phantom Gaming 7. With a feature set spearheaded by a 2.5 GbE port, it sits between the ASRock Z390 Phantom Gaming 9 and Z390 Phantom Gaming 6, aiming for a more mid-range user. 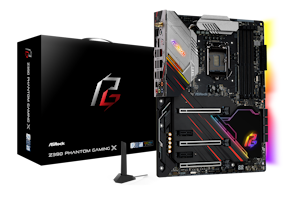