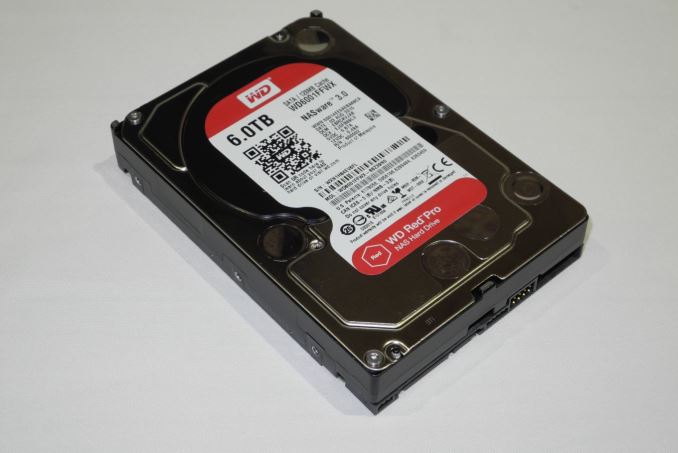 Despite the increasing affordability of SSDs, hard drives continue to remain the storage medium of choice for applications where capacity and cost factors outweigh performance requirements. Specialty drives have become the order of the day, with hard drive vendors having separate lineups to target different market segments such as desktop computers, SOHO NAS units, SMB / SME NAS units and NVRs. Western Digital was the first to introduce a 6 TB drive in the SOHO NAS drive space, but Seagate came back a few months later with a souped-up 6 TB Enterprise NAS HDD targeting the SMB / SME NAS units. Last month, Western Digital finally released the 6 TB version of the WD Red Pro for the SMB / SME NAS units.

We have already had comprehensive coverage of a number of 4 TB NAS drives and a few 6 TB ones. As more high-capacity drives started getting into the market, we started reviewing them standalone. The results from our evaluation of the WD Red Pro 6 TB is presented in this review.

The correct choice of hard drives for a NAS system is influenced by a number of factors. These include expected workloads, performance requirements and power consumption restrictions, amongst others. In this review, we will discuss some of these aspects while comparing the WD Red Pro against other drives targeting the NAS market. The list of drives that we will be looking at today is listed below.

Prior to proceeding with the actual review, it must be made clear that the above drives do not target the same specific market. For example, the HGST Deskstar NAS and WD Red are for 1- 8 bay NAS systems in the tower form factor. The WD Red Pro is meant for rackmount units up to 16 bays, but is not intended to be a replacement for drives such as the WD Re.

Our NAS drive evaluation methodology consists of putting the units to test under both DAS and NAS environments. We first start off with a feature set comparison of the various drives, followed by a look at the raw performance when connected directly to a SATA 6 Gbps port. In the same PC, we also evaluate the performance of the drive using some aspects of our direct attached storage (DAS) testing methodology. For evaluation in a NAS environment, we configure three drives of each model in a RAID-5 volume and process selected benchmarks from our standard NAS review methodology. Since our NAS drive testbed supports both SATA and SAS drives, but our DAS testbed doesn't, only SATA drives are subject to the DAS benchmarks.

We used two testbeds in our evaluation, one for benchmarking the raw drive and DAS performance and the other for evaluating performance when placed in a NAS unit.

In the above testbed, the hot swap bays of the Corsair Air 540 have to be singled out for special mention.
They were quite helpful in getting the drives processed in a fast and efficient manner for benchmarking. For NAS evaluation, we used the QNAP TS-EC1279U-SAS-RP. This is very similar to the unit we reviewed last year, except that we have a slightly faster CPU, more RAM and support for both SATA and SAS drives.

The NAS setup itself was subjected to benchmarking using our standard NAS testbed.