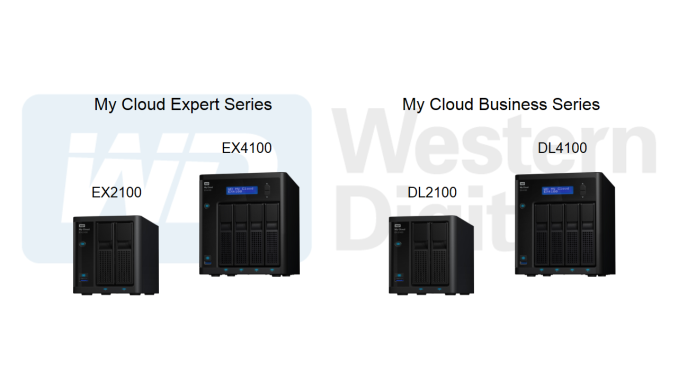 Western Digital is no stranger to the NAS market. Their Sentinel series units (based on Windows Storage Server) have targeted business users for quite some time now. The My Cloud consumer series (1- and 2-bay NAS units based on a custom embedded Linux platform) introduced a few years back targets home users. These two product lines cover the two extreme ends of the market for NAS units costing up to $5000. In late 2013, Western Digital launched the My Cloud Expert series with the introduction of the 4-bay WD My Cloud EX4. This was followed by a 2-bay version in March 2014.

It has been almost a year since Western Digital last updated their hardware offerings, but the firmware and user-experience improvements have been coming in periodically (indicating long-term commitment to this market segment). Today, two sets of products are being introduced to cover the whole range of this NAS market segment:

From an external viewpoint, all the NAS units being introduced today come with dual GbE ports and a couple of USB 3.0 ports. Similar to previous generation EX units, the new ones also come with two power adapter inputs.

The EX2100 and EX4100 are one of the first NAS units based on the new Marvell Riverwood platform (ARMADA 385 / 388). These are dual-core Cortex-A9-based SoCs running at up to 1.6 GHz. The 2-bay unit comes with the ARMADA 385 and has 1 GB of RAM, while the 4-bay unit sports the ARMADA 388 and has 2 GB of RAM. The main difference between the ARMADA 385 and 388 is the presence of two vs. four native SATA ports. We will look more into the SoC platform in our dedicated review.

The DL2100 and DL4100 are based on the Intel Rangeley SoCs. Based on the Silvermont Atom cores, these SoCs have been quite popular with COTS NAS vendors over the last year (with Seagate's NAS Pro lineup as well as the Synology DSx15(+) series utilizing them). The 2-bay DL2100 is based on the 2C/2T Atom C2350 running at 1.7 GHz and sports 1 GB of RAM. The 4-bay DL4100 is based on the Atom C2338 and has 2 GB of RAM. The clock speeds and features are similar for both SoCs, though the C2350 has a slightly lower TDP (6W vs. 7W). On the software front, the DL series some with extensive Active Directory support, stressing its business focus.

The updated EX models and the new DL models round up Western Digital's offerings in this market segment. They now have units available for different needs and performance levels. The addition of Linux-based business NAS models help in reducing the costs for the small business market segment. 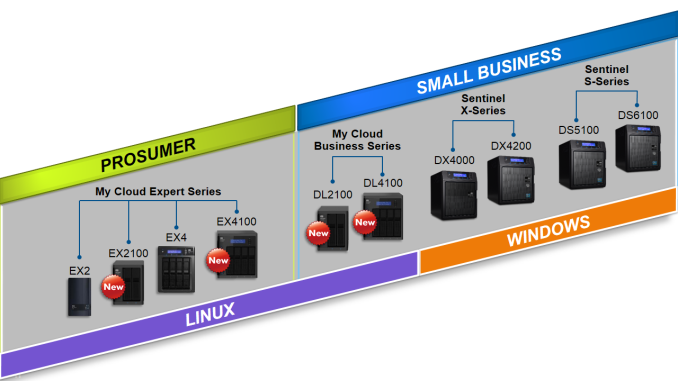 Western Digital has a number of features (both in hardware and the My Cloud OS) that make it stand out amongst the multitude of offerings from various vendors in this market space:

The pricing for the various models / capacities is provided in the table below:

Similar to Seagate's NAS and NAS Pro offerings, the updated hardware platforms and the tying together of the NAS and the storage media will help Western Digital expand their already growing presence in this market segment. The existing channel presence will also provide an additional advantage. Performance evaluation of the EX4100 as well as the DL4100 and comparison with other models in this market segment will be available in the reviews slated to go out over the next few days.