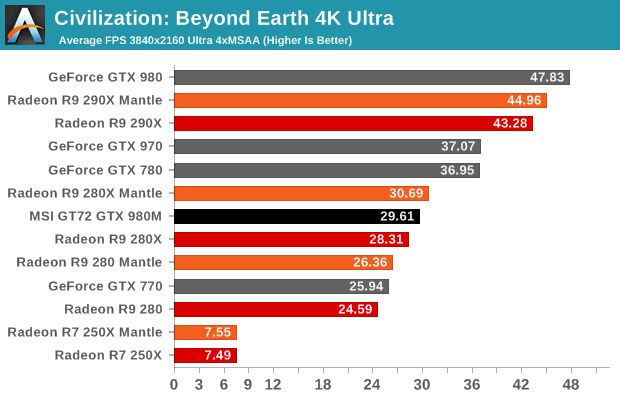 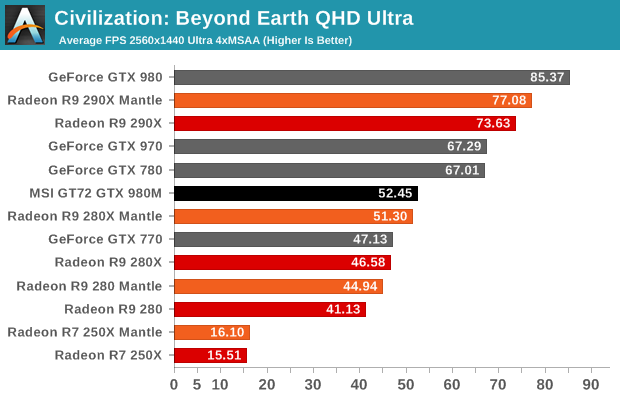 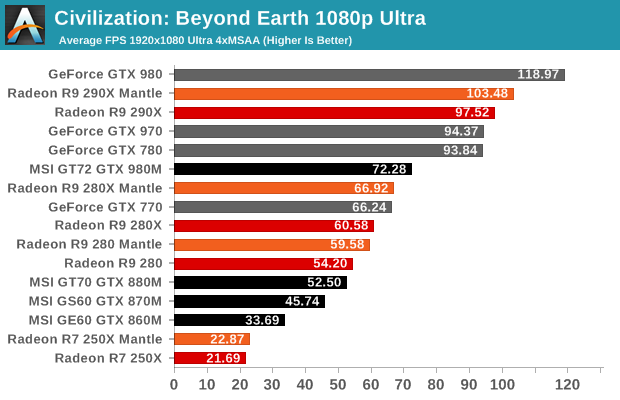 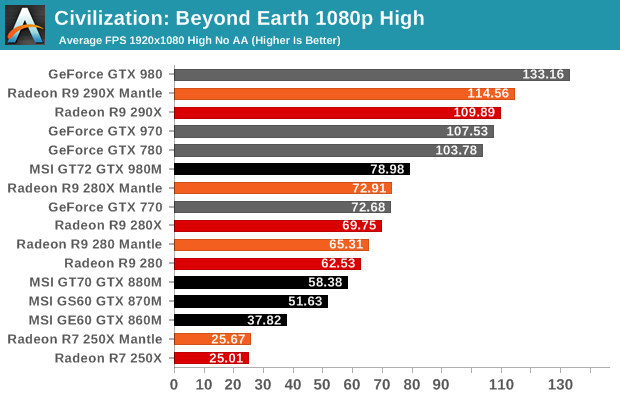 I wouldn't expect many games to run well at a 4K resolution with Ultra quality settings and 4xMSAA, especially when running a single GPU, but Civilization: Beyond Earth proves to be relatively forgiving. The GeForce GTX 980 tops our charts for performance (AMD says their R9 290X 8GB card should be slightly faster – though that claim was made before NVIDIA released their Game Ready 344.48 drivers), with the R9 290X coming in second place. In terms of pure bang for the buck, the R9 290X is of course the winner, since it can now be had for well under $400.

Meanwhile the GTX 970 and GTX 780 are basically in a dead heat for third place (the R9 290, which I don't have, would likely come in slightly ahead of the GTX 970). Somewhat surprisingly, even the venerable R9 280X is able to break the 30FPS mark, at least with the slight boost it receives courtesy of Mantle.

What the performance figures don't necessarily show – and what is immediately obvious when you're swapping between GPUs – is just how loud the R9 280/280X/290X blower GPUs can get! It's seriously almost laughable how hard the fans are working on my AMD GPUs. There are definitely quieter Radeon R9 GPUs, but even then they're going to be hard pressed to match the GTX 970 or 980.

Dropping to 2560x1440, nearly all of our tested GPUs break the 30FPS mark with room to spare, though minimum frame rates can at times be in the sub-20 range. However, since Civilization isn't exactly the sort of game where fast reflexes are required, the occasional stutter won't be too much of a problem. Our overall rankings remain basically unchanged – and that holds for testing at 1920x1080 as well (for both Ultra + 4xMSAA and High + No AA settings).

Lest anyone get the idea that Civilization: Beyond Earth isn't a taxing game, do pay attention to the R7 250X results. Even at 1080p High, it's still languishing in the sub-30 FPS realm; you'll need to drop the quality and/or resolution another notch to get above 30FPS with that level of hardware. (Note that the MSI GE60 GPU is basically the same as a GTX 750 Ti, so you can use that as a reference point for $120-$150 GPUs.)

Moving over to the notebook side of things, first I need to point out a problem that came up in testing: the MSI GS60 basically wouldn't work properly at higher resolutions, even with an external display. Civilization: Beyond Earth would simply crash during the loading process, possibly due to problems with video decoding. I don't know if the issue is with the Intel GPU at High DPI resolutions or an Optimus problem or something else, but if you load the game with a lower resolution (e.g. 1920x1080), everything is okay.

As for the GE60, it only has an HDMI output, so I couldn't test at anything above 1920x1080 regardless. The MSI GT70 with 880M on the other hand doesn't use the Intel GPU for the DisplayPort connection, effectively bypassing Optimus it seems; I need to go back and retest at some point, but it will probably be a while.

Even the MSI GS60 with its 3K panel wouldn't work at the native resolution, so that's at least one bug to fix (though whether it's in the game, the Intel drivers, or the NVIDIA drivers I couldn't say). Ultimately, I was only able to test most of the notebooks at 1080p Ultra and High settings. The exception is the GT72 with GTX 980M, which worked fine with the Acer XB280HK.

As far as performance goes, all of the notebooks are able to handle Civilization: Beyond Earth at 1080p, and the 980M has plenty of juice left in the tank for even higher resolutions. The GTX 860M on the other hand struggles a bit to stay above 30FPS in the most demanding scenarios (basically zoomed out all the way with tons of units on most of the hexes), but overall it's still very playable – and on smaller maps as well as earlier in the game, performance will be much higher than the built-in benchmark results. We're also likely hitting a bit of CPU bottlenecks on the faster laptops, though it's probably not enough to really matter. Even with a slightly slower CPU, the GTX 980M is able to consistently run faster than the GTX 880M.

Flipping over to the AMD Mantle vs. DX11 side of things, Mantle tends to provide a consistent though small improvement in performance. Even the lowly R7 250X sees marginal improvements in performance at settings that are otherwise too high for the GPU, to the tune of 3-5% increases in performance at 1080p. You would probably think that Mantle will benefit the fastest GPUs the most, but that doesn't appear to be the case either; the R9 280 and R9 280X see the biggest improvements (8-10% at our Ultra settings), while the R9 290X gets a slightly less impressive bump (4-6% faster). Also somewhat unusual compared to other Mantle games we've looked at is that our less demanding High quality settings see a smaller improvement than the Ultra settings.

While Mantle gives developers more control over the hardware, unfortunately that means developers also have to do a bit more optimization work to wring the most performance out of each different GPU. The R9 280/280X have been very popular cards so they're in widespread use, while the newer R9 290X may not be reaching its full potential yet. But of course there's another topic to discuss with Mantle….