The initial set of Z97 reviews demonstrated that most motherboard manufacturers were implementing at least one the new storage options offered by the chipset: SATA Express and M.2.  The motherboard we are testing today, the Z97-Pro, uses both but incorporates a switching system so only one is active at the time.  Similarly to the Z97-Deluxe which we have reviewed, ASUS’ new brushed metalling gold design is here on the Z97-Pro as well.

The birth of SATAe and M.2 in the market is a strangely complicated one. Both of these new standards, despite the lack of drives for end-users to purchase, require two of the eight lanes from the chipset in order to function, as well as two SATA 6 Gbps ports for SATA modes. One would suggest that this requires four PCIe lanes in order to incorporate both onto a product; however the current solutions we have seen show that the lane allocation is shared by both M.2 and SATAe, meaning that using one disables the other. Sharing lanes is nothing new for motherboards, where we might see a PCIe 2.0 x4 slot share lanes with controllers or PCIe 2.0 x1 slots. Compounding this fact, Intel only officially supports their storage technology on a single x2 at a time and not both, suggesting that the switch method is the only appropriate way to evolve the situation. This leaves motherboards that use both of these technologies, when the products come to market, in a precarious position. The Z97-Pro takes the brunt of this head-on, as it were. While it is impossible to implement RST on two PCIe storage ports at once, a manufacturer can use an ASMedia controller for a SATAe port, which also consumes PCIe lanes and adds cost.

The Z97-Pro aims to tackle the large landscape of motherboard offerings around the $188 region, or $200 with added 802.11ac for the WIFI AC variant. This price bracket features others such as the Z97X-SOC, Fatal1ty Z97 and Z97 Gaming 7, all of which are aimed to sell with their respective crowds.

We examined the software and BIOS offerings of the ASUS Z97 range with the Z97-Deluxe which show a continued improvement over ASUS’ generational cadence, although the BIOS aesthetic recommendations still stand. Fan controls allow every fan header on board to be controlled through DC or PWM, and the built-in BIOS fan testing system helps expedite accurate fan profiles. The EZ OC mode in the BIOS also gives users a more targeted look at automatic overclocks. The software has a new trick in Turbo App, giving users overclock granularity on a per-program basis, as well as new overclocking options for stress testing.

Performance of the Z97-Pro shines out via the onboard audio (an enhanced Realtek ALC1150 solution with PCB separation, filter caps and DTS support) and Z97's excellent DPC Latency, however our early pre-release BIOS had a long POST time, suggesting that users should update the BIOS ASAP in case this has changed. Power consumption was a little higher than expected, but still in reasonable limits. USB 2.0 speed was boosted by the in-built Turbo mode, giving a sub 40-second result.

The Z97-Pro offers a WiFi version using a 2T2R 802.11ac WiFi module, situated on the rear IO. I am a big fan of integrated WiFi solutions on the rear IO rather, but the original increase in price for the version with the module was $30 might seem a little high. However, now the difference is $12 and given that the WiFi module is unavailable as a separate purchase, users with WiFi needs (such as myself who tests machines in a different room with no wired Ethernet access) should consider the WiFi version because even at $200 the system seems to punch above its weight. Normally when I review a system I keep a list of oddities, issues, irregularities or interesting tidbits of information as I test in order to help shape the review. With the Z97-Pro, my list contained a total of zero entries, indicating that it just worked as it said it should. This is sometimes an oddly rare occurrence in a mature industry.

The brushed metallic look we saw with the Z97-Deluxe is here on the Z97-Pro as well, as shown on the two power delivery heatsinks and the new styled circular chipset heatsink. I hate to use artsy words to describe a motherboard, but I feel like I want to use the word ‘contemporary’, whatever that means. The ASUSDESIGN logo adorns one of the heatsinks, and the rest of the motherboard attempts to use two shades of black for the rest of the ports and slots. The switches and rear IO keep their silvery look. 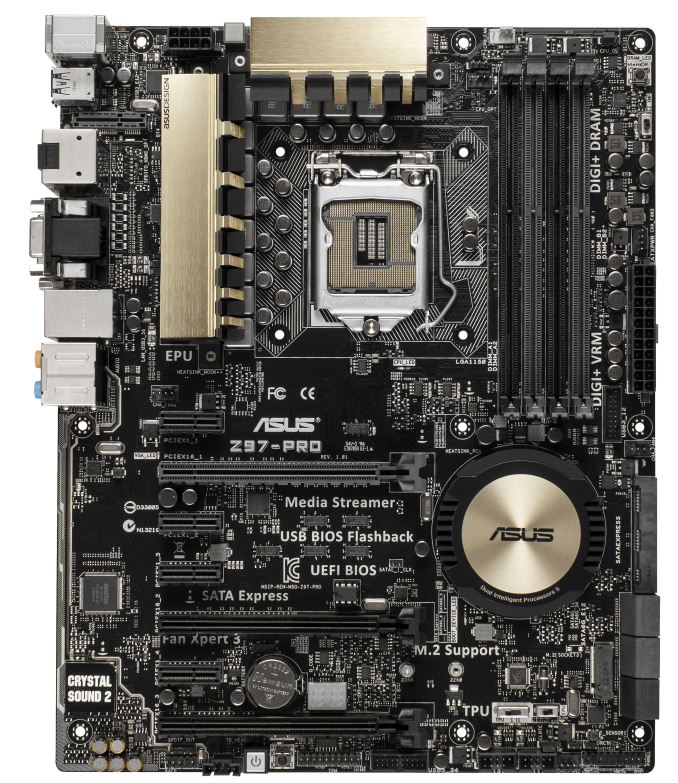 The socket area is bounded on two sides of the minimum Intel specifications by power delivery chokes and on a third side by the DRAM slots. As with most motherboards in this segment, the heatsinks are designed to allow large coolers, however due to the close proximity of the DRAM slots, users with taller memory might have to rely on slightly smaller CPU coolers in order to fit a full set of memory.

In the socket area the user has access to four fan headers: one to the bottom left below the power delivery heatsink, the two CPU headers between the top heatsink and the DRAM, and a final header just above the 24-pin ATX power connector. At a stretch there is a fifth within reach of the socket, just below the 24-pin, while the sixth and final fan header is at the bottom of the motherboard.

The DRAM slots are color coordinated for the two memory channels, and all four slots use a single sided latch mechanism for easier memory removal. With this system users should be aware that installing memory requires a double check to make sure it is seated in the slot correctly.

At the top right of the motherboard is the MemOK button, used to recover memory settings from a failed overclock without losing the rest of the BIOS settings in the process. Below this is the EZ XMP switch, a new addition for Z97 that allows users to enable XMP at the touch of a button and without entering BIOS. Given the number of enthusiast users, especially (anecdotally) at LAN events, who have super machines but fail to run at XMP, this is a nice option to have.

The SATA ports are arranged such that the SATA Express port is nearest the 24-pin ATX, followed by four chipset SATA 6 Gbps ports and two SATA 6 Gbps from the ASMedia controller. Given what we have seen from GIGABYTE and ASRock, I am a little perplexed as to why ASUS did not invest into the tiered/stacked SATA plastic housing and routed appropriately, as this would have saved some space for (perhaps) another SATA controller or something else (a USB port?). Beside the chipset SATA 6 Gbps ports is the M.2 x2 slot, which as mentioned above shares bandwidth with the SATAe ports such that only one can be used at a time. 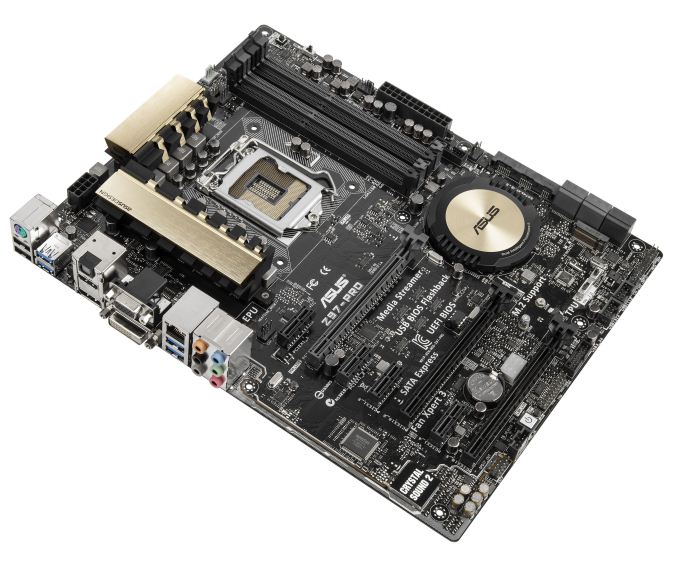 Along the bottom of the motherboard we have the T_Sensor that allows users to equip their own thermocouple and adjust the fan speeds on the motherboard based on the output of the thermocouple. Next to this is the DirectKey header that allows the user to enter the BIOS on the next boot. This feature used to be an onboard button, which I prefer, but has been relegated to jumper duty. Above these two jumpers are the TPU and EPU switches, providing automatic overclocks and power saving modes respectively. Beneath these, right at the bottom of the board, is the front panel header, one of the aforementioned fan headers and two USB headers.

Moving left across the bottom of the motherboard we have our second chipset based USB 3.0 header, a TPM module header, the BIOS Flashback button, a power button, the Thunderbolt header and the front audio header. Above the TPM header, and just above the PCIe slot in this place, is the two-digit Debug display. This position between the PCIe slots is a little different to what we usually encounter, and in this position it would be blocked by a second GPU. 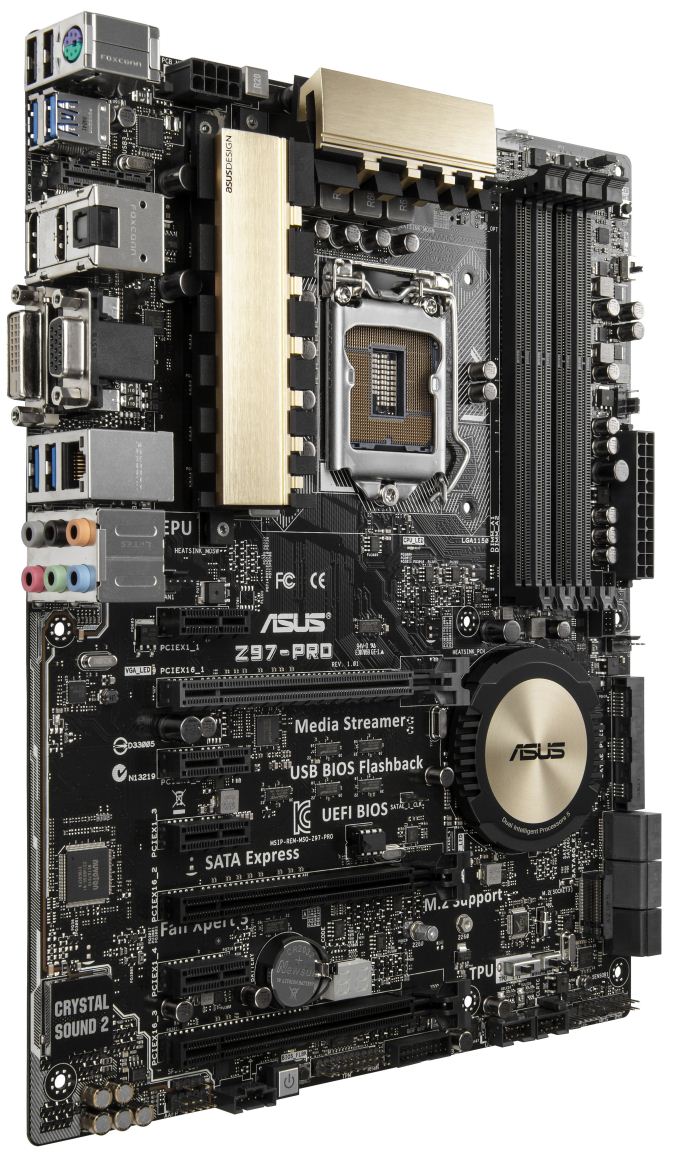 The audio on the Z97-Pro is an enhanced version of the Realtek ALC1150 audio codec featuring PCB separation, separate PCB layers for left/right signaling, an EM shield, additional filter caps, a headphone amplifier, DTS support and a de-pop circuit.

The rear IO of the motherboard gives a combination PS/2 port, two USB 2.0 ports, four USB 3.0 ports, the four standard video outputs, gigabit Ethernet (Intel I218-V) and audio jacks. Normally I prefer more than two USB 2.0 ports for installing an operating system via USB (ideally need three in case USB 3.0 are not initialized), however there was no issue here. One might argue that having all four video outputs on the rear is redundant given the targeted use of this motherboard is towards PCIe users, and some part of me is wondering if dual HDMI+DisplayPort or dual mDP + HDMI/DVI-D is more a preferred option going forward. The gap in the rear IO shown above is where the WiFi Go module should sit.