After seeing Brian’s post on the gear he brought to CES, I decided to write my own. Forewarning: his kit is far more intense than mine. After two years of carrying a pretty heavy backpack all over the show floor, I was fed up. My focus was on outright mobility for what I took with me on the go, which meant two really key substitutions: a Windows 8 tablet for a real notebook, and a compact interchangeable lens camera for a DSLR. My first CES, I carried a 14” HP EliteBook and a Nikon D5000 (18-55 kit lens). Last year was my trusty 13” MacBook Pro and my equally trusty Nikon D7000 (18-105 kit lens). Either way, it’s a total of about 8 pounds, plus the weight of the backpack and any other miscellaneous equipment I was carrying on me (notably, an iPad the first year that I didn’t even bother with last year.)

This year, I’m going with the Samsung ATIV Smart PC as my mobile computing solution - it’s a Clover Trail W8 slate with oodles of battery life, a solid keyboard/laptop dock, a Wacom digitizer, and a total weight of 3 pounds. I have my fair share of issues with this system, but it’ll last all day, give me a solid writing tool, and run Lightroom so I can publish decent posts on the go. That’s really all I need it to do - I’m often too busy during the day between meetings to really require any heavy computational power in my travel companion.

I’m also bringing my Samsung Series 7 Chronos. I have some fascination with this system - it’s a very good all-rounder type notebook, which goes a ways toward explaining why I’ve now bought two of them and will probably upgrade to the new one later this year. Decent amount of compute horsepower (IVB quad and a GT 640M), good keyboard, not too large, acceptable battery life, pleasing aesthetics, and good build quality. Two downers: the screen isn’t fantastic (1600x900 15.6” non-IPS), and the webcam/mic are beyond garbage. But it’s never failed me, even under some heavy torture while I used it as the primary workstation for my Master’s thesis and associated research. But I’m leaving it at the hotel this time around. My days of carrying 5 pound notebooks around the Las Vegas Convention Center are over. So over.

Ideally, I’d carry something along the lines of a 13” MacBook Air or Zenbook Prime, which would allow me to eliminate the second system. But I went with what I had on hand, so we’ll see how well it works. If I was driving to the show, I would have brought my 27” iMac. That would have been really awesome. But it won’t fit in my carry on baggage, so it’ll have to stay at my desk.

On a camera side, I picked up a Panasonic Lumix GF3 just before Christmas on an Amazon Lightning Deal on impulse, after a month of deliberating on whether or not to pick up a compact sidekick for my D7000. The combined weight of the D7000 body and the Tamron 17-50 f/2.8 is something on the order of 3.5 pounds. That just didn’t appeal to me from a lugging around the show floor standpoint, hence the jump into the world of Micro 4/3rds cameras. The GF3 came with a 14-42mm PZ f/3.5-5.6 pancake zoom lens out of the box, and I quickly made up my mind to replace the lens with something faster (I’ve learned my lesson as far as kit lenses, trust me). Major shoutout to my friend Tao for loaning me his 14mm f/2.5 prime lens in exchange for a bowl of pho, but I set my sights on the higher end 20mm f/1.7 prime and picked one up on Craigslist earlier today. The speed will go perfectly with the utter lack of good lighting anywhere you go at CES. I’m going to save the 14mm as a backup wide angle. The GF3 body, plus both primes, totals about a pound. Toss in a wrist strap stolen from a long discarded point and shoot, and just like that, we’re in business.

I’m bringing an iPad mini as a quick way to browse the web and preview photos on the floor. I picked up a 30 pin to Lightning adapter to go with my old iPad Camera Connection Kit, resulting in a somewhat ridiculous looking chain of adapters, but it works. It’s light, so I’m willing to make the allowance - it’s far more convenient to pull out than any of the larger 10”+ tablets.

From a connectivity standpoint, I will have my Nexus 4 on hand as my day to day device, on T-Mobile’s DC-HSPA+. I’m also carrying a T-Mobile Galaxy S3 with a second T-Mobile SIM in it as a dedicated hotspot device. I’m not on the ground in Vegas yet, but based on what Brian has told me, it sounds like T-Mobile is getting pretty hammered already, so I’m not that hopeful. I’m also bringing a FreedomPop WiFi hotspot, on the off chance that I’m the only person in attendance with a device that connects to Sprint’s old WiMAX network. It’s worth a shot? Maybe? We’ll see.

Other random gadgets I’m bringing: a 6000 mAh battery for recharging devices on the go, given to me at CES last year by the friendly people at the MyCharge booth, a couple of flash drives, a mostly-empty 1TB Seagate USB3 hard drive just in case, Razer’s Orochi bluetooth mouse for the hotel, the Samsung earbuds from the Galaxy S3 box, and a Battlefield 3-edition Razer Blackshark headset for the flights. Also, a 6 port power strip from IKEA, and a bunch of cords, cables, and power bricks. 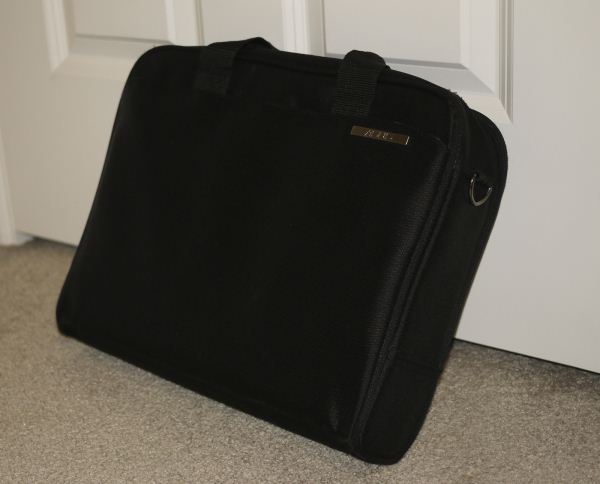 With the noticeable slimming down of my gadget profile, I also decided to downsize the carrying case. I’ve got a fantastic High Sierra Elite series backpack (fits up to 17” notebooks) that I’m bringing everything in, including my showfloor bag. It’s an ASUS-branded Targus notebook briefcase from my much loved ASUS W7S (this is from back in mid-2007, when ASUS used to make exclusively high end computers and included accessories like cases and bluetooth mice with each one). It’s small enough that it fits inside my High Sierra backpack, and comes with a shoulder strap that isn’t pictured here. It’s tiny, it looks relatively professional, and has enough space for what I want to bring to the show floor. My concerns are two-fold: one shoulder strap versus splitting my load across two in a backpack - will it get tiring? Also, if I decide to bail on the Clover Trail experiement mid-conference, I also need to switch to the High Sierra backpack, because the Series 7 won’t fit into the briefcase.

Estimated total weight for my entire gear bag: just over 6 pounds, which is less than just my DSLR+notebook setups from years past. I am so excited. But also a little bit terrified. Because when your most powerful on-hand computing device is running Atom and your camera looks like a glorified point and shoot, you don’t really have that much room for error. Anand said in reaction to my gear, “You are a brave man.” The line between bravery and foolishness is a thin one. Time to start praying.