We've been discussing AMD's Enduro 5.5 update for a few months now; when last we checked in, everything was almost in place...everything except fully optimized DX9 support. A little over a week ago, AMD posted one final (maybe?) beta release for Enduro laptops, and since we still have the AVADirect P170EM available we quickly ran it through our benchmarks one last time. Not a whole lot has changed, and some of the games even show minor drops—basically margin of error stuff—but let's just run the numbers.

Note: The Enduro 9.01 Beta is similar but not entirely the same as the Desktop/Mobile 12.11 Beta8 driver. We only tested a couple titles with the latter and saw lower performance, so we recommend the Enduro driver for Enduro enabled laptop users—which makes sense, given the driver name. I've referred to the Enduro 9.01 Beta below as 12.11 Beta8, as I believe they're the same core driver but with some extra Enduro tweaks present. 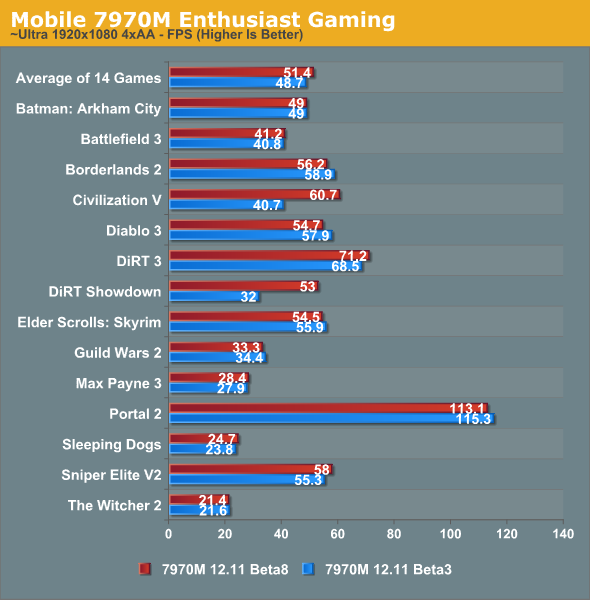 For many of the games, we see only minor differences; in fact, of the fourteen tested games, only two show more than a 5% difference, but those two show major improvements. Civilization V finally fixes the inexcusably poor performance from the 7970M and boosts frame rates by 50% while DiRT: Showdown also gets a major kick in the pants and is up 65% compared to the previous Enduro beta.

Overall, those two results are enough to give an average performance increase of 5%, but really it's the difference between borderline playable and smooth performance in those specific games. The only game where we're still down a ways from the best result we've seen on 7970M is Portal 2; the DX9 Hotfix we tested still manages about 10% better performance than we're seeing with the 12.11 Beta8 Enduro driver

Looking at the big picture, the 7970M still can't max out details on every single title you're likely to play—Sleeping Dogs and The Witcher 2 in particular are brutal, with Battlefield 3 and Guild Wars 2 also hovering closer to 30FPS than we'd like. Still, you're not going to get much faster should you opt for the NVIDIA GTX 680M at this point. Here's the latest breakdown of how the two top mobile GPUs compare: 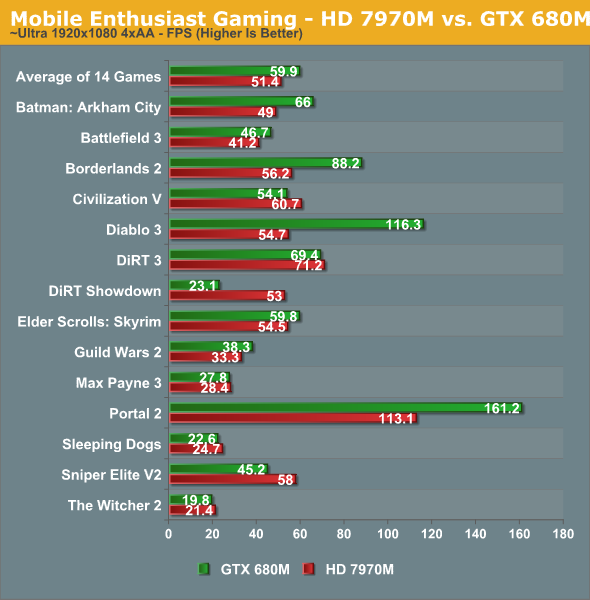 NVIDIA still holds punishingly large leads in Batman: Arkham City, Borderlands 2, Diablo 3, and Portal 2 (35%, 57%, 113%, and 43% faster, respectively), which is what keeps the GTX in the overall lead by 17%. AMD on the other hand comes away with sizeable wins in DiRT: Showdown and Sniper Elite V2. The remaining games are all close to the 10% or less range, and if we discount the big wins we just listed, the eight other titles are basically a wash—NVIDIA wins by 1%. But that's painting perhaps too rosy a picture for AMD, considering the four vs. two major victories.

The fact is, NVIDIA is still ahead on the drivers and support side of the equation. The latest Enduro driver certainly closes the gap, but NVIDIA has been better about getting updated mobile drivers out with support for new releases for two years now. I suspect if I were to go out and test Black Ops 2 and Assassin's Creed 3, I'd be more likely to see additional large NVIDIA wins—especially since those titles carry NVIDIA branding. On the other hand, Hitman Absolution, Far Cry 3, and Medal of Honor: Warfighter are all AMD branded games that have released recently (or in the case of FC3, it releases in the next week), so they ought to have a lead in those games. If I get a chance, I'll try to confirm performance on those titles, since all are likely to be popular.

We're still back to the same old refrain: where AMD really needs to work is on their drivers and updates. The 7970M is their halo mobile GPU, so it's getting good support (now). In fact, most of the 7000M products are receiving decent support, but earlier Enduro/Dynamic Switchable Graphics laptops are still a bit finicky about getting drivers installed. My overall feeling is that NVIDIA has also had more high profile games in the past couple years; AMD looks like they have a good list of titles for this holiday season, and hopefully they can continue that.

Personally, I loved Deus Ex: Human Revolution, and the DiRT series has been pretty popular as well. Sleeping Dogs looks pretty cool, but I haven't had a chance to play it much so I can't really comment there. Sniper Elite V2 on the other hand has not received particularly high marks, and neither has Nexuiz. NVIDIA also has a lot of multi-platform (re: console) games on their list, but those are still some of the better sellers. Basically, NVIDIA historically ends up with co-branding on more major releases than AMD, and with the latest talks about AMD sell offs and buy outs circulating, it's a scary time for computer enthusiasts looking at AMD—though their GPU division is definitely a brighter spot on the list.

It's taken roughly a year for Enduro to reach where we wanted it to start, and anyone who bought in early is probably more than a little irked. I'm still looking for improved support of HD 6000M/"5000M" laptops with Dynamic Switchable Graphics, but in another year even that won't really matter as it will be time for an upgrade. If you've already got an AMD-equipped laptop, the latest drivers are definitely worth a download. If you're on the fence, we're to the point where waiting for the next mobile GPUs (e.g. "8000M" and "700M") might be the way to go.