In and Around the Cougar Challenger

I was actually surprised by the aesthetic of the Cougar Challenger. More ostentatious designs like this one tend to be more the province of Taiwanese companies like NZXT while European engineering tends to look more like Fractal Design's hardware. In my experience, Western consumers tend towards simpler designs that are functional, attractive in that "black goes with everything" kind of way, but still have a hint of style. Plastic is seldom well-received. Cougar actually offers the Challenger with accents in three colors: white, black, and orange. When they asked me which one I'd like to review, I felt like the white would go over best, but surprisingly they told me that the white one wasn't being marketed in the United States, and they felt the orange would go over better. I respectfully disagreed and if my hunch is correct, most of you do too.

Cougar is going for a jet-fighter kind of motif with the Challenger, with hard angles and honeycomb-patterned intakes on the front. That motif culminates with the flip-up cover over the power and reset switches at the top of the case, not too far off from Corsair's Vengeance C70. I've been mostly trying to stay neutral when judging the aesthetics of the cases I review, because I'm not necessarily an arbiter of taste and I have known people who prefer flashier designs like this one, but the Challenger's awkward angles and the way the fascia juts out in almost every direction just feels too busy. Flashier designs like NZXT's Phantom 820, those I can understand, but the Challenger seems like too much. 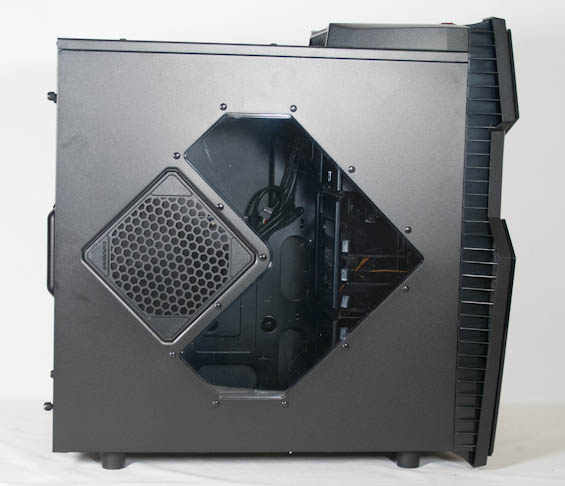 The side panel comes with the 120mm/140mm fan mount completely open; Cougar includes a magnetic snap-on filter that covers it up and seems to get the job done, but it's a clunky solution to a problem most other case manufacturers have already solved. That mount winds up being slightly more than a quarter of the diamond-shaped side window, but the rightmost corner of that window overlaps the drive cages while leaving the CPU area mostly covered up. When I was a windowed case kind of guy, I would've wanted to see the beefy cooler on the CPU. 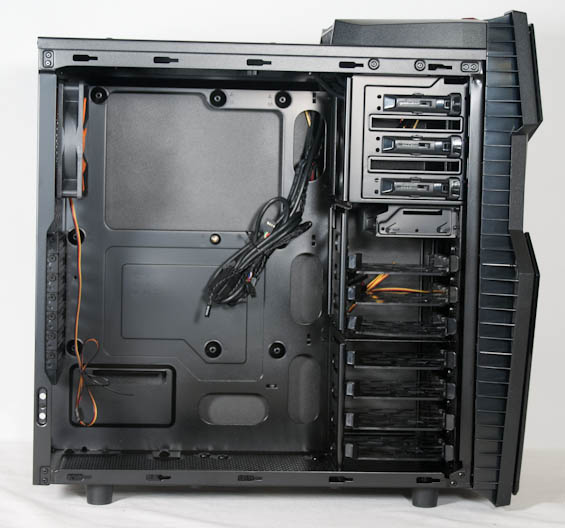 Perplexing design decisions unfortunately continue when you remove the side panels. They're secured with thumbscrews, but are the types of panels that require lining up multiple small extrusions into grooves to slide onto place, making them frustrating to remove and replace. Interestingly, when you get inside the Cougar, the whole design becomes remarkably staid. You've seen this before: toolless optical drive bays, two drive cages (the top of which is removable), motherboard tray with holes for routing cables. Where Cougar gets it really right, though, is by including a peg in the center mounting hole for the motherboard tray, making installation much easier. The typical mounting points are also extruded and built into the tray itself, so no standoffs are required for basic ATX boards.

Where things get wonky again is with the removable center drive cage. The two screws used to secure it face towards the back of the case, making them incredibly awkward to get to. They're not thumbscrews either, just garden variety screws. I'm not sure why this was designed the way it was, but if you're going to remove the cage you'd better do it before the motherboard goes in, otherwise the innermost screw is going to be basically impossible to remove.

Reviewing the Challenger visually is tough because I don't want to rag on them, but the problem is that their internal design is extremely conservative while the exterior design is gaudy almost to a fault. There are good touches here and there, but while working on it I often found myself feeling like I'd seen everything here before. If you're just hawking cases by the truckload to boutiques like NZXT does, that's not necessarily an issue, but if you're a smaller company trying to get your foot in the door in the States, a design that doesn't actually stand out much from the garden variety gaming enclosures can be fatal.