Razer took a system that was already near the brink of its thermal envelope, tossed about 50% more compute power into it, added 12 watts to the power draw, and tried to still keep it within reasonable operating temperatures. So now we get to see if Razer’s engineering team managed to pull it off.

A quick refresher from last time: the Blade was hot. Damn hot. We saw internal temperatures of 95C on the CPU and 80C on the GPU under loaded conditions, numbers that we were simply not that comfortable with. But it wasn’t just at load; this was a system that got relatively toasty even at idle, where we saw temperatures in the 50-60C range. This resulted in a system that ran hot to the touch (though most of this heat was directed away from areas that are commonly touched like the keyboard and palmrests) and constantly had the fan running, even when bouncing around the internet or YouTube. Put simply: not great. 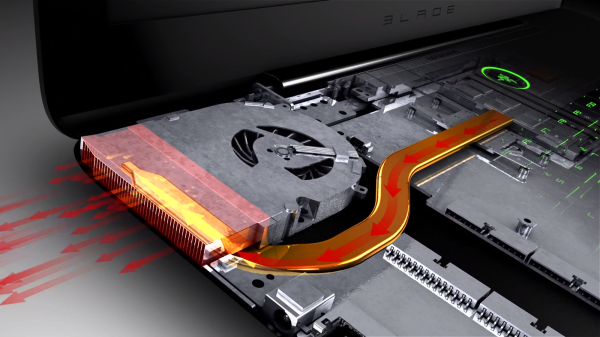 Thankfully, the redesigned cooling system has helped tremendously, particularly at low load. The system now idles in the 37-42C range, significantly lower than the 55ish it used to go for, and it’s very rare to see the fans spool up until you start gaming. I put it through my typical 100% system load, basically using Furmark 1080p and wPrime 1024M looping to peg both CPU and GPU load at 100% for a sustained period of time to see where temperatures settled. wPrime is multithreaded so with 8 threads it's loading all four cores equally. I saw CPU temperature settle in the 85C range, while GPU temperature maxed out at 90C. It’s still pretty hot, but even at a sustained hour-long clip, I never saw throttling—the GPU core was pegged at 950MHz—and the fan itself was much less intrusive than before.

To put this to the test in a real-world gaming situation, I fired up our DiRT 3 benchmark (it’s built into the game) and ran it fifty times in a row. I tested at our Enthusiast setting, which is 1080p, Ultra High quality, and 4xMSAA, and each run, including cut-scenes, totalled about 2 minutes and 20 seconds, give or take ten seconds—it’s not the exact same clip each time, as AI is typically different, which impacts the race results and elapsed times. That’s essentially two hours of gaming, with a fairly new game running at maximum settings. My performance over time graph ended up being as flat as Wyoming—almost no deviation in performance, beyond random test-to-test variation. I ran a similar test on the MacBook Pro (except with Anand’s OS X Half-Life 2 benchmark) and by run 30, the downward trend was pretty clear. I ran that 40 times, but I went even longer here to see if I could establish any kind of pattern. All I got was a really consistent 30.75fps, give or take one. I was impressed, to say the least. 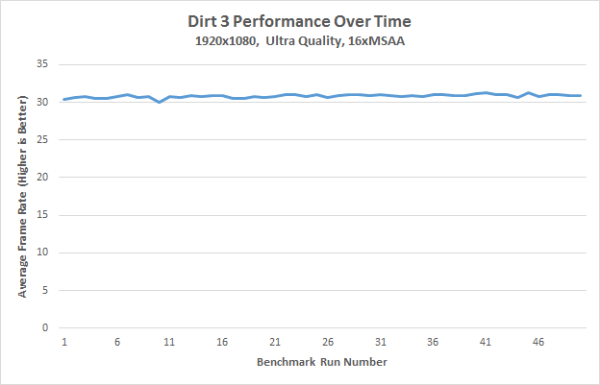 A quick note—I was unequipped to test fan noise, but I can say that even under full load, the new fans are much quieter than the old fans were even under part loading. The new fans seem to be running at a lower RPM as well, which was no doubt helped by the larger venting; it’s a really big improvement from before.

+ Submit News
As HPC Chip Sizes Grow, So Does the Need For 1kW+ Chip Cooling