A month ago Qualcomm invited us to play with their latest mobile development platform, the APQ8064 based MDP/T. For those of you who have trouble following Qualcomm's naming scheme, the APQ prefix implies an SoC without integrated baseband. The 8064 corresponds to a 28nm, quad-core, Krait v2 based SoC. All of the cores can independently clock as high as 1.5GHz. Running alongside the four Krait cores is Qualcomm's Adreno 320 GPU, the first member of its next-generation graphics architecture. We went into a bit of detail on the 320 here, but architectural details on the 320 as well as clock speeds are scarce at this point.

This wasn't the first Qualcomm MDP we played with, but it was the first one we benchmarked in the form of a tablet. These platforms are built as test vehicles for Qualcomm silicon, usually acting as a showcase for what the hardware can do. Just as important however is using these MDPs to build, test and optimize Android for Qualcomm's silicon. Although we had to leave the MDP/T in San Diego, our own test unit from Bsquare just showed up, giving us the opportunity to look at Adreno 320 performance in GLBenchmark 2.5.

As a recap, the APQ8064 MDP/T features a 1366 x 768 screen, 2GB of LPDDR2-1066 (2x32-bit channels) and runs Android 4.0.4. GLBenchmark 2.5 is the latest Kishonti GPU test for Android and iOS. We went through and outlined the changes to GLBenchmark 2.5 in our launch article. Note that not all GLBenchmark 2.5 tests completed on our MDP/T, what you see below is all we could get to complete. As this is a development platform, things are sometimes rough around the edges. Finally, as always, we are looking at performance of a development platform. A lot can happen in the transition to final, shipping hardware, that can change performance. Qualcomm's most recent MDPs ended up performing pretty close to OEM hardware, but anything is possible (particularly as the OEM has final say in the software configuration of their devices). 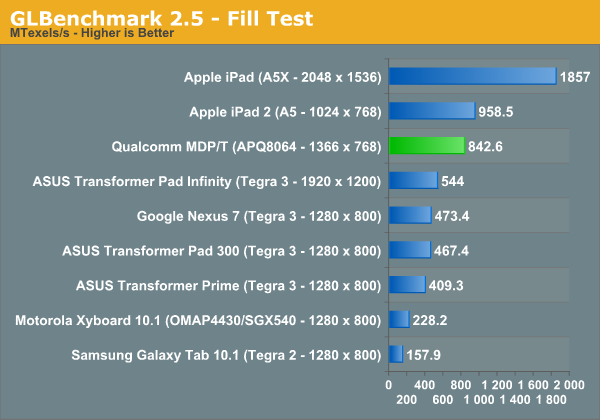 Without details on the GPU clock it's tough to conclude a lot about the fill rate test results, but Adreno 320 does very well. Hot on the heels of the PowerVR SGX 543MP2, the 320 is a significant improvement over the current crop of GPUs running Android. 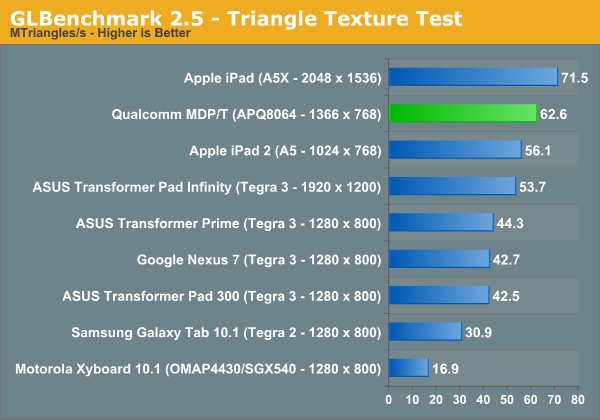 GLBenchmark's simplest triangle test puts the Adreno 320 in between the performance of the 2nd and 3rd gen iPads. 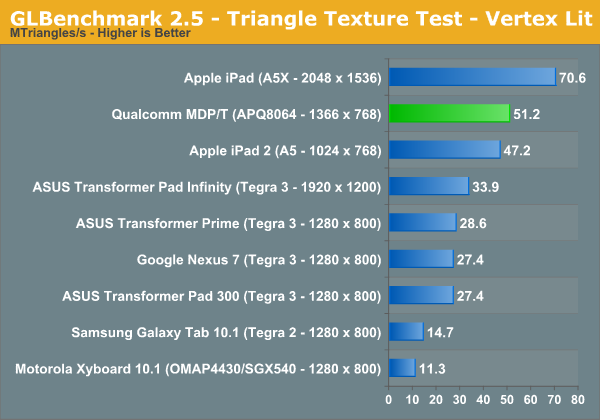 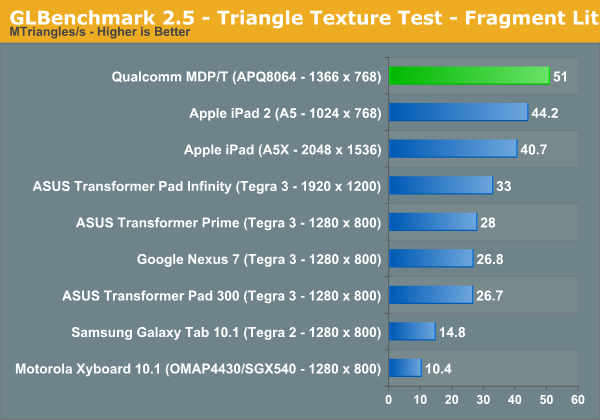 Here's where the 3rd gen iPad's resolution penalizes it, the 2nd gen iPad pulls ahead and the MDP/T ends up faster than both. It's unfortunate the offscreen tests wouldn't complete properly. 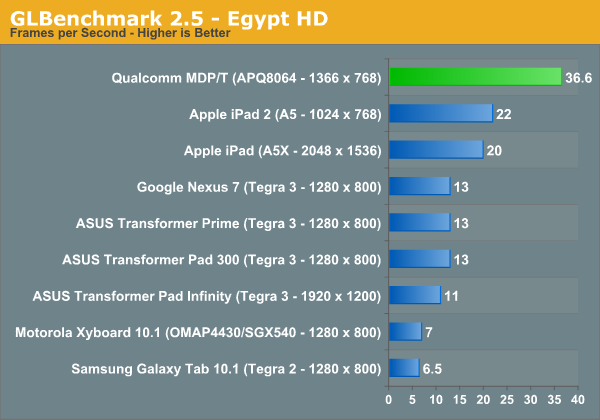 At its native resolution in the new Egypt HD gameplay simulation test, the Adreno 320 based MDP/T does incredibly well. Part of the explanation is the Adreno 320 seems a bit overpowered for the MDP/T's 1366 x 768 display. When we normalize display resolution to 1080p the MDP/T is still in the lead, but the margin of victory seems more believable: 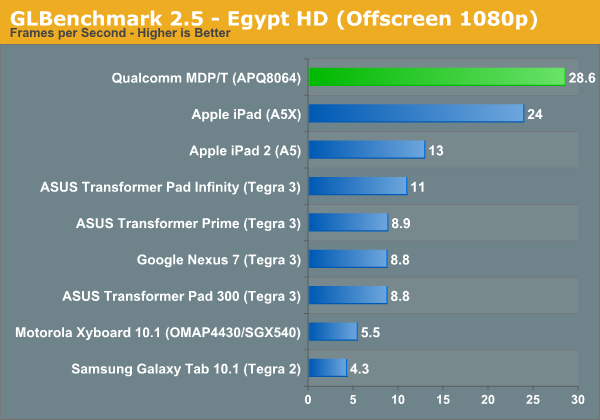 This is great performance from the MDP/T. When we first looked at GLBenchmark 2.5 we were worried that it'd be another generation before we got reasonable frame rates out of mobile hardware, but if the MDP/T is any indication that time may be sooner rather than later. 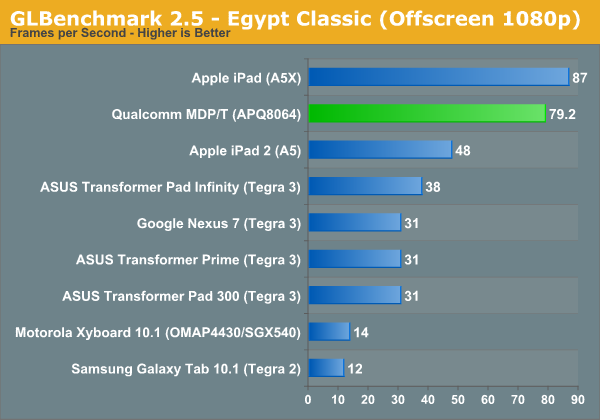 The only Egypt classic test that would complete is the offscreen 1080p benchmark, which is perfect as it gives us data normalized to a single resolution. Here the A5X pulls ahead by around 10% but once again the MDP/T does extremely well. If Qualcomm's device partners can match the MDP/T with shipping hardware, the next generation of Android tablets should have pretty good GPU performance.