We've been covering the combo chip space for a while now, which is hugely important for both smartphones, tablets, and other form factors usually driven by ARM SoCs. Combo chips traditionally deliver WLAN, Bluetooth, and FM connectivity, and recently a few more air interfaces have joined the fray. The main players in the smartphone combo chip market have been Broadcom with their BCM4325, BCM4329, and BCM4330 parts, TI with their WiLink series, and newcomer Qualcomm Atheros. 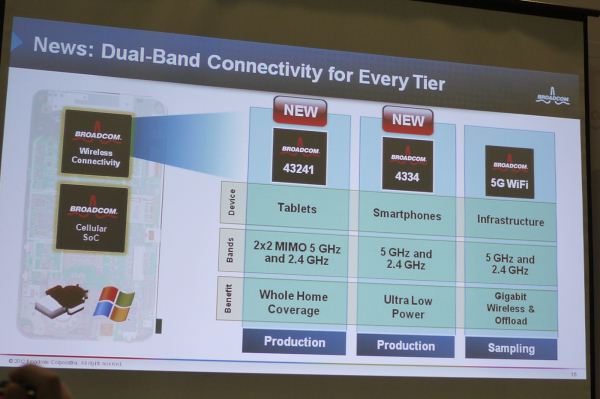 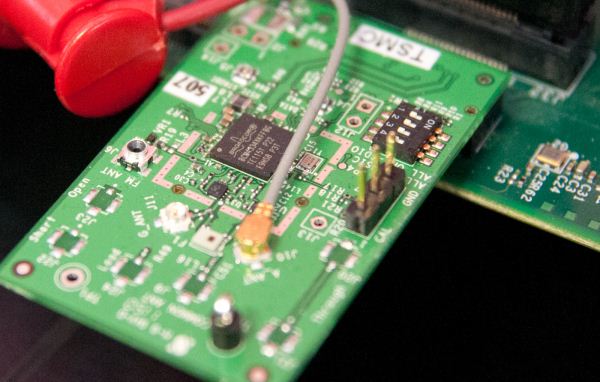 BCM4334 in a plastic package

First is BCM4334 which is the follow-up part to BCM4330 that we've seen in a bunch of devices. BCM4334 changes from a 65nm process to 40nm LP, which itself offers a power profile reduction. The change isn't a simple die shrink either, Broadcom says it has worked on and refined the existing BCM4330 design and reduced power a further 40-50% and dramatically reduced standby power by 3 orders of magnitude. I asked Broadcom to give me a realistic estimate of power consumption - BCM4330 in full Rx mode consumes around 68mA, BCM4334 consumes 36mA at the same voltage, just to give an example of the reduction. Air interfaces don't change between BCM4330 and BCM4334. The second part, BCM43241, is a 2x2MIMO combo chip that's geared at tablets and also is built on a 40nm process.

Broadcom also showed off its 802.11ac solution again, including a 3x3:3 demo with wired links, and a system running one spatial stream over the air. The single spatial stream demo over the air was showing a transfer link rate of 350 Mbps in IxChariot, the closest I've seen to the theoretical 433 Mbps maximum for a single stream and 80 MHz channel. The three spatial stream demo was showing a repeating transfer of 1.04 Gbps. Interestingly enough, Broadcom whipped out a notebook running a WiSpy DBx and showed Chanalyzer 4 showing 802.11ac's 80 MHz OFDM window.