Our first test writes 4KB in a completely random pattern over an 8GB space of the drive to simulate the sort of random access that you'd see on an OS drive (even this is more stressful than a normal desktop user would see). As I've explained in the comments in previous reviews, simulating the type of random access you see in a desktop workload is difficult to do. Small file desktop accesses aren't usually sequential but they're not fully random either. By limiting the LBA space to 8GB we somewhat simulate a constrained random access pattern, but again it's still more random than what you'd see on your machine. Your best bet for real world performance is to look at our Storage Bench charts near the end of the review as they accurately record and play back traces of real world workloads.

For our random access tests I perform three concurrent IOs and run the test for 3 minutes. The results reported are in average MB/s over the entire time. We use both standard pseudo randomly generated data (data is random within a write, but duplicated between writes) for each write as well as fully random data (data is random within a write and random across most writes) to show you both the maximum and minimum performance offered by SandForce based drives in these tests. The average performance of SF drives will likely be somewhere in between the two values for each drive you see in the graphs. For an understanding of why the type of data you write to SF drives matters, read our original SandForce article. 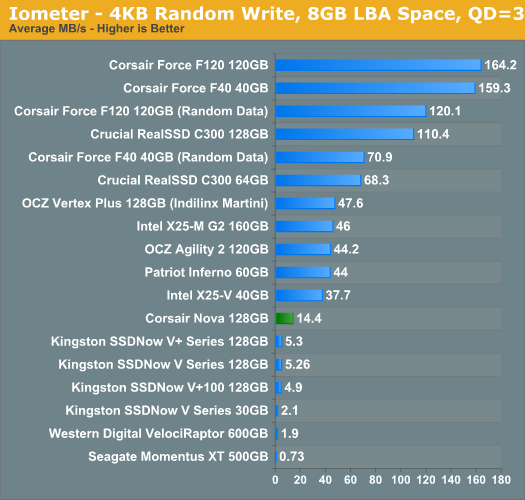 The Corsair Nova is our Indilinx Barefoot representative in this preview and you can see how performance has improved with the Martini controller. While the original Indilinx Barefoot traded good sequential performance for slower-than-Intel random performance, Martini fixes the problem. It's not in the class of SandForce's SF-1200, but Indilinx appears to have built a performance equal to Intel's X25-M G2.

Many of you have asked for random write performance at higher queue depths. What I have below is our 4KB random write test performed at a queue depth of 32 instead of 3. While the vast majority of desktop usage models experience queue depths of 0 - 5, higher depths are possible in heavy I/O (and multi-user) workloads: 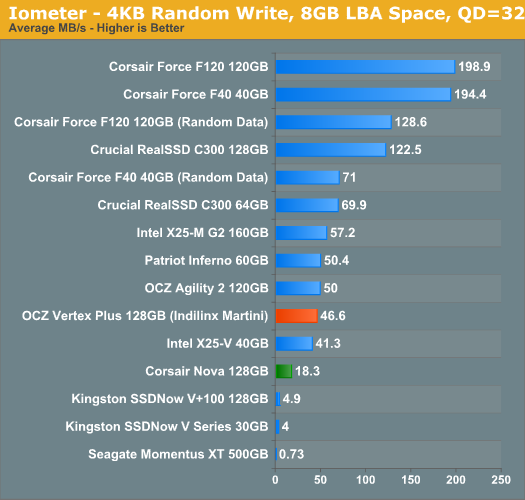 Our random read test is similar to the random write test however we lift the 8GB LBA space restriction: 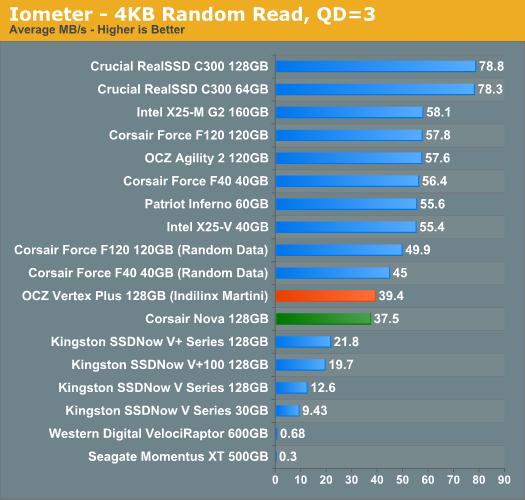 Random read performance falls short of Intel and basically hasn't changed since the Barefoot. It's not bad at all, but not industry leading.