In our first storage test, we utilize a 3.82GB test folder and transfer it from our WD VelociRaptor drive to the competing hard drives. 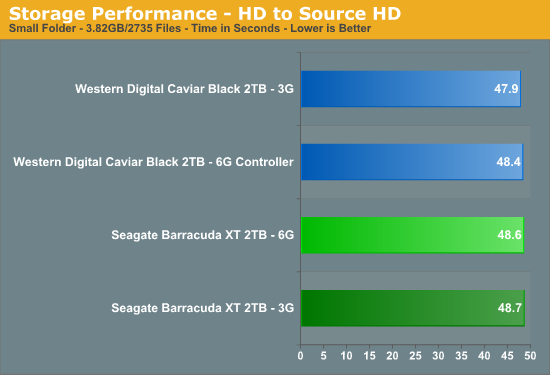 There is only a 2% difference in performance between the two drives on the Intel P55 controller and basically a tie on the Marvell controller. We did not expect anything really different as the average sustained transfer rates between all three drives are very close.

In our second storage test, we utilize the same 3.82GB test folder and transfer it from our test hard drives to the Intel 160GB SSD. 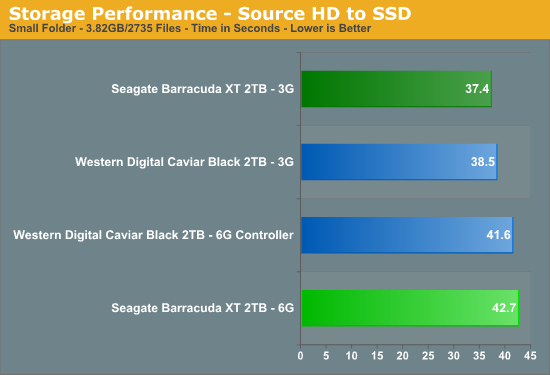 In our final small folder test, we utilize the 3.82GB test folder and transfer it from our test SSD back to the competing hard drives. 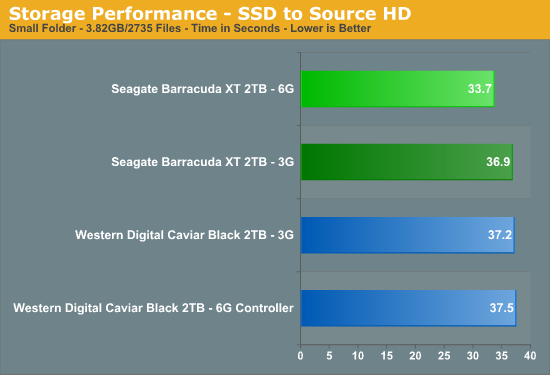 In our first storage test, we utilize a 15.2GB test folder and transfer it from our WD VelociRaptor drive to the competing hard drives. 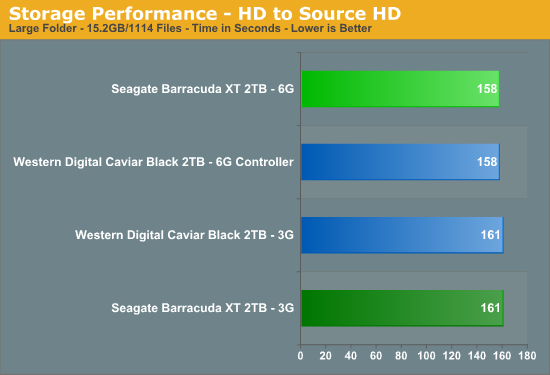 Our two drives perform identically on like controllers, the only difference here is that the Marvell controller is leading Intel in part to the aggressive 1027 driver algorithms that utilize additional system memory for transfer caching.

In our second storage test, we utilize the same 15.2GB test folder and transfer it from our test hard drives to the Intel 160GB SSD. 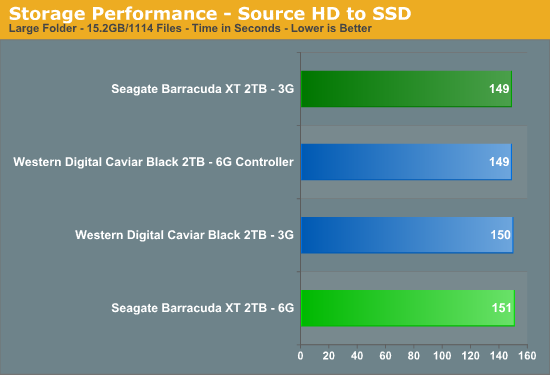 Interestingly enough, the WD drive is faster on the Marvell controller than the Intel. However, the Seagate drive benefits from the Intel controller.

In our final large folder transfer test, we utilize the 15.2GB folder and transfer it from our test SSD back to the competing hard drives. 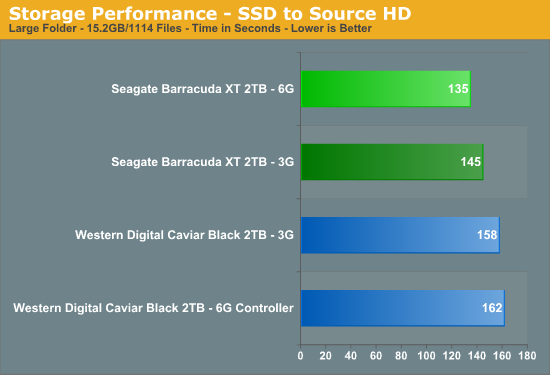 Like our small folder test, we see the benefits of the Marvell Controller in SATA 6Gb/s mode as the Seagate drive is 7% faster than it is in SATA 3Gb/s operation. The WD drive is up to 17% slower in this particular test.

We are showing the total score for the PCMark Vantage disk benchmark as a reference point between the two controllers and drives. 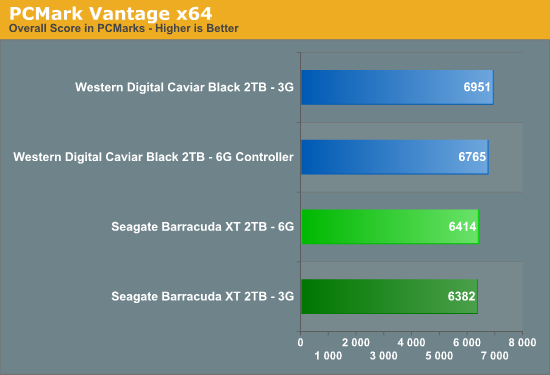 That was a letdown in several ways. We never really expected that much out of SATA 6Gb/s technology as our two hard drive samples are just now pushing the boundaries of SATA 1.5Gb/s. Only when we utilized a fast SSD as the source drive to copy files to the Seagate Barracuda XT did we see an advantage in the burst rates available on it and the Marvell 9123 chipset. Even then, the advantage was fleeting as the sustained transfer rates equalized quickly between the two controllers. This test is just the opposite of what a typical user would perform anyway as most would utilize the hard drive for storage purposes and not the SSD.

Even more disturbing was the performance disparity between the Seagate Barracuda XT 2TB and the Western Digital Caviar Black 2TB drive in our limited benchmark test suite. We expected more from the Seagate drive based on its specifications, not the 6Gb/s abilities but platter design and cache setups. Hopefully Seagate can improve performance with firmware changes, if not; the battle is already lost regardless of controller technology.

We just do not see SATA 6Gb/s technology offering any real benefits for spindle-based hard drives on the desktop at this time. Rotational speeds are being kept in check at 7,200rpm with all the performance improvements coming from increased areal densities and cache. We expect SATA 6Gb/s to really come into its own with solid state drives. This will not occur quickly but we expect to see recognizable benefits with controller designs about two generations ahead of where we are currently. By that time, both AMD and Intel will have native 6Gb/s capabilities on their controller hubs.

In the meantime, we see the current implementations of 6Gb/s technology on motherboards as being a marketing checklist feature for the most part. However, since the Marvell 9123 chipset can fall back to SATA 3Gb/s or 1.5Gb/s operational mode it does offer additional SATA ports on the motherboard with performance that is fine for secondary storage devices.