We receive a lot of interesting products in the labs for review over the course of a year.  We do not always review all of these products, although we will at least make mention of them in our blogs or forums from this point forward. In the meantime, there are those products that sometimes deserve more than a mention for a variety of reasons.  Today we have one of those products and it comes from Vigor Gaming.

Vigor Gaming is best known for custom gaming systems that provide a high degree of customer satisfaction along with a fairly reasonable price to performance ratio depending on the configuration layout.  What most users might not know is that Vigor Gaming offers several component choices for separate purchase.  Of these, the iSURF II Hard Drive Cooling System caught our attention when it arrived.

Not so much for the fact that it is a hard drive cooler, more so for the fact that it had a certain industrial art edge to it and it felt like a very solid piece of hardware.  While the design was the most interesting aspect of the product, we wondered out loud if it really worked.  As it turns out, it does work as we will see shortly.

In the meantime, let's take a quick look at the product design. 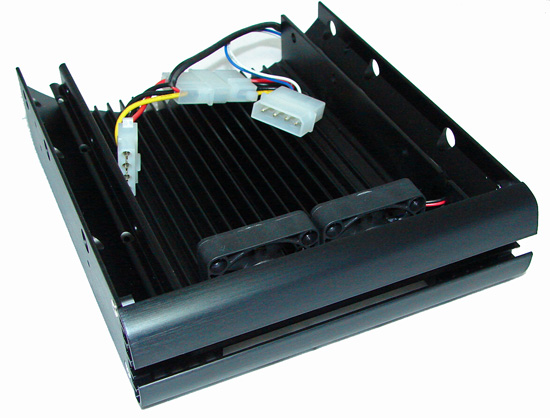 Actually this is bottom side of the iSURF II where the drive resides and is installed.  The unit contains two 40mm fans rated at 20.7 dB(A), a blue LED, and separate power connectors for both, which is a nice touch as the LED tends to light up the room.  In fact, between the face plate design and strength of the LED, our case resembled a Cylon in a dark room.  The good news is that you can disable the power to the LED or move it vertically to block the output level.

Our noise measurements (room at 20dB(A)) revealed a measurement of 23.2 dB(A) in our test case enclosure.  In other words, several other components in your system will probably generate more noise. Also, the fans can be reversed to blow hot air out the front of the unit instead of drawing cool air into it.  In our test scenario we did not measure a difference in temperatures although your mileage might vary.

Ah yes, the iSURF II with our test drive installed. Speaking of the side rails, it took a bit of effort to get the drive lined up properly so each of the rails made complete contact with the Raptor X.  There is a fair amount of clearance on each side of the drive once installed.  If you crank down the screws on one side without balancing the other side, there will be a 0.115" gap.  This effectively increased our thermal results by 1C in testing.  We ended up placing the drive in the cage, installed all six screws so the drive was centered between the rails, and then torqued the screws down in a criss-cross pattern until the drive was securely attached with both rails making full contact.

A view of the unit's topside reveals the curved design and additional cooling fins. The unit itself comes in any color as long as it's black, is designed completely of heavy gauge aluminum, measures 172 x 142 x 41.5 mm, and weight a hefty 586g.  Current MSRP is $24.99 and we have seen street prices around $22.

Enough of the aesthetics, let's see how the iSURF II performs.