I mentioned that GTA4 failed to revolutionize the series, but instead was another evolutionary step in the franchise; that’s not a bad thing. If you loved previous GTAs then new additions like being thrown through the windshield of your car during a particularly violent accident are nice touches (ok, that sounds a little sociopathic).

The physics in GTA4 are quite possibly the biggest change from earlier games, they are far more realistic - in some cases this is a good thing, in others its a bit annoying. People react more realistically when you hit them with cars or shoot them in the legs, but it also takes longer for you to do things like run up a flight of stairs (also contributing to the game’s slow-control).

Niko, our loving GTA4 protagonist, now has a cell phone that he can use to communicate with other characters in the game. It’s a nice touch, but it’d be even nicer if he had an Internet-enabled smartphone so you wouldn’t have to drive to the nearest Internet cafe to check your email. I guess in GTA5 the main character will rock an iPhone.

You also get use of a GPS, which can give you turn by turn instructions on how to get to your destination. Unfortunately, if the route isn’t plotted automatically by the mission, it’s a bit of a pain to get it started; you have to pause the game, go to the map menu and click on your destination. You’d lose part of the realism but it’d be nice to be able to plot your route directly from the cellphone, since that’s how you receive a lot of instructions on where to head next.

The loading screens are definitely annoying in GTA4, although no where near as frustrating as San Andreas. I’m told that the Playstation 3 version gets around this problem by installing the game to the hard drive, but with everyone I know purchasing the Xbox 360 version I had no choice. Thankfully the loading screen is pretty much limited to before and after cutscenes in the single-player game, its presence in the multiplayer modes is far more frustrating the more I think about it. Actual gameplay is never interrupted by loading in single-player but it’s annoying nonetheless; it contributes to the overall slow/sluggish feeling I get from GTA’s gameplay. 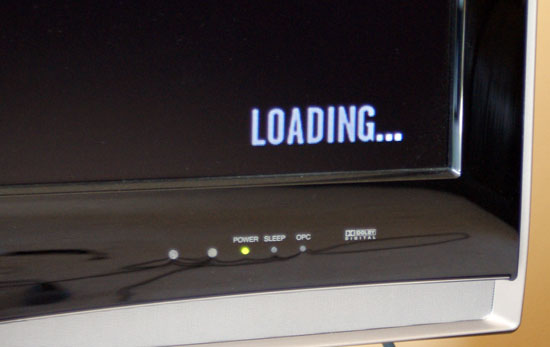 Grand Theft Auto 4 is one of those games where you can, over time, adjust to its pace and controls. The problem is that switching between it and any one of the many faster paced games on the market will throw you off.

I used to love the multiplayer in the old top-down GTAs and admittedly haven't clocked enough hours in the GTA4 multiplayer modes to provide a full analysis but what I will say is this:

1) My complaints about controls are amplified when you get to multiplayer. The games are much more fast paced and thus sluggish controls are even more frustrating.

2) The load times between respawns are frustrating. While the actual loading itself may not be any longer than a respawn in Halo 3, you're left looking at a black screen with the word "Loading" in the corner - making it feel much longer.

3) There's a party system, yay. The party system isn't a carbon copy of what Bungie did for Halo 2/3, boo. At some point I'm hoping Xbox 360 game developers will start taking Halo's party/matchmaking system seriously, because it makes a huge difference when playing with friends. I liked Gears of War, but the lack of a Halo-esque party/matchmaking system meant that once Halo 3 came out, my friends and I dropped it entirely.

The multiplayer itself can be a lot of fun, especially with friends. Even though the various multiplayer modes are very objective oriented, you can still wreak havoc in Liberty City just as well - the difference being that you can do it with friends. That being said, I'm not sure how long the multiplayer will be enjoyable, but for now it's entertaining.

The Ugly is in the Controls Controversy: I Has It
Tweet
PRINT THIS ARTICLE
Comments Locked