A Lesson in User Failure: Investigating the Serial ATA Connector

In our case we were fortunate. The data pins on the SATA connector were fine, we simply didn’t have wafer to hold a cable on top of the pins. We ultimately managed to find the piece of the plastic wafer that broke off, and with a bit of tape MacGuyvered a solution with another, particularly tight SATA cable that allowed us to get the drive back in to working order. But this is luck on our part, just finding the wafer, let alone is breaking in a manner that allowed us to enact this fix is not common for other computer owners we’ve talked to with this problem.

But as we mentioned in the opening of this article, what happened to us was completely preventable. We’ll freely admit that what happened was due to negligence, and could have been avoided with a little more careful consideration. How?

By far, the easiest solution would have been to use the right cable. A latching cable would have prevented some of the downward deflection that caused the connector to break. A better solution however is to have used an angled SATA cable, in which one connector is at a 90 degree angle. Using a right-angled cable would have made our SATA flow along the width of the case rather than the depth of it, allowing us to avoid routing a cable towards the fan, and avoiding the need to bend it so sharply that it exerted any significant force on the drive’s data connector. 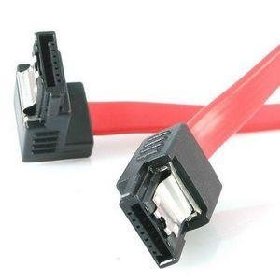 Unfortunately angled connectors are not a common part. Because they’re not practical to use in every situation (mainly those where the cable needs to be going the other way) we do not see drive manufacturers or motherboard manufacturers include angled cables with their products, instead they ship with traditional straight cables that are acceptable in most situations. This situation requires a builder to have the foresight to purchase an angled cable separately (a quick search on Newegg found one such cable for $2) which was what we were initially lacking.

Another option for our case would have been to go with one of a small number of reinforced SATA cable devices. The most notable of these would be the now-discontinued SecureConnect cable, which is functionally a cable with a far larger connector on the drive end that secures itself against the drive. Unfortunately Western Digital went with a proprietary route here in order that the enlarged connector would have something better to hook on to by putting extra pits on their hard drives, which means the cable can’t be used on non-WD hard drives like ours. There are a few smaller parts manufacturers that make similar devices that will work with any drive, but these wouldn’t be quite as secure; we do not have any on hand to test but we believe any such device would have still prevented the drive’s connector from breaking (and yes, we’re aware of the irony of such a device further closing the already small space between the drive and the fan). 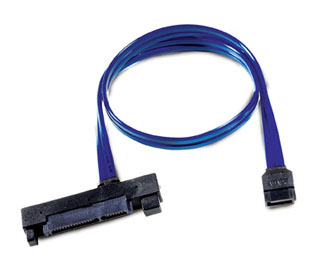 No matter how we decided to go about reinforcing our setup however, the point stands that in hindsight we should have done something as we had a situation that was likely to (and did) result in a connector breaking. We were fortunate that it broke in a manner that wasn’t a fatal problem (and that we found the bit of plastic wafer that broke off), but this can be a fatal error.

The moral of the story, and the reason we even bothered to publish this article is to share with you the reader an analysis of what happened, to pass on what we learned so that it doesn’t happen to you. The vast majority of computer builders will never even find themselves in a situation where they can break a connector, and even then only a fraction of those builders will actually break something, but it does happen. And out of any hardware that can be broken, most of us would rather lose anything else before a hard drive, due to the desire not to lose the data stored on it.

Our lesson then is this: don’t hesitate to use additional hardware to hook up a SATA drive if you’re in tight spaces. An angled cable is only a couple of dollars (and will likely outlast any other system component) can prevent turning a hard drive worth a hundred times that value from turning in to an oversized paperweight. The SATA connector is by no means fragile, but it’s not abuse-resistant, it requires a little more care than most of us are accustomed to when it comes to hooking up hard drives.

As is often the case, the effort to prevent the breakage would have been easier than the resolution.