AmazonBasics is a private label of products owned by Amazon. The subsidiary was founded back in 2009 and initially offered only basic products, such as cables and office consumables. More and more products are being added under the AmazonBasics label every day. Today, Amazon retails thousands of products under the AmazonBasics label, ranging from paperclips to living room sets. The only common point amongst all of these products is that they are very aggressively priced, usually selling for significantly less than any other competitive product from an established brand.

In this review, we are having a look at a very popular low-cost UPS that Amazon distributes under the AmazonBasics label, the AmazonBasics Aurora Vista 1500VA. Much like its name suggests, it is a very basic design with minimal features, yet it is very aggressively priced. Taking the renowned Amazon customer service into account, it seems like an amazing deal for that kind of output.

We received the Aurora Vista 1500 VA UPS in a very simple cardboard box with nothing but Amazon’s logo on it. Inside the box, the unit is protected by thick packaging foam slabs. Inside the box, we found only an AC power cable, a USB cable, and a manual. 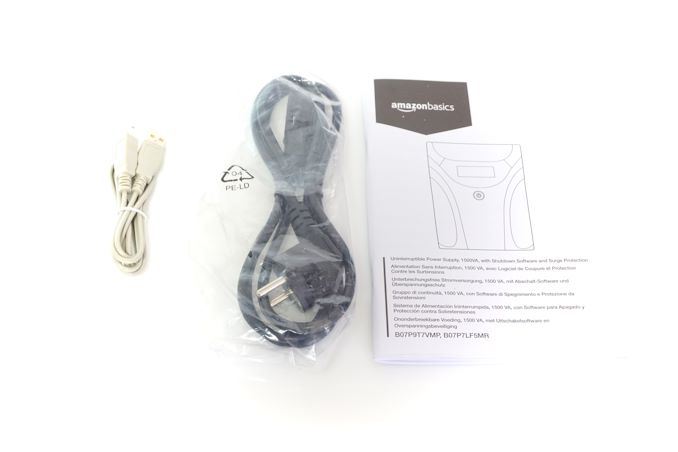 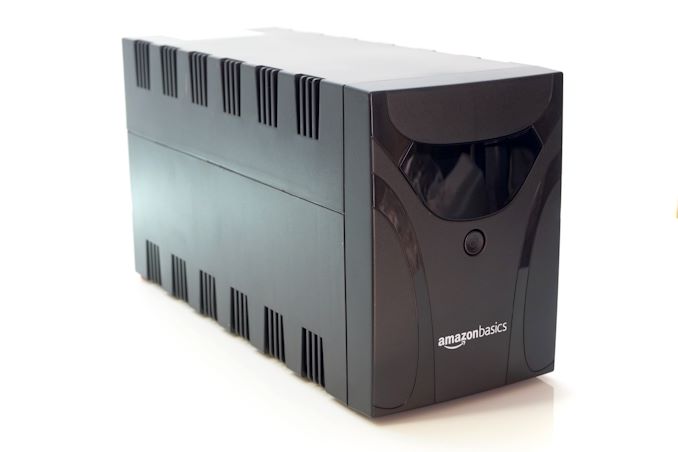 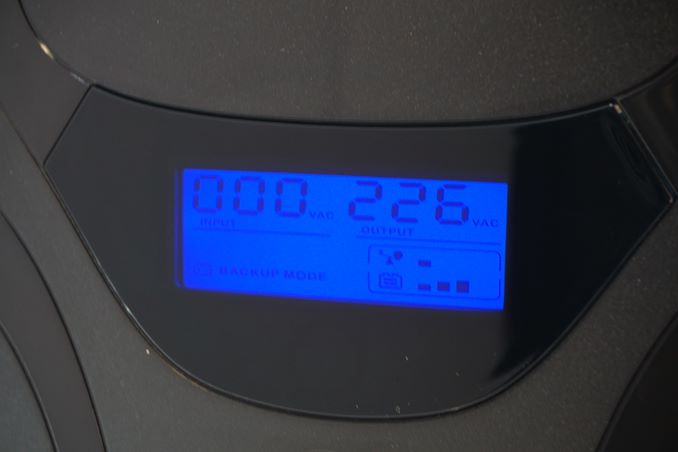 The screen of the Aurora Vista 1500 VA is basic and has very poor viewing angles. It is almost impossible to read the screen if you are not directly in front of the unit. The information displayed are just the current status of the unit, the input and output voltage, and the battery/load status in 25% increments. 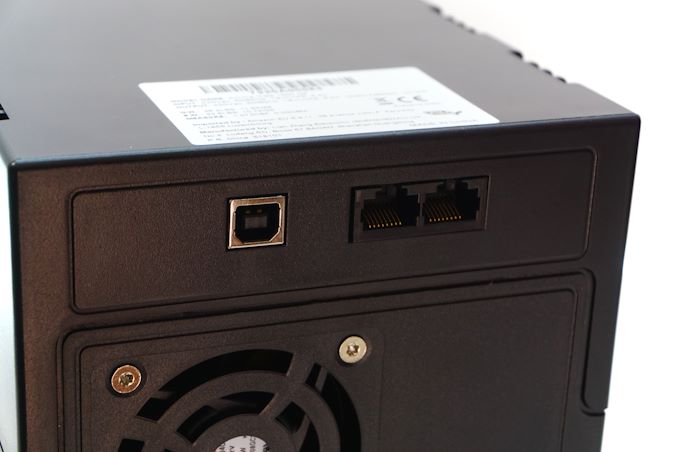 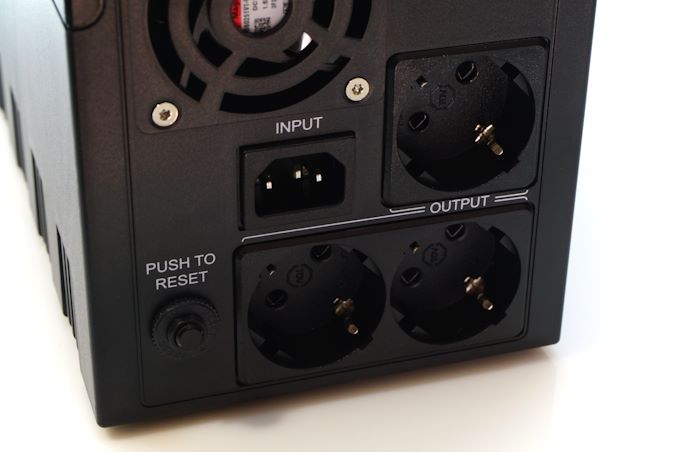 We received the EU/DE version of the unit, therefore it has three standard Schuko output plugs. Unlike some products where some of the output plugs act only as surge arresters and are not connected to the battery output, all three Schuko plugs are connected to the battery backup. The number and type of output plugs depend on the region/country the UPS is being sold at, with Amazon also offering a version with C13 output plugs available. All versions have the typical IEC C14 input plug, as well as a USB port and an RJ45 surge arrester. A simple but effective restorable circuit breaker is placed at the lower-left corner of the backside. 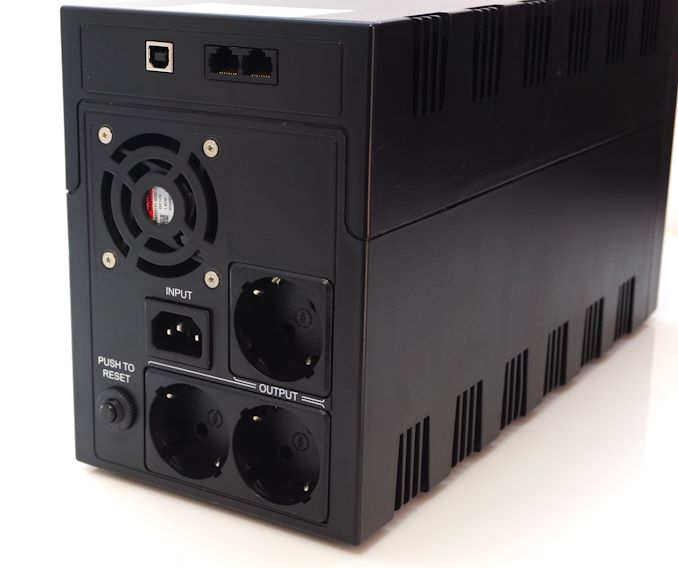 The fan of the unit will only turn on while the unit is charging its batteries or while it is running on battery backup. It has only one speed and it is clearly audible. Placing this unit into a bedroom, or any area where noise is a concern, would be a poor choice if grid anomalies are frequent. The air intakes are small openings across the top and bottom edges of the unit, which is a simple but very effective design. 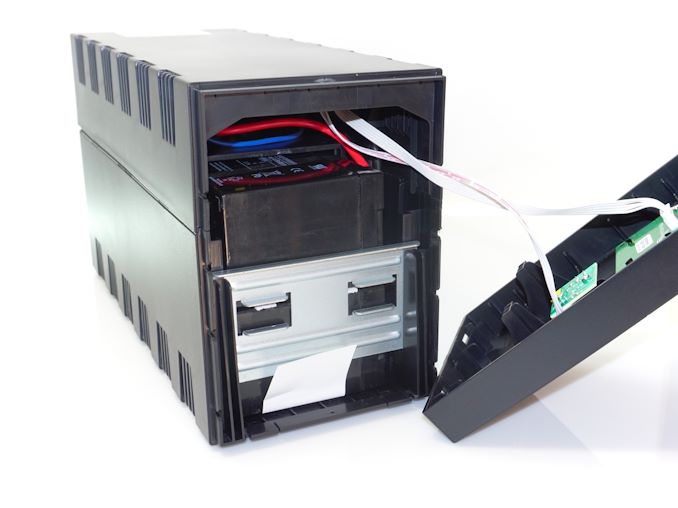 The front fascia of the unit can be removed to access the battery compartment. It cannot be simply pulled off though, as a screw at the bottom side of the fascia is holding it locked in place. Once the screw is removed, the fascia can be snapped off the main unit by simply using a significant amount of force. Behind it, we can see two batteries secured using a metal brace. The metal brace is not fastened and can be removed by simply pulling it upwards. 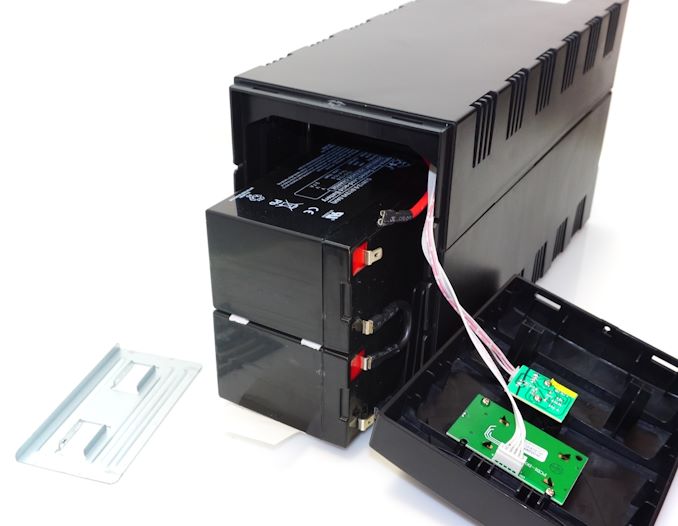 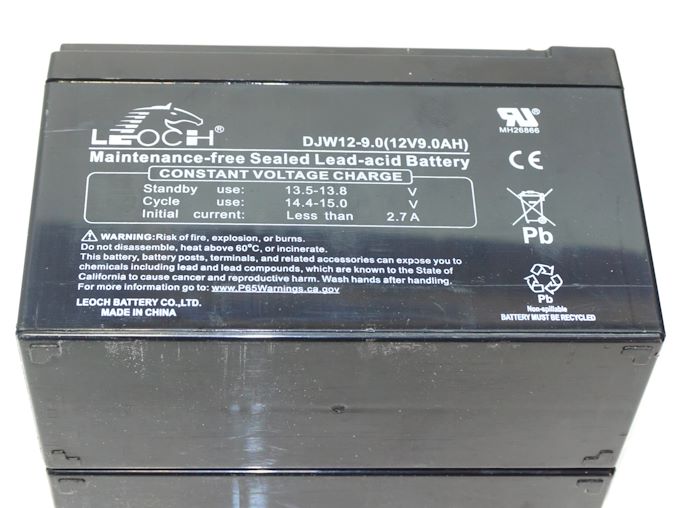 The manufacturer of the two batteries is Leoch, a Chinese manufacturer that is one of the largest on the planet. Leoch batteries are considered to be of at least average quality or better, which makes them a great choice for a low-cost UPS. The AmazonBasics Aurora Vista 1500 VA unit has two 12V 9Ah batteries connected in series (24V 9Ah output). 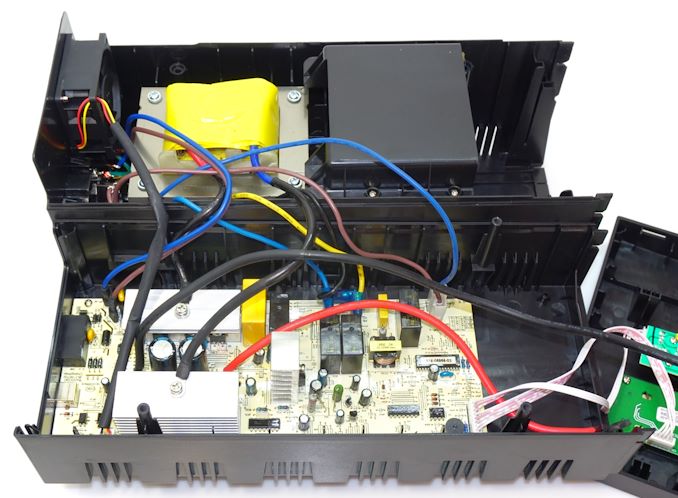 Splitting the UPS open reveals a sizable transformer secured at the bottom half of the body, while the circuitry is attached to the top. The parts are strategically placed to receive the airflow coming in from the side intake openings. The OEM of the Aurora Vista 1500 VA is Lian Zheng Electronic Co Ltd, a Chinese OEM of industrial electronic products. That name probably means nothing to most readers but Lian Zheng actually is one of the biggest and most reputable UPS OEMs on the planet. Many products sold under premium brand names are actually manufactured by them. 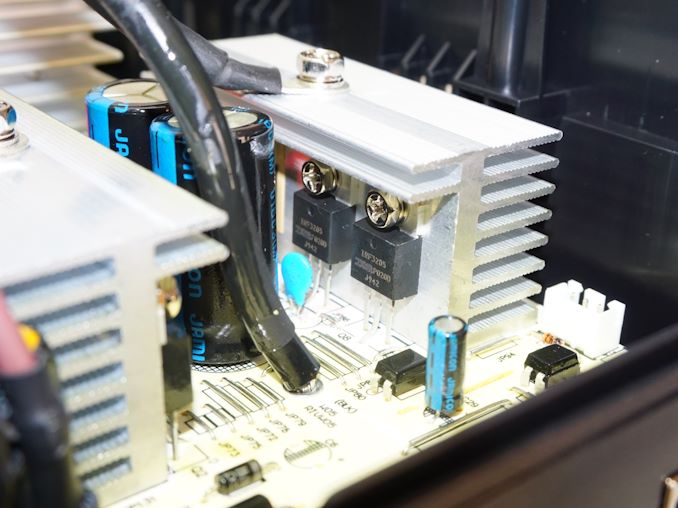 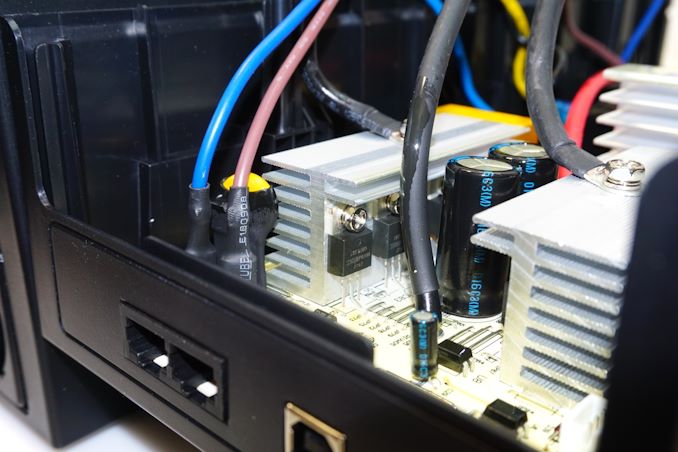 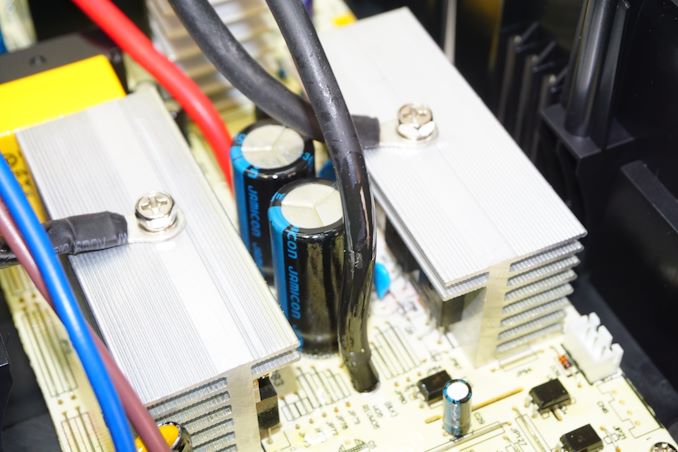 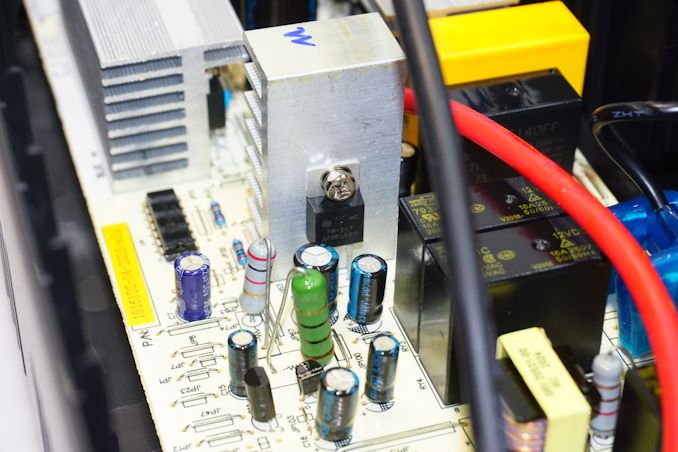 The circuitry is, as expected, extremely basic. All of the capacitors are electrolytic and supplied by Jamicon, a known but mediocre manufacturer. The eight main MOSFETS are IRF 3205. These are very commonly found in low-cost power electronic devices because they are very cheap and reliable. Their performance and/or efficiency is not great, as these were released over two decades ago. A single 7812CT voltage regulator can also be found on an overly large heatsink by itself. 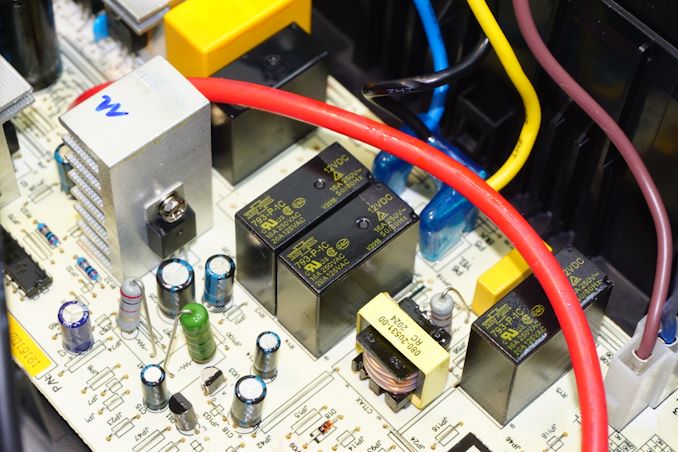 The relays are supplied by Song Chuan, a very reputable Chinese manufacturer with a massive global presence. They are not the best relays available but they are definitely better than what we expected to see in a product of this price range and design philosophy. 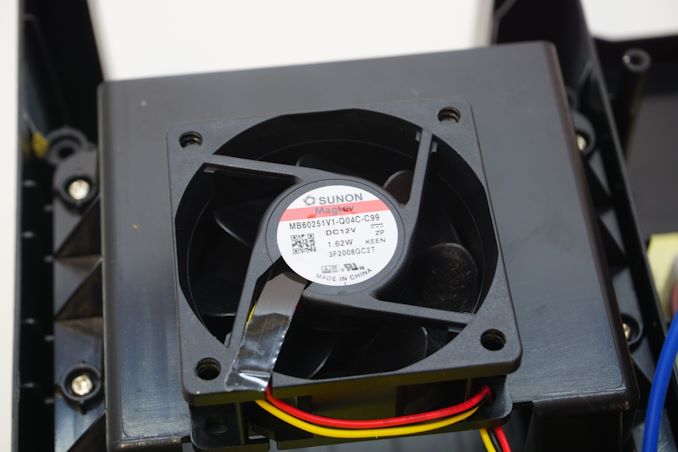 Last but not least, the fan is supplied by Sunon. Sunon is one of the most reputable fan manufacturers in the world, if not the most reputable. On top of that, the fan inside the AmazonBasics Aurora Vista 1500 VA UPS is a Maglev MB60251V1 with a magnetic levitation engine, a design with an inspiringly long lifetime. We rarely see such fans in top-tier products and we definitely did not expect to find one inside an entry-level UPS.