Since the launch of Intel's Alder Lake-based 12th generation Core processors, there have been several reports of high and abnormal temperatures, even at stock frequencies. The art in balancing out the integrated heat spreader (IHS) of a processor is one thing extreme overclockers have been working on for many years now. Typically called lapping, extreme overclockers finely sand down the IHS to make it a more flat and even surface. The aim is to reduce gaps by sanding out imperfections or curvatures. This is so that the cooling plate of the CPU cooler makes better contact with the IHS, and it has been known to reduce CPU thermals by a decent amount. 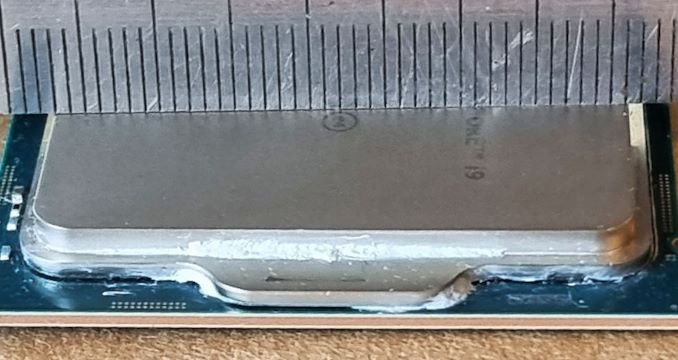 Fellow enthusiast Igor Wallossek published an article on his website, Igorlabs.de, which investigates potential issues with the ILM (independent loading mechanism), which keeps the processor firmly in place within the socket. Doing some investigations myself, our testbed Core i9-12900K which we've used the most doesn't seem to show any noticeable gaps or abnormal curvatures when used with a metal ruler. This, however, changes when we install the CPU into an LGA1700 socket or into one of the readily available Z690 motherboards.

There have been many reports that installing an Alder Lake processor into one of the cheaper Z690 or B660 models causes the CPU socket to bend and the IHS itself. We saw no bending before installing our Alder Lake processor into the socket of the GIGABYTE Z690 Aorus Master, which is a premium board priced around $470. Installing the Core i9-12900K into the socket and locking the ILM into place, we saw noticeable bending on the rear of the board, as our picture above illustrates.

The implications of this are two-fold. Firstly, from a cooling standpoint, it will and can lead to increased thermals due to the gaps this creates between the cold plate of the cooler and the IHS on the CPU. While thermal paste will generally fill some of the gaps, the problem is the nature of the gap and its size that the increased pressure the ILM creates. The second and perhaps the most fundamental part of this, it should NOT be happening.

Buildzoid 'rambles' about the LGA1700 washer mod, a potential fix?

While PCBs can be flexible, the nature of heat creating further expansion could lead to damaged sockets damaged processors and ultimately leave users with an expensive headache. There's also the potential to create permanent bends in the PCB area around the socket. This is not a good thing. It should be noted that LGA1700 motherboards either use ILM's manufacturers by Lotes or Foxconn, but it's reported that both ILMs are affected by this issue.

Fundamentally, there are a couple of potential workarounds to the issue, including a large, robust backplate. Still, on some of the AIO coolers, we have seen recently, these usually come with flimsy plastic backplates. Another potential fix is installing four washers to alleviate the issue. Both Igorlabs.de and Buildzoid have posted content detailing this, with Igor Wallossek doing some testing using washers of a different thickness to show variation.