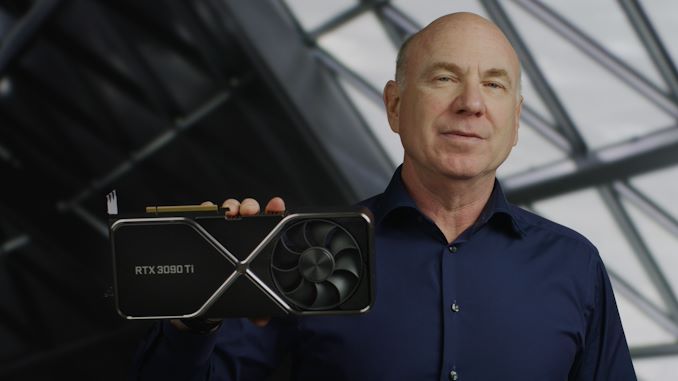 As part of today’s CES keynote for the company, NVIDIA GeForce SVP and GM Jeff Fisher very briefly teased a new flagship NVIDIA video card. The GeForce RTX 3090 Ti as it’s called appears to be a higher clocked version of the current RTX 3090.

Living up to the idea of a teaser, details on the new card are fleeting for the moment, with NVIDIA showing it off primarily to what the public appetite ahead of a more formal reveal later in January. But for now, NVIDIA is confirming that single precision (FP32) compute performance is 40 TFLOPS, which would be 12% higher than the existing RTX 3090. The teaser also confirms that the card is getting fast memory, with a bump to 21Gbps GDDR6X. And of course, the card still comes with 24GB of the stuff.

And for now, that’s all NVIDIA is telling us! According to the company, we should expect to find out more later this month.