One major point of differentiation with the previous generation Surface Laptop 3 was Microsoft partnering with AMD to offer a "semi-custom" design. For the APUs that went into the Surface laptops, Microsoft got chips with an additional graphics unit (CU) enabled for both the Ryzen 5 and Ryzen 7 models, resulting in nine and eleven total graphics units, respectively.

With Renoir, AMD decided to cut back on the total graphics hardware for their integrated Vega GPU, and make up the difference with higher frequencies thanks to the better 7 nm process. As such, a normal 15-Watt Ryzen 5 model will offer six graphics units, and Ryzen 7 offers eight. The semi-custom Ryzen Microsoft Surface Editions do get access to an additional graphics unit on the Ryzen 5 models, bumping it up to seven total, but the Ryzen 7 4980U is not so lucky, and makes do with the same eight compute units as all other Ryzen 7 4000 series processors. Any performance uplifts from the normal Ryzen 7 will be due to the higher maximum frequency, boosted to 1950 MHz on the 4980U, which is 200 MHz higher than the Ryzen 7 4800U, and 350 MHz higher than the Ryzen 7 4700U.

To see how the Surface Laptop 4 performs in gaming, it was run through our standard laptop graphics suite, which includes a couple of synthetic tests, as well as some actual gaming results. For the most part, the comparison devices are either AMD or Intel with integrated graphics. The MSI Prestige, highlighted in blue, features the latest Intel Xe graphics thanks to its Tiger Lake internals. The Surface Book 3 is included just to get a feel for where the integrated results are against a device with a decent dGPU, as the Surface Book 3 features the NVIDIA GTX 1660 Ti graphics adapter. 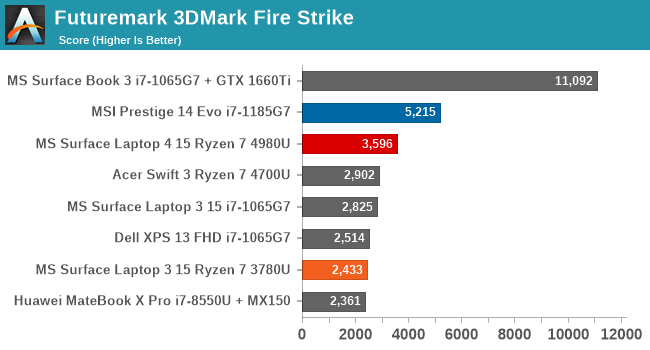 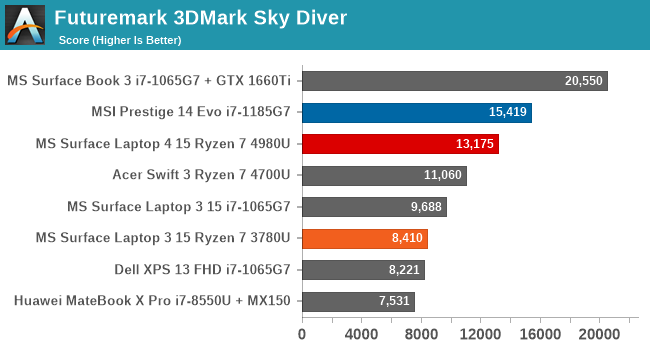 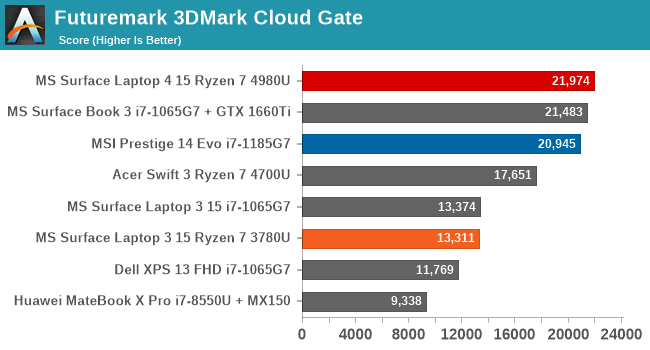 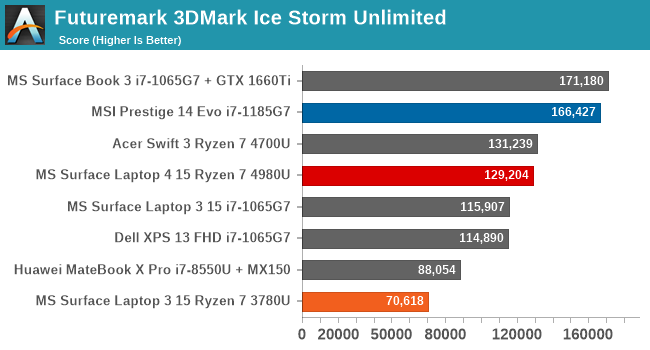 As a purely synthetic test, 3DMark offers several levels of scene complexity, with Fire Strike being the most demanding, and Ice Storm Unlimited being a test which can be run on low-end phones and tablets. Other than Cloud Gate, which is CPU limited, the Renoir platform, even with the highest frequencies available, is not able to match Tiger Lake in terms of GPU performance. The Surface Laptop 4 does show a nice bump over the other devices though, so the increased frequency headroom of the Ryzen 7 4980U certainly helps. 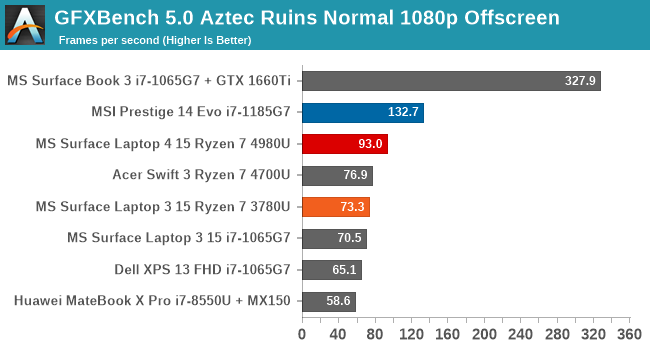 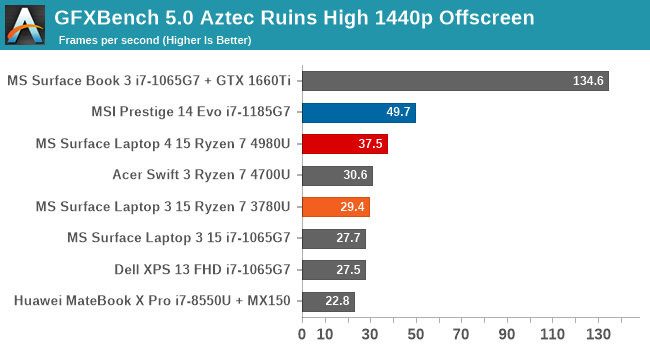 In the second synthetic test, we see a similar result. Although the Surface Laptop 4 with Ryzen is not able to surpass the 96 EU Intel Xe GPU in the MSI Prestige, it is still noticeably ahead of the other devices. 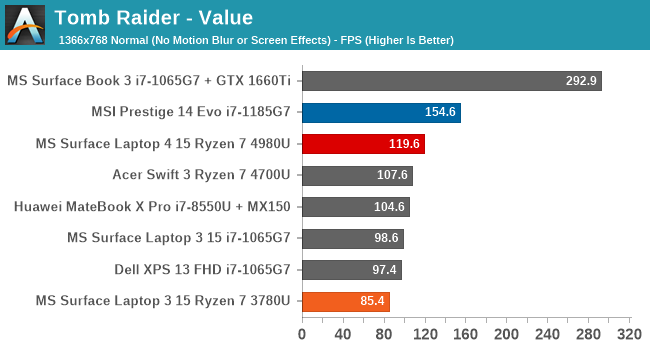 Although several years old now, the first of the rebooted Tomb Raider games can still be very demanding for internal graphics, especially with the resolution and details turned up. On lower settings, it is easily playable, with the Surface Laptop 4 just about hitting 120 FPS at our Value settings of 1366x768 Normal, but on 1920x1080 Ultra, the Surface Laptop 4 hits just 25 FPS average.

Rise of the Tomb Raider 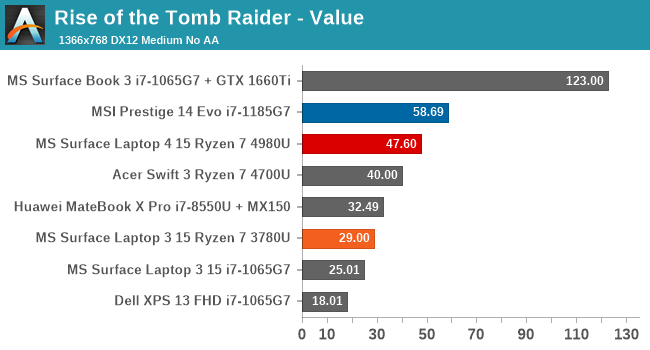 The second installment of the rebooted Tomb Raider series added DirectX 12 support, and cranked up the graphics significantly. At the same Value settings as the previous game in the series, framerate drops to under 50 FPS average for the Surface Laptop 4, and it can’t quite match the Tiger Lake system which is on the cusp of 60 FPS average. This is a game we could not even realistically run on laptops from just a couple of years ago though, so on both the AMD and Intel side, integrated GPUs have come a long way.

Shadow of the Tomb Raider

The latest installment in the Tomb Raider series is one we don’t even normally run on iGPU devices, as the results are unplayable, but to get a comparison, it was included this time. At 30 FPS average for the Surface Laptop 4, this is likely not going to be a great experience. 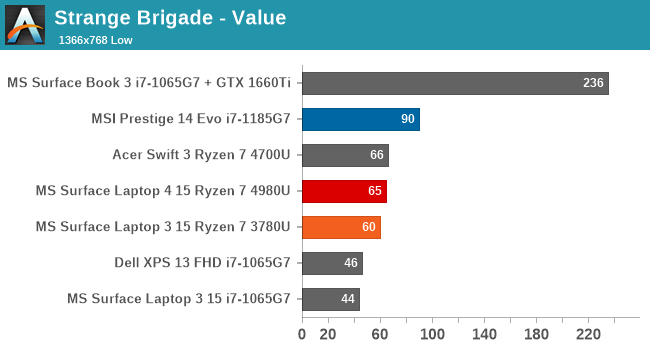 Another DirectX 12 title, Strange Brigade is not as demanding as some of the latest AAA titles, and as such, is definitely playable on devices with the latest integrated graphics. At 65 FPS, the game is 100% playable, but still well behind Tiger Lake. 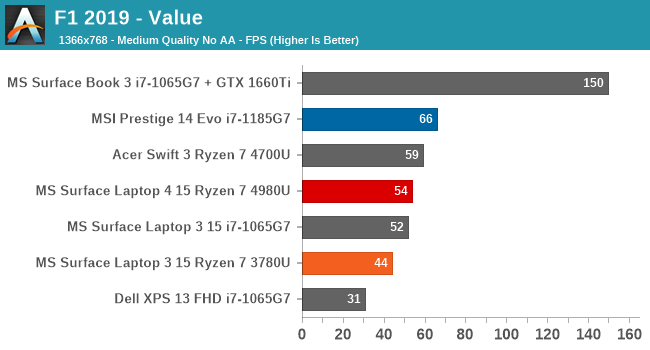 So far, the results have been quite clear, and although the gaps tighten up on F1 2019, as it is more CPU intensive than some of the previous games would have been, the Renoir APU still finds itself behind Tiger Lake. 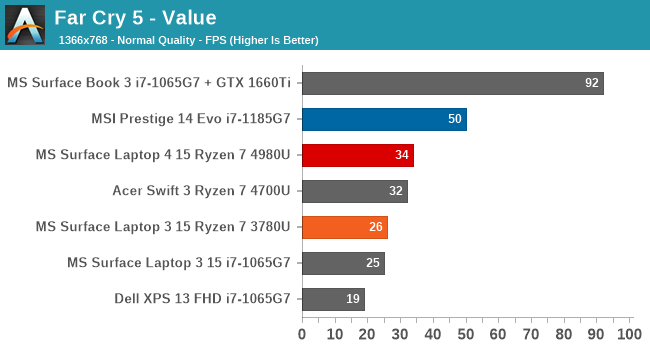 Far Cry is also a game that can be somewhat CPU limited, but not so much with these lower powered GPUs, and again, the pattern is the same as all of the other tests. What is interesting is how much better the Renoir system is than the previous Surface Laptop 3 with Picasso though. Moving down from 11 CUs down to 8 was easily overcome with the extra frequency headroom, and increased CPU throughput of the Renoir design. The latest AMD Cezanne APUs do not increase the GPU size either, so in theory, performance should be fairly similar to the Surface Laptop 4 on these titles.

It is a bit of a let down to see that for this latest generation, Microsoft was not able to again add a larger GPU to the Ryzen 7, like they did for the Surface Laptop 3. The Ryzen 7 4980U is technically a semi-custom design, but really this only down to it being the best binned Renoir APUs that AMD is offering. Given AMD's history with graphics, it is a bit surprising to see Intel now leading on integrated graphics performance, especially after years of the UHD 620 and previous generation designs being quite low performance. AMD first made integrated graphics a priority with the original Ryzen APUs, adding in their Vega graphics architecture, and outclassing the competition in the process. But in this case, AMD has seemingly rested on its laurels, and with Tiger Lake, Intel has stolen this crown back. And, with AMD not adding any more graphics units with Cezanne, it is unlikely this will change.

The performance is good, and the extra frequency allowed on the 4980U does bump it ahead of the other Renoir devices we have tested, but AMD's integrated Vega GPU is definitely not the fastest iGPU anymore.