On The Wings of an Eagle: GIGABYTE's X570 I Aorus Pro WIFI Motherboard Tested

The GIGABYTE X570 I Aorus Pro WIFI is a mini-ITX motherboard which is the only small form factor board in GIGABYTE's current X570 product lines. Not only this, but it's currently the cheapest mini-ITX model of any X570 board on the market. Comparing its design to previous generations, this GIGABYTE mini-ITX board drops any garish plastic covers and instead opts for a more svelte black and grey theme. This model does include a strip of RGB LEDs on the underside of the board, which is located at the right-hand side and provides an under glow. For users looking to add their own RGB strips, GIGABYTE has included a pair of headers: an ARGB header and standard RGB header. 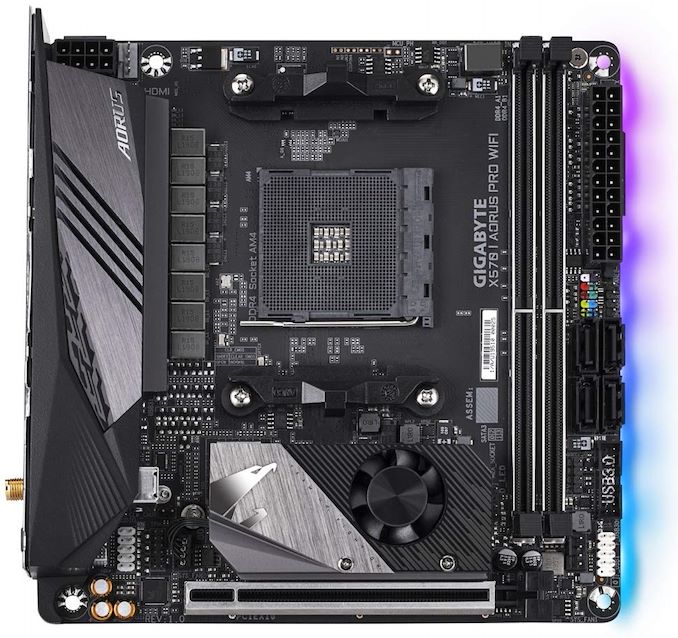 Although the mini-ITX form factor tries to offer users ATX sized features and controller sets, one of the usual size restrictions in size comes into play when looking at the PCIe and memory slots. The GIGABYTE X570 I Aorus Pro WIFI has a single full-length PCIe 4.0 x16 slot which is coated in metal PCIe armor for a more durable slot.

Looking to the memory, this model has two memory slots which support up to DDR4-4400 and can accommodate up to 64 GB of system memory. Users can install both ECC and non-ECC memory, but the X570 I Aorus Pro WIFI will only allow memory to work with unbuffered modules.

Providing power to the motherboard is a 24-pin 12 V ATX motherboard power input, while the CPU is using an 8-pin 12 V CPU power input to provide power. GIGABYTE includes just two 4-pin fan headers with one for the CPU and one for a chassis fan.

Focusing on the power delivery, and the GIGABYTE X570 Aorus I Pro WIFI is using a 6 phase set up for the CPU. This consists of six Infineon TDA21472 70 A power stages and is controlled by an Infineon IR35201 PWM controller. The Infineon IR35201 PWM controller is operating in a 6+2 output with two Infineon IR3553 40 A power stages which are for the board's SoC power rail. While it's not the most powerful power delivery we have seen from an X570 model, it uses a similar design to the ASUS ROG Crosshair VIII Impact (7+1 instead of 6+2), and we know the Impact is a capable model. Each phase is individual and the board isn't using teaming or doublers for an effective power delivery design. 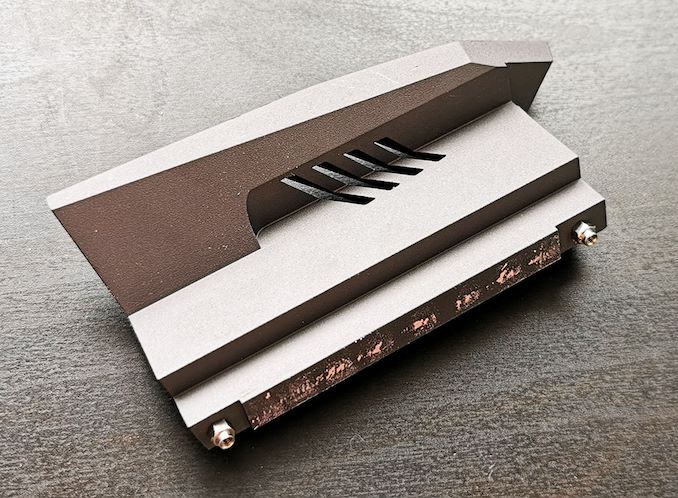 Looking at the power delivery heatsink, it integrates into the rear panel cover which makes it look bulky, but upon removing it, it's quite light and small. It doesn't have much in weight and uses four small channels to direct air over the top for chassis with good passive airflow to help keep VRM thermals in check. 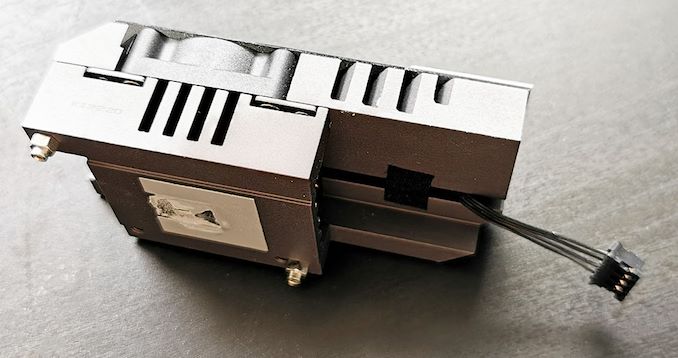 Removing the actively cooled X570 chipset heatsink, this also doubles up as one of the boards PCIe 4.0 x4 M.2 heatsinks. Users looking to benefit from the rapid speed and bandwidth from a PCIe 4.0 X4 M.2 drive are likely to use the top slot over the one on the rear of the board. That being said, the chipset/M.2 heatsink doesn't include any thermal pad or interface which seems strange as it effectively renders the active segment of the heatsink moot. On top of that, when a user has an M.2 drive installed in this slot, it could potentially block some of the airflow directed towards the X570 chipset itself. 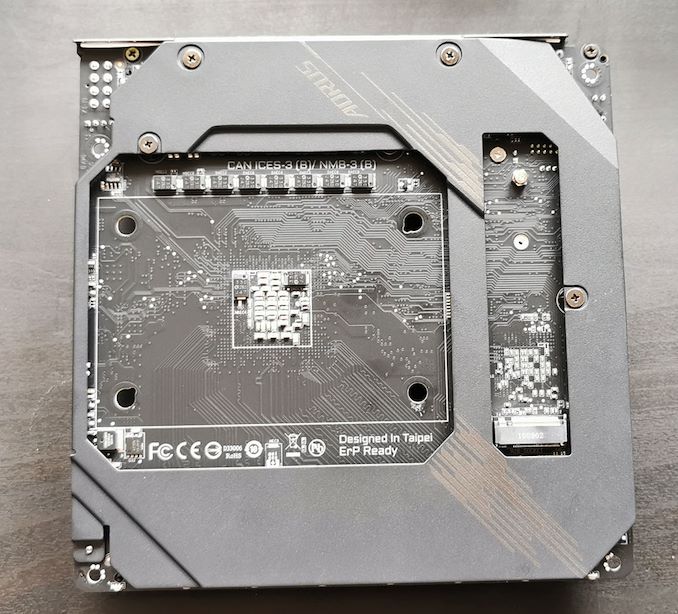 On the backside of the GIGABYTE X570 I Aorus Pro WIFI is a black metal backplate which covers the majority of the PCB. Adding some extra cooling capacity is a thermal pad between the backplate and the rear of the power stages which makes up the boards power delivery. Also on the rear is a PCIe 4.0 x4 M.2 slot which doesn't include a heatsink out of the box. Both of the boards PCIe 4.0 M.2 slots support drives up to M.2 2280, while the board also has four straight-angled SATA ports with support for RAID 0, 1, and 10 arrays. The SATA ports are angled such that each one can be removed individually (other boards require you to remove one cable before another, due to bad design).

Looking at the rear panel and GIGABYTE has included a Q-Flash button to allow users to flash the firmware without a CPU or memory installed. Also present is one USB 3.1 G2 Type-A, one USB 3.1 G2 Type-C, and four USB 3.1 G1 Type-A ports. A trifecta of video outputs makes the GIGABYTE X570 I Aorus Pro WIFI more than handy when used with Ryzen based APUs with two HDMI 2.0, and a single DisplayPort 1.2 output. A Realtek ALC1220-VB HD audio codec powers the three 3.5 mm audio jacks, although the board doesn't include any form of optical output. For networking, the board has an Intel AX200 Wi-Fi 6 wireless interface with two antenna ports on the back panel also offering BT 5.0 support, while a single Intel I211-AT Gigabit Ethernet controller provides a single slot for wired networking.

What's in the Box 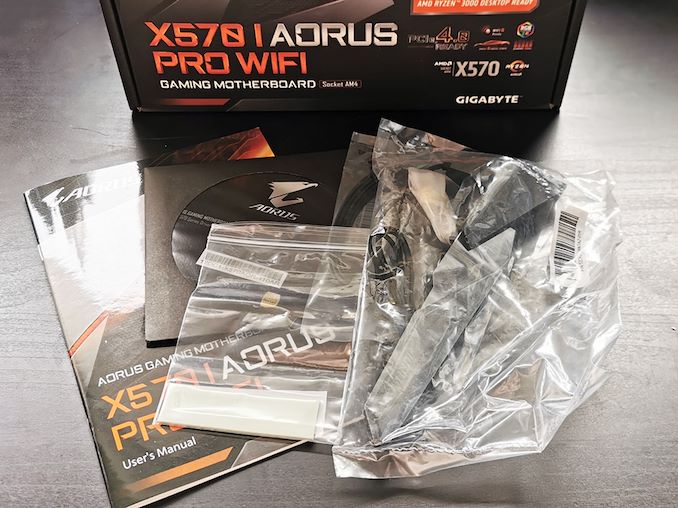 The accessories bundle included with the GIGABYTE X570 I Aorus Pro WIFI isn't huge, but everything needed to get a system up and running is included. Some of the standout accessories include a user manual, an Intel AX200 Wi-Fi 6 desktop antenna, two black SATA cables, and an M.2 thermal heat pad.

As we mentioned in regards to the front-mounted M.2 slot underneath the actively cooled chipset heatsink, this pad doesn't quite fill the gap between the heatsink and an M.2 drive and is likely for users looking to install an M.2 drive on the rear of the board.