We used the Corsair Hydro X set to best effect in our testing of the ASRock X570 Aqua. To complement the review, we decided to do a full system build featuring ASRock's AMD RX 5700 XT Taichi 8 GB graphics card and other hardware which Corsair provided. Everything bar the motherboard and the AMD Ryzen 3950X processor for this build was provided by Corsair. The full system specifications and test setup are located on the next page, although the full performance of power delivery thermals combined with Corsair's Hydro X parts can be found in our ASRock X570 Aqua review. As the ASRock X570 Aqua comes fitted with its own custom water block which cools the CPU, the power delivery on the motherboard, and the chipset, we didn't use any of Corsair's water blocks for this system. 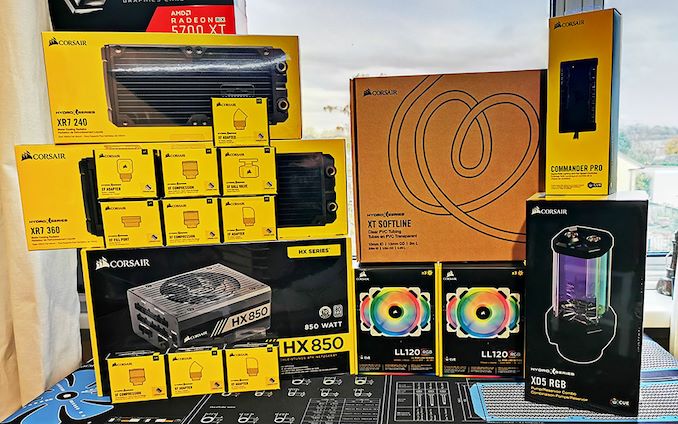 The Corsair Hydro X Aqua System: All the AMD

Since we aren't using any of Corsair's CPU or GPU blocks for this system, all of the focus is on the core components themselves including the XD5 pump and reservoir combination, a single XR7 240 mm radiator, as well as Corsair's LL120 RGB 120 mm cooling fans and it's Softline range. We did intend to use an additional 360 mm cooling radiator, but the Corsair Crystal 680X with our hardware wasn't compatible due to the ASRock X570 Aqua's larger than normal E-ATX size. 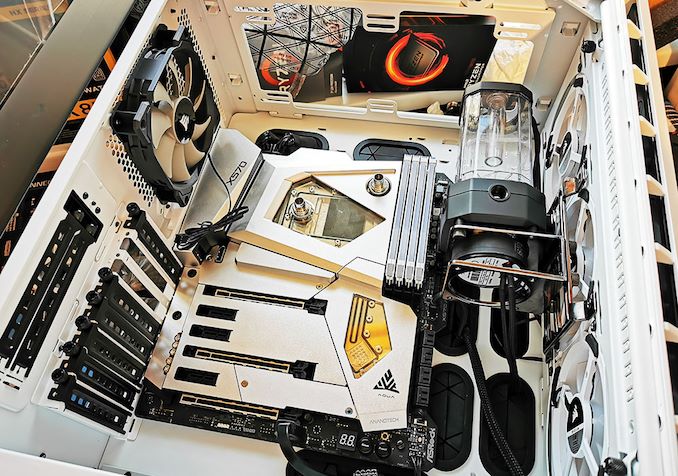 The first task before even unboxing the hardware was to work out which way it was going to be configured and routed around the Corsair Crystal 680X chassis. As our motherboard is E-ATX and this is technically for ATX motherboards, we did experience a couple of headaches. This wasn't to the detriment of Corsair, but more our hardware was just too big to fit in. As a result, we decided to go with a single 240 mm radiator to cool the CPU, power delivery, and chipset which the ASRock X570 Aqua block covers. 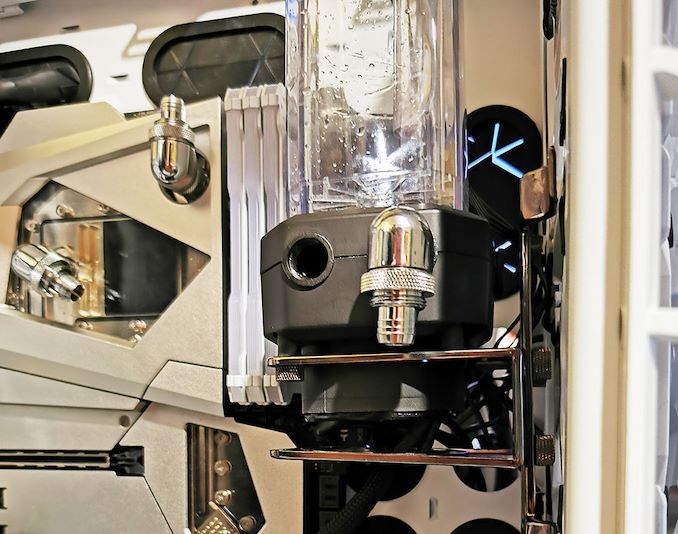 The Corsair Hydro X Series XD5 comes with mounting brackets to allow installation into various parts of a system. We decided to opt for the safer option and mount it to one of the 120 mm intake fans on the front. This was primarily to allow us to show off the XD5 in the front of the chassis, instead of mounting it in the rear chamber. The XD5 itself looks good with its nylon clear chamber, and the mounting kit is solid and sturdy. 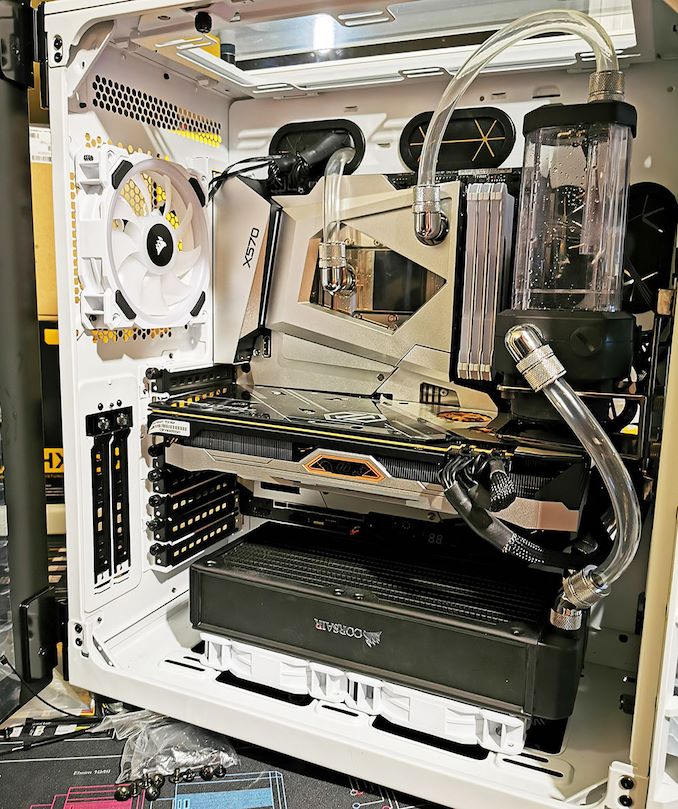 Due to space constraints, we mounted a 240 mm radiator in a pull configuration which intakes air from the bottom of the chassis. We are using three Corsair LL120 RGB 120 mm fans in the front, with two on the radiator, and one in the rear as an exhaust. Each fan is connected to the Corsair Commander Pro controller which allows us to control everything from the Corsair iCUE software. 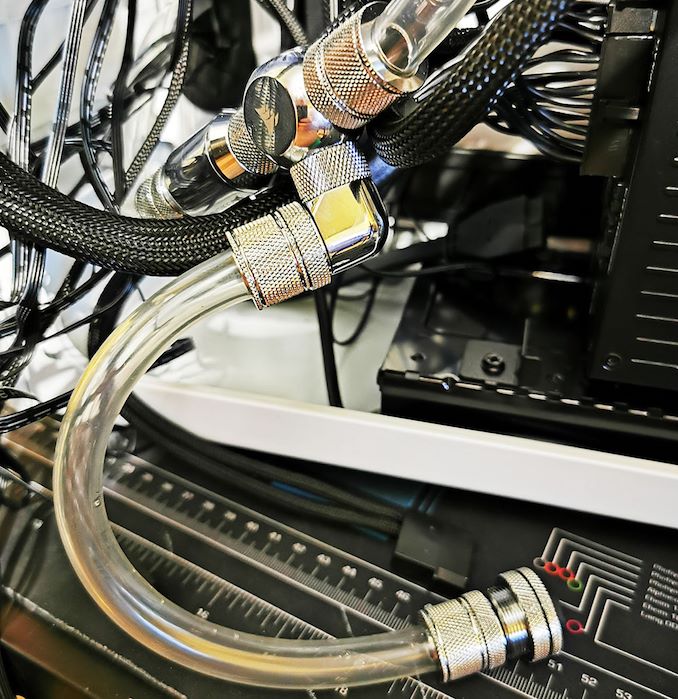 For better aesthetics, we routed one of the tubes through the rear chamber of the chassis, but this also allowed us to create less obstruction in the main chamber without needing to run tubing everywhere across components. For easy draining, we connected a ball valve which we can close for draining, and installed a drain port with plenty of tubing to drain without needing to dismantle the loop. This sits in the rear chamber at the bottom and is tucked away in front of the Corsair HX850 850 watt 80PLUS Platinum power supply. 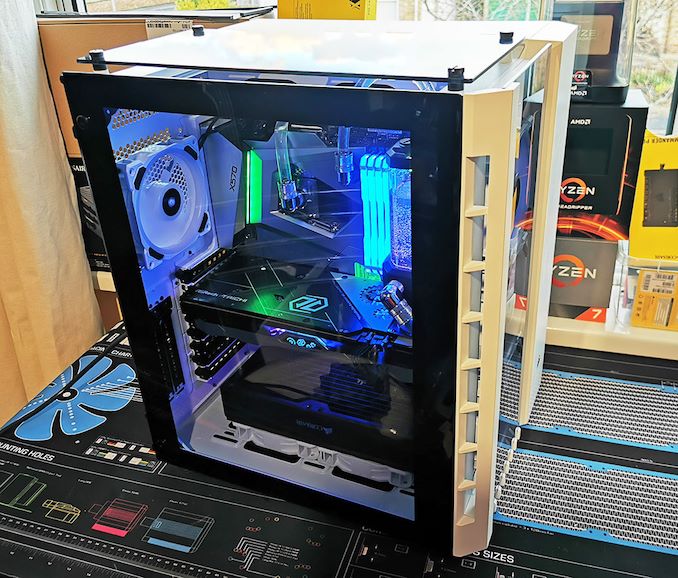 After hours of countless routing and optimization of the tubing and layout, our system was complete. One thing about the Corsair Hydro X series is that it looks good, and is user-friendly making custom loop water cooling more accessible to consumers than ever before. What makes it more accessible is Corsair's Custom Cooling Configurator allows users to put in their hardware into the configurator and allow Corsair to work out what water cooling components are needed for whatever array of components are being used, or plan to be used. The Corsair Cooling Configurator is easy to use, intuitive and looks modern. This is something Corsair has put many months into designing for the end-user to make its buying decisions easy. 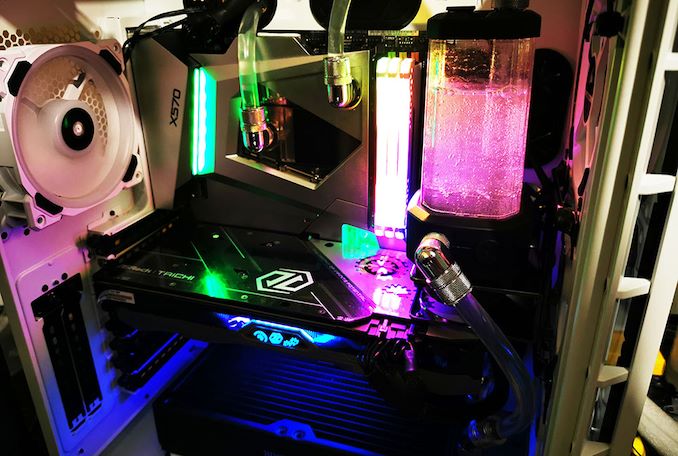 With the addition of the Corsair Commander RGB hub, we could connect all of the Corsair Hydro X series components including the fans and XD5 pump and reservoir combo up and sync everything up to the Corsair iCUE software; this includes the Corsair Vengeance Pro RGB memory. At present only ASUS hardware is certified to be used with Corsair iCUE in an exclusive partnership we learned about during CES 2020. As we are using ASRock hardware, we had to sync them up individually, but we like the contrasting look and having the ability to add effects.