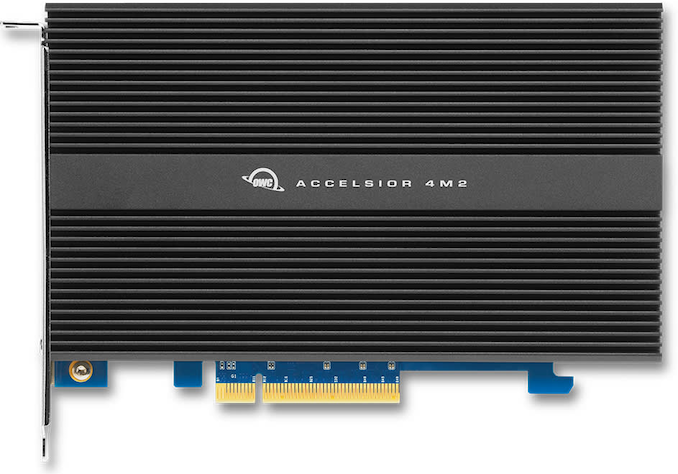 Just in time for the launch of Apple's newly redesigned Mac Pro tower, OWC has introduced the ‘fastest SSD [they've] ever built’, the Accelsior 4M2. The high-end solid state drive combines multiple M.2 drives to offer up to 8 TB of storage, with aggregate read/write well over 6000 MB/s.

The OWC Accelsior 4M2 SSD is essentially a PCIe x8 backplane based on the ASMedia ASM2824 PCIe 3.0 switch, which in turn is being used to drive a quartet of PCIe 3.0 x4 M.2 slots. The Accelsior then fills out these slots with four of OWC's Aura P12 M.2-2280 drives (Phison’s PS5012-E12 controller with SLC caching support, DRAM, & Toshiba’s 3D TLC NAND memory). To ensure consistent performance as well as to ensure reliability, the SSD is also equipped with a large heat spreader, as four Aura drives can produce a significant amount of heat. 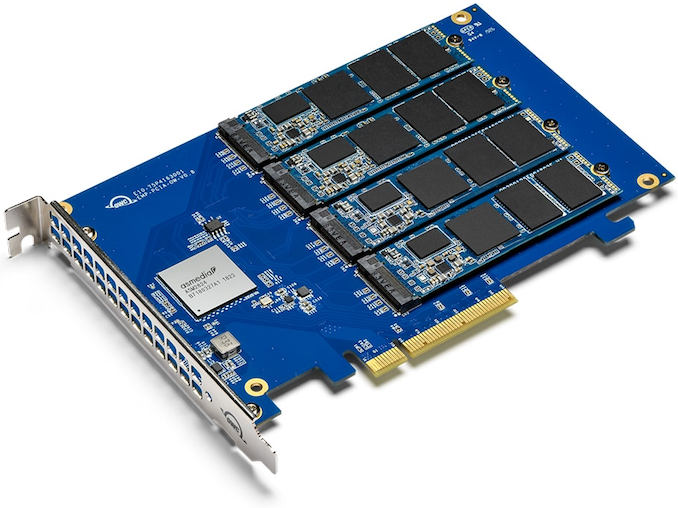 When it comes to capacity, the Accelsior 4M2 storage solution will be available in 1 TB, 2 TB, 4 TB, and 8 TB raw capacities. OWC in turn rates the SSD for sequential read speeds up to 6318 MB/s, as well as sequential write speeds up to 6775 MB/s.

As is often the case for high-end OWC drives, the Accelsior 4M2 is meant to be used with OWC’s SoftRAID software, which supports various RAID modes (RAID 0, RAID 1, JBOD, etc.). Otherwise the drive can also be used in PCs – despite the Mac-focus, it's presented as a generic PCIe card – but PC users will need to supply their own RAID software.