Most of the following firmware analysis comes from our ASRock Z390 Gaming-ITX/ac Review as this model and the Z390 Phantom Gaming 7 share near-identical BIOS options and layout. Any differences will be highlighted below.

The ASRock Z390 Phantom Gaming 7 is using its Phantom Gaming UEFI firmware and remains consistent with other versions across multiple chipsets including both AMD and Intel platforms. This firmware has two primary modes of operation with the EZ mode being the more user-friendly of the two designed to offer novice users the ability to change basic settings and view information. The advanced section opens up a host of customizable options including power, overclocking, and platform related settings. The EZ mode includes a bluish-grey color theme, while the advanced mode makes use of a gaming-themed red base design. 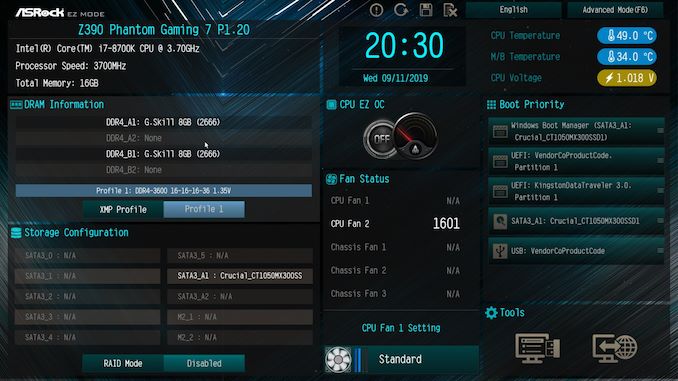 Pressing the Del key during system POST reveals the EZ mode splash screen; this is a blocky and descriptive list of information such as installed CPU, memory and storage, as well as fan status for the three available 4-pin headers. Users can enable and disable RAID mode on the four SATA ports, as well as enable XMP 2.0 profiles on compatible memory. In the top left-hand panel is very basic information about the processor and memory, while the right-hand side has boot priority list which users can click and drag to rearrange which suits best. In the bottom right-hand side corner is a clickable tools menu which lets users flash the firmware via the internet. The CPU EZ OC tool allows users to select between five different CPU overclocking profiles ranging from 4.5 GHz to 5.0 GHz. 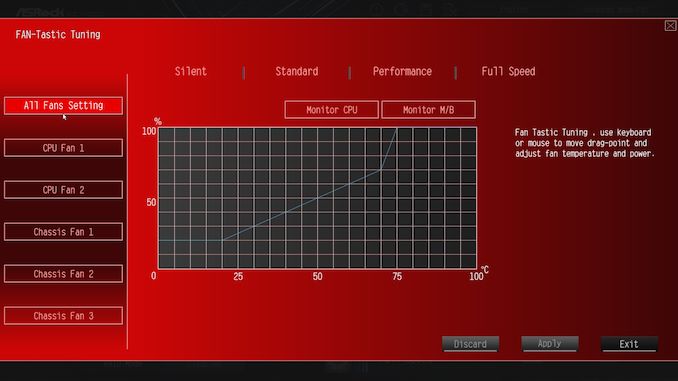 The FAN-Tastic Tuning utility offers fan profile customization with four different presets including silent, standard, performance and full speed. Users can also create their own fan curve profiles based on real-time CPU temperature. Each of the five 4-pin headers can be set up individually or all the fans can be synced to run based on the same profile 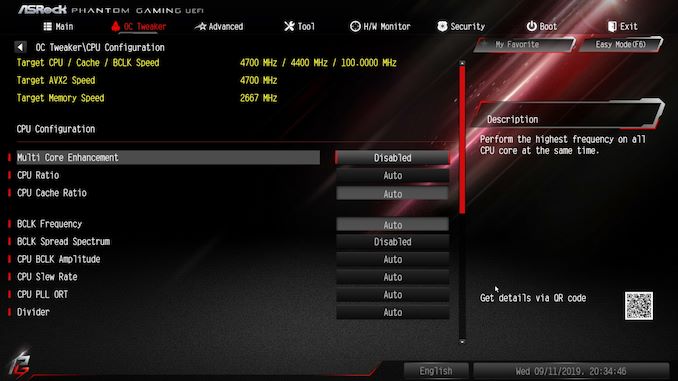 On the EZ mode splash screen, pressing the F6 key opens up the Advanced section. Along the top is a set of sub-headings each with their own range of options for users to customize including OC Tweaker, Advanced, Tool, H/W Monitor, Security, Boot, and Exit. The OC Tweaker is the ASRock UEFI BIOS’s ticket to overclocking and all of the preset overclocking profiles from 4.5 to 5.0 GHz can be applied. Each of the main elements of overclocking is split into three main sections; CPU, DRAM, and Voltage configuration. 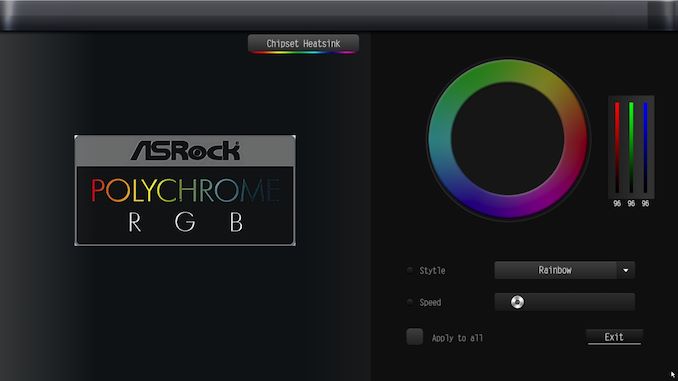 For users looking to customize the styling of the board, the ASRock Polychrome RGB tool within the firmware allows users the ability to alter the effect and color of the integrated RGB LEDs, as well as the inclusive RGB headers. The color of the LEDs can be customized via a slider or via the RGB wheel. The lighting effect can be changed as well as allowing for extra customization on the addressable RGB header and standard RGB header; they can be set individually or synced together for a more uniformed look.

ASRock's Phantom Gaming firmware is easy to navigate around, and clicks and keypresses are responsive with no input lag experienced. Users will find plenty of tweakable overclocking options in OC Tweaker section, and while it's not as feature-packed as boards such as the ASRock Z390 Taichi in terms of available settings, the Z390 Phantom Gaming 7 is aimed squarely with gamers in mind. It takes something very out of the ordinary to mess up a firmware in this day and age, and ASRock's consistency of using a firmware that works efficiently and effectively is something to applaud.

Most of the following software analysis comes from our ASRock Z390 Gaming-ITX/ac Review as this model and the Z390 Phantom Gaming 7 share the same software suite.

The ASRock Z390 Phantom Gaming-ITX/ac comes supplied with a pretty lightweight supplement of software with most useful utility in the list coming from the Phantom Gaming Tuning software. There isn’t much that can be specifically classed for ‘gaming’ so to speak, but there is the ASRock Polychrome RGB utility, and ASRock’s combined Live Update and App Shop software. 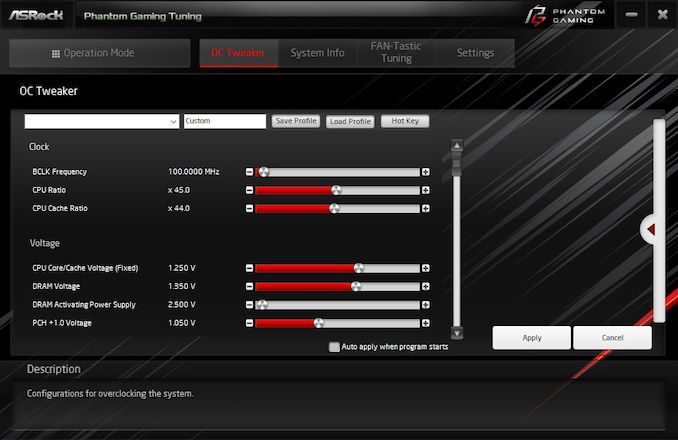 ASRock’s Phantom Gaming Tuning software is identical to the ASRock A-Tuning software we’ve previously seen with an example of this being in our ASRock Z390 Taichi review; the only difference is the design of the interface as this variant is using the Phantom Gaming red and black themed skin. Users can use Phantom Gaming Tuning to overclock within Windows and tweak settings such as CPU VCore, CPU ratio, CPU cache ratio, and even DRAM voltage; unfortunately, there’s no option to alter memory frequency. Phantom Gaming Tuning also gives access to the FAN-Tastic Tuning for users looking to customize their own fan profiles or set the fans to one of the presets for ease of use and uniformity. All of the five predefined overclocking profiles ranging from 4.5 to 5.0 GHz can be applied with all that’s needed after applying, is a simple reboot; the software does prompt this after making key changes. 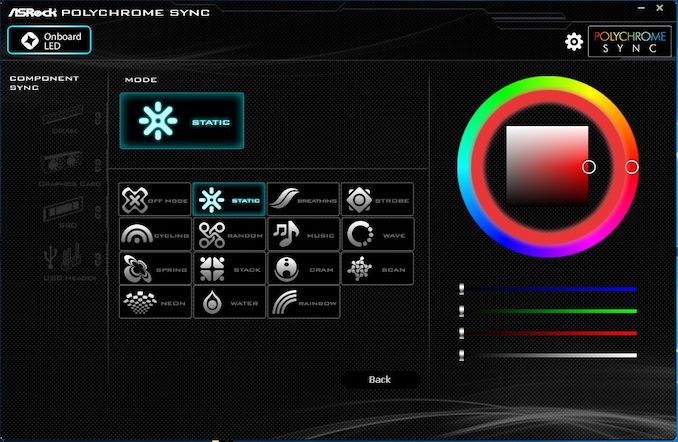 Users can customize the integrated RGB LEDs or strips installed into the two headers via the ASRock Polychrome Sync software. It’s available in the BIOS unlike on the ASRock Z390 Taichi and users can individually apply different colors and effects to different headers, or sync everything together. The ASRock Polychrome is well-laid out in terms of its GUI, and it's also very user-friendly. Some of the lighting effects on offer from ASRock include static, random, wave, and rainbow; there are fourteen different modes not including the ability to switch the RGB LEDs off altogether. 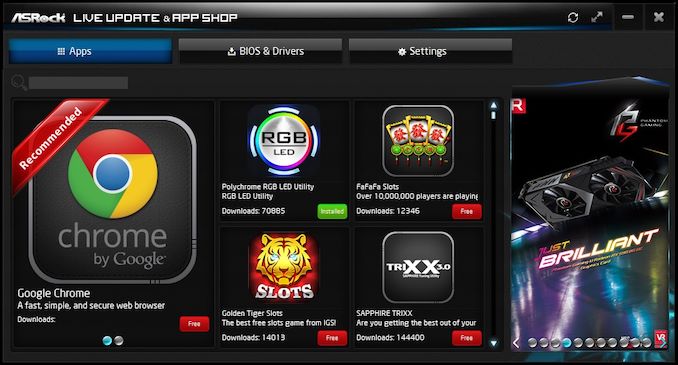 From our experience in the past of the ASRock App Shop, it's a little cluttered with inappropriate gambling apps which aren't quite to our taste. Unfortunately, the ASRock App Shop still advertises these applications, but as it's been combined with the Live Update application too, it's quite functional and useful. Users can download and update the ASRock software applications, as well as keep important drivers up-to-date, as well as update the firmware to the latest version without having to use the tool within the firmware.

As is a frequent occurrence within our motherboard testing of late, manufacturers are including the audio drivers for the onboard audio codecs but aren't supplying relevant software to allow users to control it. ASRock makes a note in the marketing of the Z390 Phantom Gaming 7 that it supports Creative's Sound Blaster Cinema 5 software, but fails to provide a download link to this on the official product page, or within the driver installation disc supplied with the board at retail. This is disappointing to see given the Z390 Phantom Gaming 7 does included an uprated Texas Instruments NE5532 headset amplifier which works with the front panel audio connector. Even a basic variant available for download would have sufficed here.