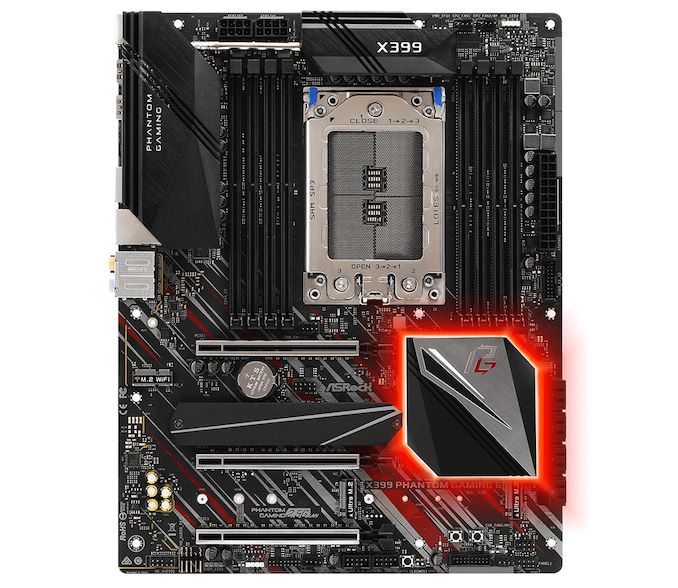 On the design of the X399 Phantom Gaming 6, the overall theme centres around black aluminium heatsinks and a matte black PCB with red and silver accents on the bottom half of the board. The chipset heatsink follows the same accentuation and adds a Phantom Gaming logo on the silver section. Underneath the chipset heatsink is RGB LED lighting which can be controlled via the ASRock Polychrome RGB software or via the BIOS. Users have the option to add their own RGB LED strips with support for two regular RGB 12V headers and a single addressable RGB header; there is support for Razer Chroma products which can be accessed via the software. 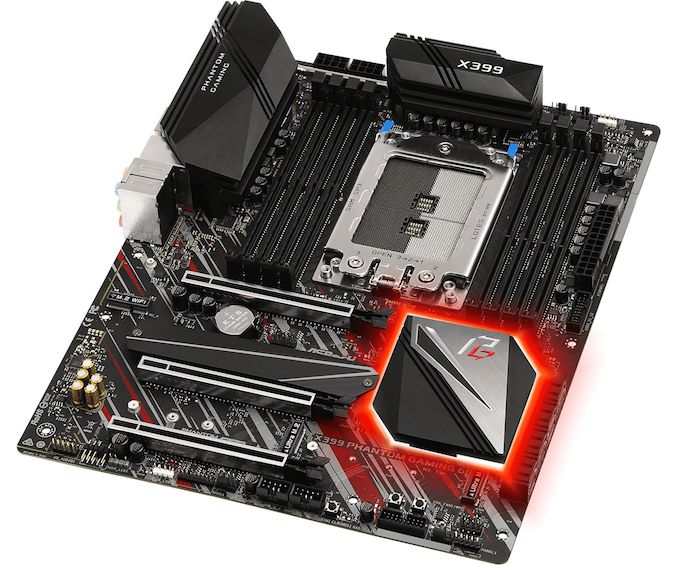 Focusing on the top half of the motherboard, there are two 8-pin 12 V ATX inputs designed to provide the CPU with the required power from the PSU. Flanking either side of the Threadripper TR4 socket is a total of eight memory slots; four on either side. Threadripper processors have support for quad-channel memory and this board specifically supports up to 128 GB of DDR4-3400. Cooling support stretches around the board's edge with a total of five 4-pin headers present. These are divided into three sections; one for the CPU fan, one for a water pump/AIO and three for chassis fans. 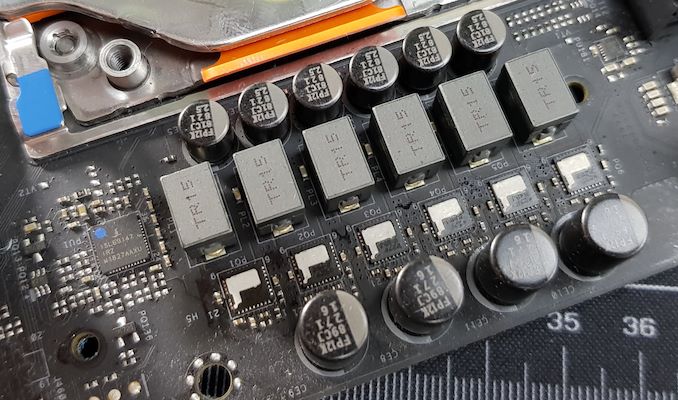 On the power side, the ASRock X399 Phantom Gaming 6 uses a 6+2 configuration with two individual AMD SVI2 PWM controllers. This includes an Intersil ISL69147 PWM controller handling the 6-phase CPU Vcore and an ISL69144 4-phase PWM controller taking care of the 2-phase SoC section. ASRock’s MOSFET of choice is the Intersil ISL99227 power stages rated at 60 A and feature direct metal contacts which make up all the boards eight phases; no doublers in sight on this model. Making up the rest of the power delivery is eight 60 A inductors with one assigned to each power stage and is using Nichion Black 12K capacitors throughout.

Providing power to the CPU is two 8-pin 12 V ATX CPU power inputs and the X399 Phantom Gaming 6 has support for Threadripper processors up to 180 W TDP. For a chip such as the Threadripper 2950X, the power delivery is very capable for all but the most extreme of overclockers and enthusiasts, users and gamers will find a power setup like this good enough for the boards price point. 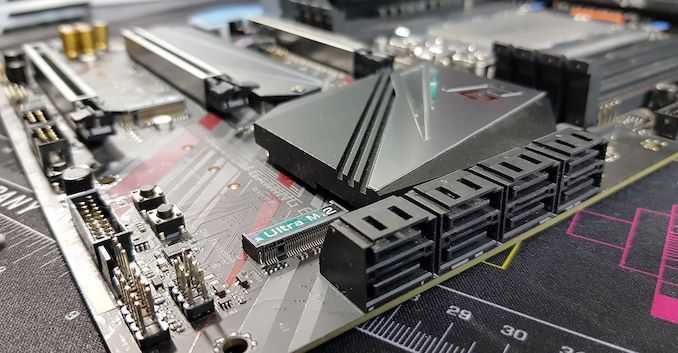 ASRock has implemented three full-length PCIe 3.0 x16 slots which operate all with full bandwidth. Each slot is protected with ASRock Steel Armor and ASRock hasn’t included any PCIe 3.0 x1 slots. The ASRock X399 Phantom Gaming includes three M.2 slots all capable of supporting NVMe SSDs, with the third slot supporting both PCIe 3.0 x4 and SATA drives. On the top slot, up to M.2 22110 drives can be installed while the other two slots located level with each other support up to M.2 2280 drives. At the bottom right-hand corner of the board is eight SATA slots with support for RAID 0, 1 and 10 arrays. 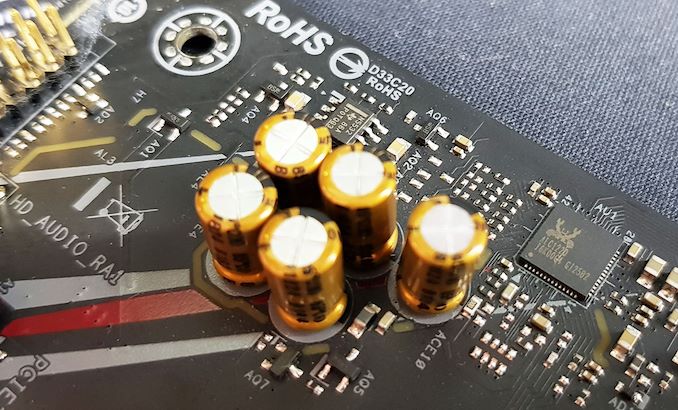 Located at the bottom of the right-hand side of the board is the audio section with a Realtek ALC1220 HD audio codec which is completed with five Japanese Nippon Chemi-Con gold audio capacitors. The audio is separated from the rest of the PCB and includes a front panel audio header with a right-angled connector; the ALC1220 codec doesn’t include an EMI shield. ASRock has also included a Texas Instruments NE5532 header amplifier to bolster the quality of the front panel audio.

Just to the right of the audio PCB is a variety of headers with one of the RGB 12 V headers and a single addressable RGB 5 V header; the second RGB 12 V header is located at the top right of the board. Also present is a TPM header, two chassis fan headers, two USB 2.0 headers allowing for four ports, one of the two USB 3.1 G1 headers, a clear CMOS button, a reset and power button, as well as front panel connectors for power switches.

Touching on more of the USB connectivity, the rear panel has just two USB 3.1 G2 ports consisting of a single Type-A and Type-C, with a further eight USB 3.1 G1 Type-A ports. The X399 Phantom Gaming 6 has the capability to host up to eighteen USB ports when the two USB 3.1 G1 and two USB 2.0 (two ports each) headers are factored in coupled with the rear panel ports. Also located on the rear panel is dual RJ-45 LAN consisting of a Realtek Dragon RTL8125AG 2.5 GbE Gaming NIC and an Intel I211-AT 1 GbE controller; the I211-AT has support for PXE. The Realtek ALC1220 audio codec offers five 3.5 mm color coded audio jacks and S/PDIF optical output, as well as a legacy PS/2 keyboard and mouse combo port. 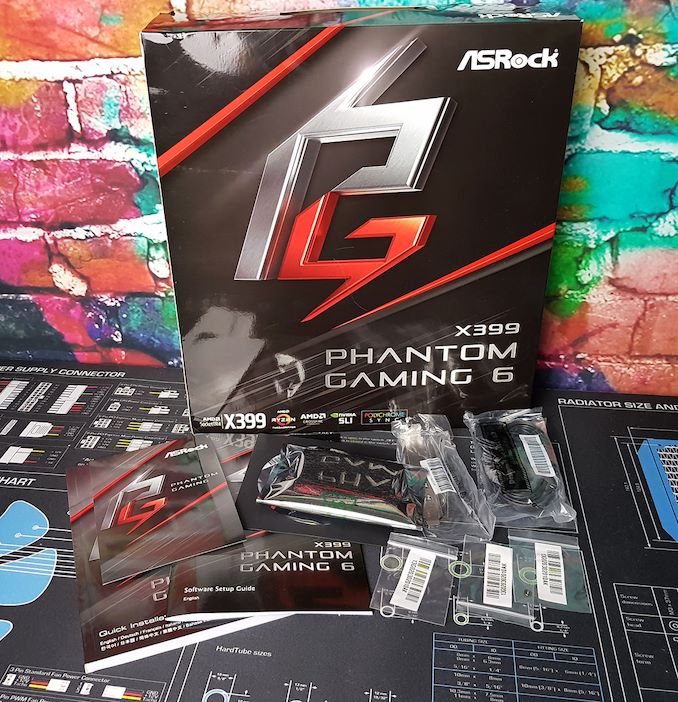