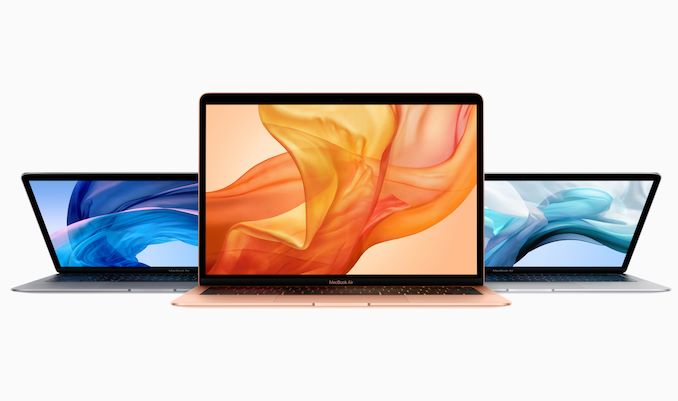 This morning at a keynote in New York City, Apple took the wraps off of their latest notebook update, the 2018 MacBook Air. The entry-level member of Apple’s laptop lineup is finally getting a much-anticipated redesign, which is seeing the laptop adopt most of the same design characteristics and technologies as Apple’s other laptops, including TouchID and Apple’s T2 controller. Still coming in with a 13.3-inch screen – and now in Retina – the laptop will be shipping on November 7th.

When it was introduced in 2008, the MacBook Air employed a then-unusual ultra-portable laptop design, most famously demonstrated by Apple’s equally unusual marketing gimmick of showing it easily fitting into a manila envelope. Since its introduction the MacBook Air paved the way for Ultrabooks as whole in the process, and within Apple’s lineup it eventually settled as the entry-level member of the MacBook family. However in more recent years the laptop ended up neglected, as Apple focused on integrating more expensive technologies into their laptops and with prices to match, which was counter to the MacBook Air’s entry-level nature. As a result, until today the last time the MacBook Air had been significantly updated was in early 2015. So today’s announcement marks the first big update for the laptop in almost 4 years.

In terms of design, the MacBook Air fits right in to Apple’s modern laptop families. In fact at first glance it’s not especially distinct from Apple’s other wedge-shaped laptop, the 12-inch MacBook. The vanilla MacBook itself essentially split the difference between the MacBook Air and the MacBook Pro – taking the size of the former and pairing it with the overall aesthetic design and some of the technologies of the latter – and while the MacBook itself was never a de-facto replacement for the Air, it’s now clear that this is the direction that Apple has wanted to take their laptop line as a whole. 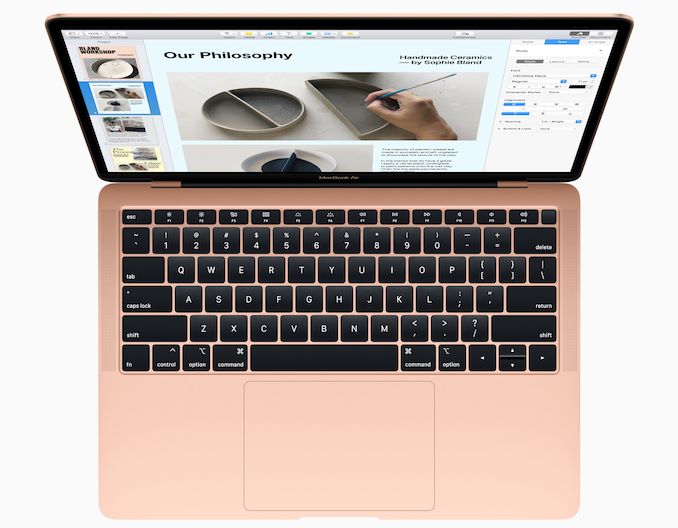 The end result is that by and large, the MacBook Air is the 13.3-inch MacBook that never was. It employs the same wedge shape and aluminum body as the MacBook, and even comes in the same Gold/Silver/Space Grey color trio. In terms of dimensions the laptop is 30.41cm x 21.24cm – giving it a slightly smaller footprint than the previous MacBook Air – while the thickness at the largest point is down from 1.7cm to 1.56cm. Interestingly, the laptop is actually a bit less wedge shaped than its predecessor, as the thinnest point has increased from 0.3cm to 0.41cm. The laptop’s weight is also down a bit, from 1.35kg in the old model to 1.25kg on the new Air.

Meanwhile the focus on slimming the already small MacBook Air down means that the laptop has incorporated a number of technologies and design elements from Apple’s other laptops. This includes the move to exclusively using USB Type-C ports for all charging and data connectivity, with the new laptop getting two of these ports on its left side (versus 1 for the MacBook). Furthermore these are both Thunderbolt 3-capable ports, with all the features and bandwidth that entails, making the Air more like the Pros and less like the vanilla MacBook in this regard. Apple has also retained the 3.5mm audio jack, however the SDXC card slot is no more. 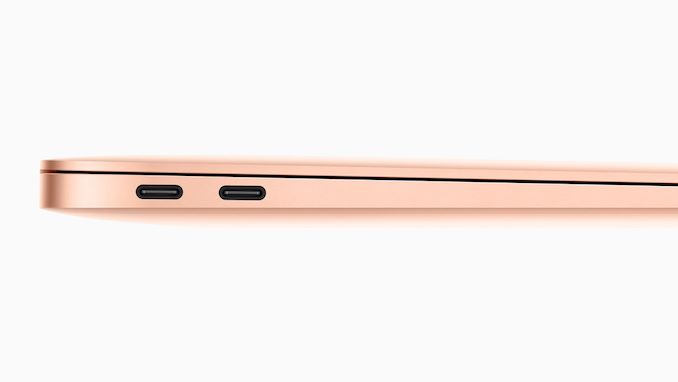 The slim design also means that Apple has integrated their modern butterfly-switch keyboard & Force Touch trackpad combination. First introduced on the MacBook back in 2015, the butterfly switch was designed to be thinner and more stable than contemporary switches, though the shallower key travel has received mixed feedback. Notably, this is now also the largest up-to-date laptop that Apple offers without a touch bar, as Apple stopped updating the touch bar-free 13-inch MacBook Pro earlier this year. Meanwhile like Apple’s other laptops, the Force Touch trackpad offers a solid-state trackpad that generates haptic feedback through a linear actuator, making the entire trackpad a single consistent device, and doing away with the diving-board effect of a pivoting trackpad.

Under the hood details are a little harder to come by. Curiously, Apple is only offering a single CPU option here, an Intel Core i5. And while the company never names the specific processor models they use, the specifications here – 3.6GHz turbo with Intel UHD Graphics 617 – .

Update: Intel has since posted information about the chip on the Ark website, confirming it's the Core i5-8210Y.

The i5-8210Y is one of Intel's new Amber Lake-Y CPUs. Launched back in August, Amber Lake is Intel’s latest-generation 5W(ish) chips and goes under the 8th Gen Core branding. Compared to the Broadwell (5th Gen Core) chips in the previous MacBook Air, these chips represent a big step up in capabilities and performance, incorporating a newer CPU core design as well as a newer GPU design. However it’s also notable that the new chips, even in cTDP Up mode, are also much lower power than the older 15W U-series chips Apple used, which means that processor power consumption should be significantly reduced – and the chips thinner as well – though the total performance gain won’t be quite as much as if Apple had stuck with U-series chips.

As best as we can tell, the Core i5-8210Y is likely to be one of Intel's "off roadmap" chips, which is an SKU that's made at the behest of a single or small number of customers. These aren't always publicly documented by rhe company, especially if it's not going into a consumer device. There's nothing particularly special about the 8210Y – it's just clocked a bit differently than Intel's standard chips – but for that reason I'm not immediately expecting that we'll see it anywhere else. By the numbers then, the 8210Y is essentially an Amber Lake chip that's permanently in cTDP Up mode, giving it a de facto 7W TDP. This improves the base clockspeed to 1.6GHz. Meanwhile Apple trades some CPU turbo for some GPU turbo; the 3.6GHz CPU turbo is a bit lower than Intel's standard i5 chip, however the 1.05GHz GPU turbo is 100MHz higher as a result.

Using Amber Lake also means we’re once again looking at LPDDR3 memory for an Apple laptop. Apple outfits the standard model with 8GB of the stuff, with 16GB being an option. Amber Lake doesn’t support LPDDR4, so Apple’s options are to either stick with LPDDR3 or use less power efficient DDR4, which is something the company did do for the 15-inch MacBook Pro.

Like all of Apple’s other Macs introduced in the last 12 months, the new MacBook Air also incorporates Apple’s T2 co-processor. The chip essentially incorporates all of the hardware processing functions that the Intel CPU doesn’t offer or which Apple wants to handle themselves, including audio input processing (for Hey Siri), image signal processing (for the FaceTime camera), hardware video encoding, secure boot, a secure enclave for Touch ID, system management controller functionality, and serves as a (impressively high performance) SSD controller as well. The T2 is one of the biggest differentiators Apple has in the laptop space right now with respect to internal components, as pretty much everyone else uses Intel’s standard hardware.

Speaking of SSDs, the MacBook Air will come with a range of SSD capacities. The base model unfortunately isn’t getting any kind of capacity upgrade from the previous MacBook Air – still shipping with just 128GB – though storage performance should be remarkably better. Meanwhile the top configuration is now 1.5TB, 3x that of the old Air’s top configuration. 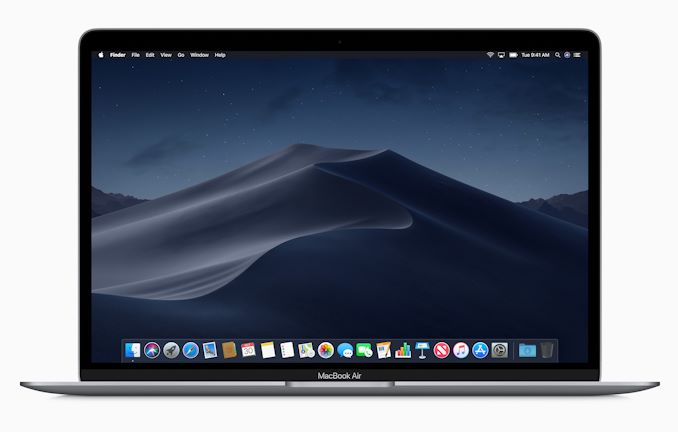 The other big and quickly noticeable improvement for the new MacBook Air is the display. Whereas the last-gen Air was the last Apple laptop without a Retina display, the new Air finally gets its pixel density boost. The laptop uses a 2560x1600 panel, and keeping with Apple’s other laptops this is (thankfully) another 16:10 panel. In virtually every respect the new display should be a major step up over the previous Air, not only offering greater pixel densities but switching to a LED-backlight IPS display, versus the previous Air’s very cheap 1440x900 TN display. The net result is greater color stability at off-angles and a wider color gamut that should come a lot closer to the complete sRGB color space.

Rounding out the package, the new MacBook Air incorporates a 50.3 Watt-hour battery. Apple is rating the laptop for 12 hours of battery life, and while this will vary with the workload, their estimates are generally on the mark. Interestingly this battery is slightly smaller than the 54Wh battery in the previous MacBook Air; the lower-power SoC and other improvements mean that average power consumption has dropped a bit, so Apple can hit the same 12 hours on a smaller battery.

On the whole then, the new MacBook Air should be a significant upgrade from the previous model in almost every way, from processing power to display quality. However the increased focus on quality is also matched by an increased price tag, and in general is in-line with Apple’s efforts to focus more on high-end, high-margin products in the Mac space. As a result the new Air starts at $1199, $200 more than the previous model. Notably this is $100 cheaper than the base 12-inch MacBook, meaning this is still the cheapest (modern) MacBook Apple offers. Though it does seem to put a nail in the coffin of the idea of a sub-$1000 MacBook, especially as Apple seems more interested in moving those users on to the new iPad Pros.