Today, AMD released Radeon Pro Software Enterprise Edition 18.Q3 WHQL, on their usual quarterly pace. Given that the last release brought in Windows 10 April 2018 Update support, and the one before that introduced Adrenalin Edition to enterprise, 18.Q3 is much more low-key, focusing on the usual bug fixes, performance optimizations, and virtualization updates.

18.Q3 does bring a manual fan control setting, which is claimed to provided up to twice the performance over default settings on certain workloads without affecting warranty. Being pro video cards, Found under the Global Tuning tab, ‘Fan Control’ will adjust fan speeds of different GPUs. AMD also notes general year-on-year performance improvements in professional applications, citing a 53% speedup in Audodesk 3ds Max and 33% speedup in Siemens NX. And as far as stability goes, AMD is sure to cite their commissioned driver stability report by QA Consultants from last month, based on CRASH testing. In that instance, for AMD Pro cards 18.Q2 was used, and more details can be found in the report. 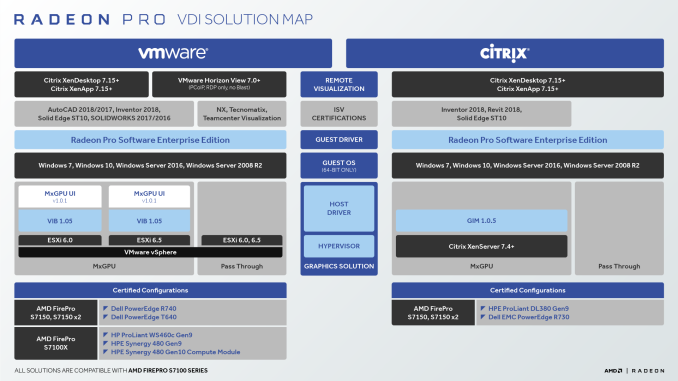 As for AMD’s MxGPU, their hardware-based SR-IOV virtualized graphics solution, 18.Q3 is coupled with an updated March production-level host driver for Citrix XenServer MxGPU, while XenDesktop and XenApp guest drivers have been updated with 18.Q3 binaries for cloud-deployed 64-bit Windows 10 and 7 platforms. The packages and compatibility notes can be found on AMD’s Citrix Pro Driver page.

Similarly, VMware vSphere ESXi 6.5 guest drivers for MxGPU and passthrough have been updated with 18.Q3 binaries for cloud-deployed 64-bit Windows 10 and 7 platforms. Meanwhile, their Guest Interface Manager (GIM) open source KVM host OS driver remains available on GitHub as a technical preview and the guest drivers have not been updated since Adrenalin Pro 17.12.2.

Wrapping things up, 18.Q3 comes with a multitude of fixes:

AMD notes that Multi-GPU Eyefinity Pro on Windows 10 is not currently supported on any hardware for 18.Q3.

Driver Options is not available with multi-GPU configurations, with the Radeon Pro Duo Polaris, and for mobile platforms.

New Radeon Pro Software Enterprise Editions are released on the 2nd Wednesday of the 2nd month of the quarter. The next release will follow on 11/14/18 (18.Q4).