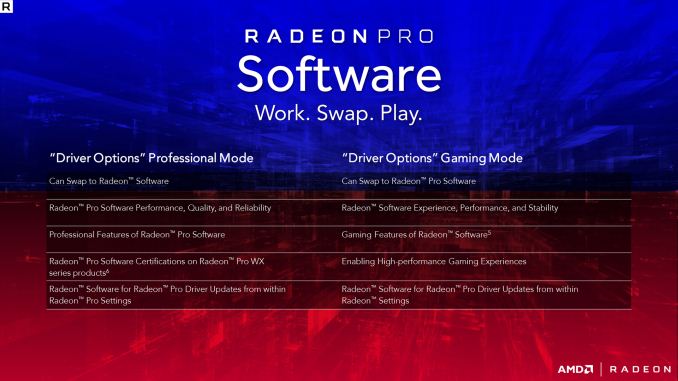 Note that the SSG is currently only compatible with Windows 10, and that all three Vega-based professional cards do not currently support Windows 2016. Additionally, 17.Q4 does not support Multi-GPU Single Large Surface on Windows 10 on any hardware. For Linux support, details can be found in the release notes for Radeon Pro Software Enterprise Driver 17.Q4 for Linux.

17.Q4 has a number of bug fixes and identified issues, some of them specific to Vega or VDI. For resolved issues, AMD documents the following:

The updated drivers for AMD’s professional workstation GPUs are available online at the AMD’s professional graphics driver download page. More information on this update and further issues can be found in the Radeon Pro Software Enterprise Driver 17.Q4 release notes.

New Radeon Pro Software Enterprise Drivers are released on the fourth Thursday of the quarter. The next releases will follow on January 25th 2018 and April 26th 2018.