ASUS' Republic of Gamers brand has gone a slightly different route on the new Z370 chipset in that they are trying to make each of their ranges more distinguishable to the consumer. With any motherboard chipset refresh, it offers manufacturers the chance to refine their range thus hopefully improving on previous models and addressing concerns from the previous generation. The main differentiating features for ASUS this time around include a new clear-cut segmentation of their range of boards, a new heatsink design on the majority of the line-up, better memory support due to their 3rd generation T-Topology technology, and a slew of RGB customisable lighting/addressable RGB headers.

Starting off with what ASUS has touted as being one of their bestselling motherboards of the previous generation, the ROG Maximus X Hero slots in an interesting position as it doesn’t quite have the same clout as the Formula/Extreme boards have, but offers more features over the more mid-range Strix boards. There will be two Hero SKUs available with the only difference between both is one will come included with integrated dual antenna 802.11 AC Wi-Fi and one will be without. ASUS’s reasoning for doing this is simply a choice; giving consumers control over whether they want integrated wireless network capabilities or they want to save $15-$25 over something they think they won’t need. 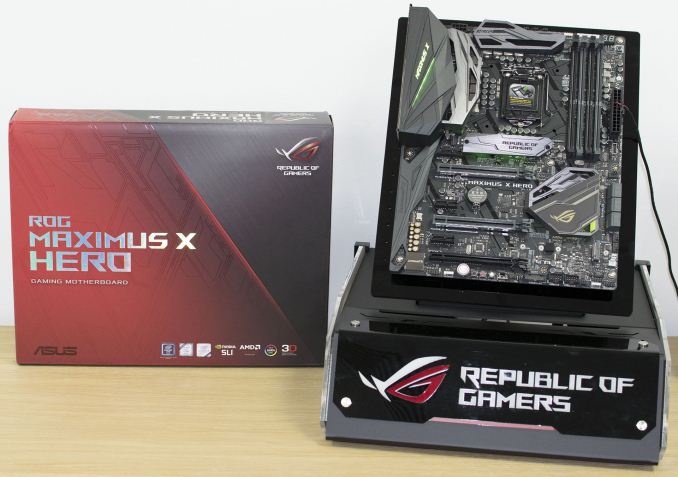 The ROG Maximus range of boards is designed to exude the feeling of combining strong unique aesthetics with high-quality components to deliver strong performance in gaming and overclocking. The Z370 Maximus X Hero features a design with a huge emphasis on new metallic heat sinks that are an upgrade over the plastic heatsinks found on the Z270 version. Also along a theme is a single M.2 heatsink which features the ROG Logo etched in (the Z370 Hero has two overall M.2 slots available, this is in addition to six SATA 6Gb/s ports).

Two of the three full-length PCIe 3.0 slots feature metal shielding (which most manufacturers seem to have integrated into their more mid-range to high-end models), and are paired with three PCIe 3.0 x1 slots. The top slot and second slot operate at x16 and x8/x8 with the lanes being fed from the Coffee Lake processor, but the very bottom full-length PCIe 3.0 slot operating at x4 from the chipset. Both SLI two way and CrossFire three way are both supported by this board and the majority of day one launch Z370 boards from ASUS ROG. 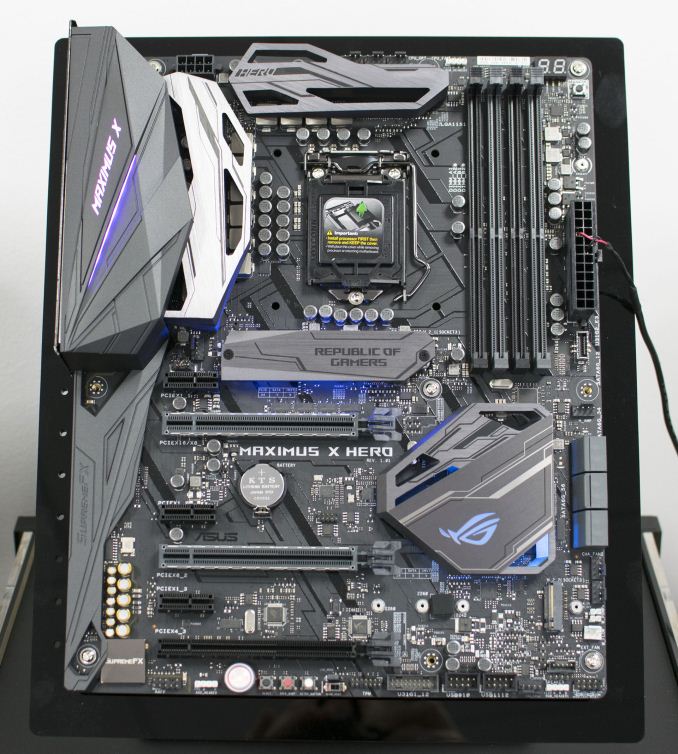 Still touching on slots, the Hero has four memory slots, with a maximum capacity of 64GB of DDR4, and an official DDR4-4133 being supported. ASUS has implemented an Intel I219V gigabit Ethernet controller, which they report as having high reliability and performance, which is paired with Realtek ALC1220 audio codec which ASUS themselves call the SupremeFX S1220. On top of the codec, ASUS has enhanced the onboard audio on the Hero with an ESS Sabre ES9023P DAC.  Another unique inclusion over the previous Z270 model is an integrated and pre-mounted I/O shield which ASUS claim as a patented technology.

A wave of cooling options and a slew of fan headers are dotted around the board including the more recent inclusion of a dedicated water cooling area. There is support for five 3/4 pin fans, including a high-amperage fan header, three thermal sensors with two of them being designed with water cooling in mind, in addition to a single flow header and two dedicated pump headers.

A plethora of rear I/O real estate should keep even the most gadget and peripheral hungry user happy with USB 3.1 10 Gbps in Type-A, Type-C and a stack of four USB 3.1 5 Gbps ports. You can run additional USB 3.1 and USB 2.0 ports from front panel header capabilities; a single header for USB 3.1 5 Gbps giving an additional two ports, an onboard USB 3.1 10 Gbps header, and dual USB 2.0 headers for a maximum of four additional ports. Finishing off the rear I/O is a clear CMOS switch, a BIOS Flashback button and DisplayPort/HDMI outputs for on-board graphics.

Other ancillaries include the two RGB strip headers, and a single addressable RGB header which has recently been supported by various manufacturers including BitFenix and Cablemods for use with ASUS ROG AURA SYNC software to allow for customisability and color matching between various supported components and peripherals.

It is very apparent that the Maximus X Hero is focused towards high-end gamers looking for a solution that covers support for water cooling, high-end performance Coffee Lake CPUs and high bandwidth and fast DDR4 memory. This allows users to feature a ROG Maximus range board with a lot of decent features, but without the hefty price tag of an Extreme, Formula or Code.