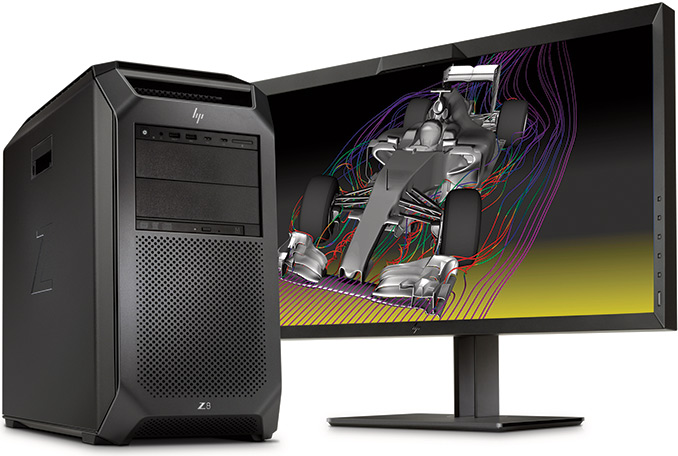 HP has updated its most powerful dual-processor Z8 workstation line with the latest components. The new systems contain up to two Intel Skylake-SP Xeon CPUs with up to 56 cores in total, up to 3 TB of DDR4 RAM, terabytes of storage as well as up to 9 PCIe slots along with optional TB3 and 10 GbE support via add-in cards. The HP Z8 workstation will be the pinnacle of HP’s computers for personal and professional use and its price in high-end configurations will surpass even the top-of-the-range gaming PCs.

Historically, most high-end workstations relied on server platforms to support more than one CPU and thus offer higher performance than any consumer desktop. The emergence of dual-core and then multi-core CPUs a little more a decade ago changed the workstation market quite quickly and significantly. In a world with quad-core CPUs, 4-way workstations did not make a lot of sense for 99% of the users and therefore they quickly became extinct. Moreover, by now, even 2-way workstations became rare. Today, the vast majority of workstations use one multi-core CPU that provides enough compute horsepower for professional workloads, whereas GPU-based accelerators are used for tasks like simulations. Nonetheless, there are still users who need maximum x86 performance and who therefore require 2-way workstations — and the HP Z8 is aimed precisely at such users. While the Intel Xeon Scalable processors with extreme core count were developed primarily with servers in mind, the Z8 is a system that people put on their desks and therefore it has a number of specific requirements regarding noise levels, features, security, compatibility with components and so on. 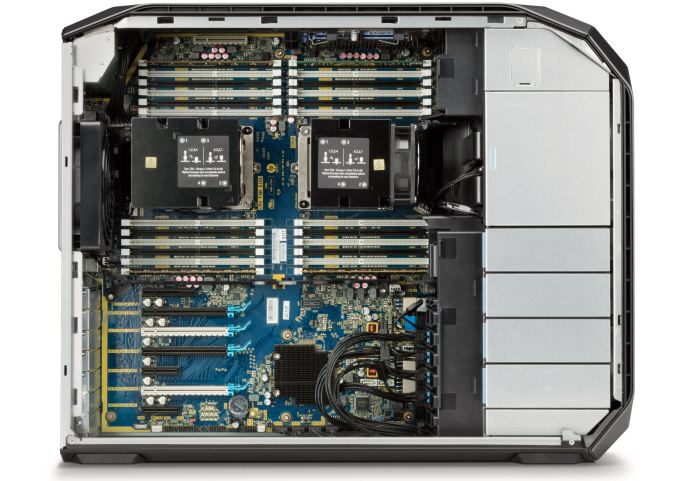 One of the key components of all PCs is its microprocessor. When it comes to the HP Z8, it is based on up to two Intel Xeon Platinum 8180 with 28 cores and 205 W TDP each, which means that the system has to remove 410 W of thermal energy only from CPUs, and this requirement had a significant impact on the design of the whole system. The company did not want to use a liquid cooling system, so it had to design an air cooling solution capable of cooling down two extremely hot CPUs as well as up to 24 DDR4-2666 memory modules. Each processor has its own radiator equipped with a high-pressure air fan (which speed is regulated by BIOS in accordance with system temperature monitored by numerous sensors). In addition, the system has multiple airflow vents on the front and on the top as well as one fan that exhausts hot air on the back. According to HP, such a chassis architecture ensures that the second CPU does not re-use warm air from the first one, but since they are located in close proximity, one will always affect another with its heat. Finally, the system has additional fans that cool down other components and produce more airflow within the chassis. 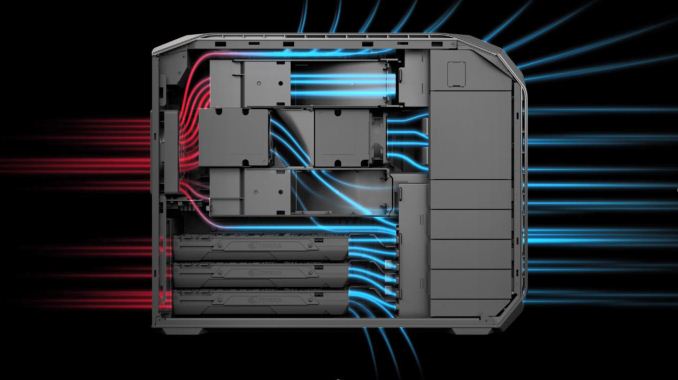 Speaking of other components, the HP Z8 supports plenty of them — whatever one might want. First off, the system has four PCIe 3.0 x16 slots for graphics cards or SSDs (up to AMD Radeon Pro, NVIDIA Quadro P100 or GP100, up to 4 TB HP Z Turbo Drive Quad Pro, etc.) three PCIe 3.0 x8 (two are non-hot swap) slots for SSDs and two PCIe 3.0 x4 slots. In addition to PCIe-based storage, the Z8 also features four 2.5”/3.5” bays for SATA/SAS SSDs or HDDs as well as two external 5.25” bays that can also accommodate drive form-factor storage devices using appropriate adapters. Those who need it, HP may also install an SD card reader as well as a slim DVD or Blu-ray ODD.

When it comes to connectivity, the HP Z8 has all the bases covered. By default, the system supports two GbE connectors (powered by Intel controllers), an 802.11ac Wi-Fi + Bluetooth module (Intel Wireless-AC 8265 controller), two USB 3.1 Type-C ports and two USB 3.1 Type-A ports on the front, four USB 3.1 Type-A ports on the back, multi-channel audio connectors (a Realtek HD ALC221 controller) on the back, a TRRS audio connector on the front and so on. Meanwhile, owners can optionally order to install two 10 GbE controllers, a Thunderbolt 3-supporting add-in-card and a variety of custom components for various industries and workloads (an external audio solution for a 5.25” bay, for example).

Since many businesses and enterprises require robust security for all of their machines, the HP takes everything seriously and ships the Z8 with a whole set of security features that it calls HP SureStart. The system features secure authentication, full volume encryption, TPM 2.0, has a Kensington lock and so on. 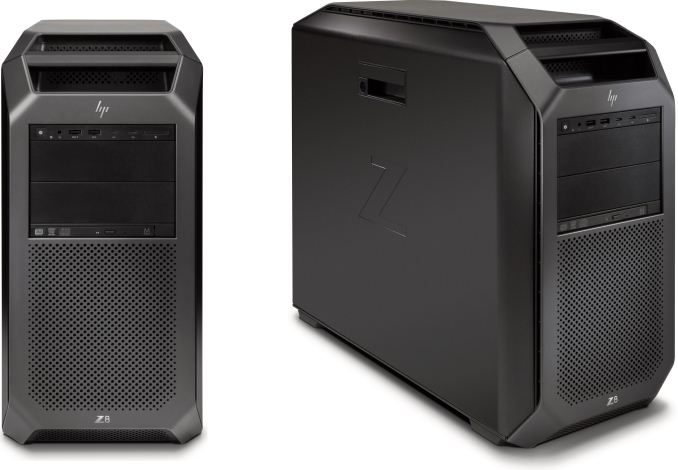 All the CPUs, GPUs, SSDs and other components require a lot of power and HP Z8 has plenty of it. The manufacturer offers 1125 W, 1450 W or 1700 W internal PSUs with up to 90 % efficiency. The PSU is located in a compartment behind the motherboard, so chances are that HP uses proprietary units.

It's normally at this point that a vendor such as HP states that the high-end models are likely to be sold under B2B contracts, where per-unit costs are not as severe. One OEM has told us that only 5% of sales of their high-end workstations come through direct sales for onlike pricing.