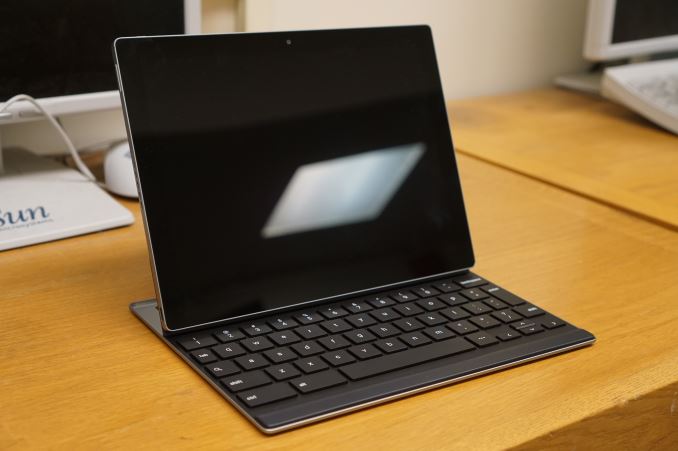 In early 2010, Google and HTC launched the Nexus One. While it was designed in a partnership between Google and HTC, it represented Google's first step into the arena of smartphone hardware design. Since that time, having a Nexus device designed and manufactured in partnership with another OEM has been something of a tradition for Google, and there have been many partnerships and products released in the six years since the Nexus One launched. While the Nexus program has remained strong, the products were technically branded by their respective manufacturers, even with Google's heavy involvement in the design process.

In 2013 Google made an exception to the trend set by the Nexus devices. The device was not an Android device, but a Chrome OS device instead. It was the original Chromebook Pixel, and it was entirely designed, branded, and supported by Google. Last year the original Chromebook Pixel received a successor in the form of the Chromebook Pixel (2015). Google was clearly testing the waters of hardware design and cooperating with companies only for hardware assembly, but they were still yet to ship an Android device that was entirely Google made and branded.

Last year's holiday launch of the Pixel C gave us the first Android device that is designed, branded, and supported by Google. It also cemented the Pixel branding as something that referred specifically to such devices, in addition to its original meaning of products which had sharp displays. The Pixel C is an Android tablet, and while it sits alongside the Google and HTC branded Nexus 9 it does not replace it. I've decided to put the Nexus 9 alongside the Pixel C in the chart below, as it's really the most relevant comparison that there is.

As you can see, the Pixel C is unique in a number of ways. That definitely befits the first ever tablet designed in-house at Google, but on paper the Pixel C really feels like a breath of fresh air after a long period of Android tablets that haven’t held up from a hardware perspective. Starting with the SoC, we see the first appearance of NVIDIA's Tegra X1 in a mobile device. It previously shipped in the SHIELD Android TV so this isn’t the first Android device with the chip, but it’s the first device to use it that runs off of a battery.

We’ve covered Tegra X1 in the past, but a high level overview is that it’s an SoC with a 1.91GHz quad core Cortex A57 cluster and a rather beefy 256 core Maxwell GPU. Something important to note is that X1 does not use Heterogeneous Multi-processing, and would normally use cluster migration, which means you would either be running on the A53 cores or running on the A57 cores. In this case however the A53 cluster is actually disabled, so you're really working with a quad core A57 CPU. Paired with the SoC is either 32GB or 64GB of NAND, and 3GB of LPDDR4 memory.

Moving on to the rest of the device, the next very interesting aspect is the display. It’s a 10.2” 2560x1800 panel with an aspect ratio that is essentially equal to the square root of 2. This choice of aspect ratio is interesting because it’s the same as the ratio used for A series paper which is used in pretty much every country outside of the US and Canada. In theory, this makes the display very well suited to displaying digitized documents. Since the display is wider than a 4:3 display, it does lend itself well to landscape rather than portrait use, and that ties in well with the keyboard accessory as well.

As far as the other specs go, you get the same rear-facing 8MP sensor as the Nexus 9, with a slight resolution improvement to the front-facing camera. There's 2x2 802.11ac WiFi, along with Bluetooth 4.1 and a USB Type-C connector which has hardware, but does not offer complete software level support for USB 3.1 and alternate interface modes. Powering everything inside the tablet is a 34.2Wh battery.

The Pixel line has always been notable for being entirely designed by Google, with industrial design that isn't influenced by the manufacturing and design capabilities of another company. This contrasts with Google’s strategy for their Nexus devices, which has been to partner with another manufacturer to jointly design and manufacture the device. As I mentioned before, the Pixel C is not a Chrome OS device like the existing two Pixel devices have been. Being a tablet, it seems that Google felt the Android platform would be better suited to the device than Chrome OS would be. 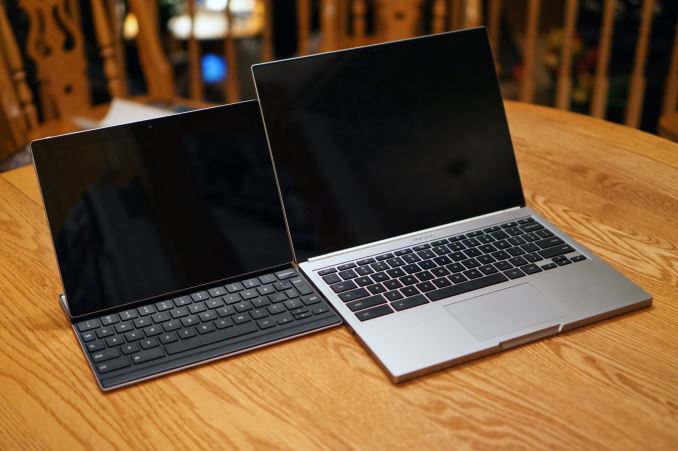 My only complaint is that the tablet is too heavy relative to its size at 517g. This becomes an even bigger issue when the keyboard dock is thrown into the equation. It’s ridiculously heavy at 399g grams, which brings the overall mass of the package to 916g. This isn’t as heavy as the Dell Venue 10 which I heavily criticized for its excessive mass, but it’s not far off. Google has an actual reason in this case, which is that both parts of the device are made out of aluminum, but in the end it’s just not as comfortable to use as the thinner and lighter iPad Air 2, and not even close to the Galaxy Tab S2. 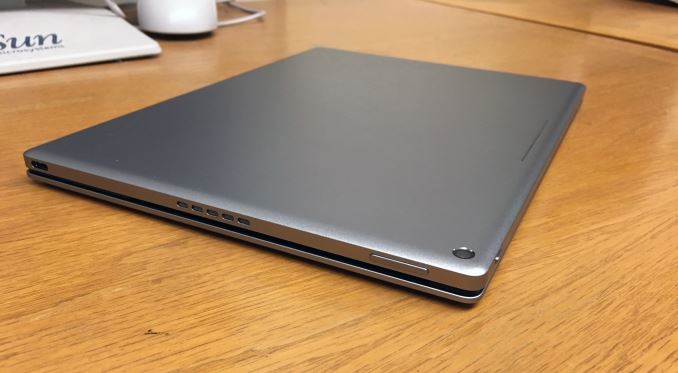 Something retained from the Chromebook Pixel is the light bar on the top. It lights up in Google’s signature red, blue, green, and yellow colors, and double tapping on the top of the chassis will cause the light bar to light up only a certain amount and color, which corresponds to the amount of remaining battery charge. This is still a very handy and unique feature, and it’s one of the small touches that makes a Pixel device stand out from the sameness of other tablets.

On the sides of the Pixel C you’ll find a 3.5mm audio port, a USB Type-C port, and a pair of stereo speakers. Google has made sure to note that this is a full USB 3.1 implementation, and that support for alternate interface modes such as DisplayPort and HDMI output will be coming in the future. I personally don’t believe in trying to sell a device on the basis of future updates, and at the moment the port isn’t any more functional than what you’ll get on the Nexus phones or the OnePlus Two. I suspect that this is just due to lacking support within Android, and that topic of software synergy is something I’ll be touching on more later in the review. As for the speakers, they’re not very good. I wouldn't rate them as high as the Tab S2 or any of the iPads, even though those are all down firing. The Pixel C's speakers just seem quite shrill, and yet also muffled and somewhat echoey. The only way I can describe the acoustics is that they're as if you covered just adequate speakers with a pillow and placed them several feet away. 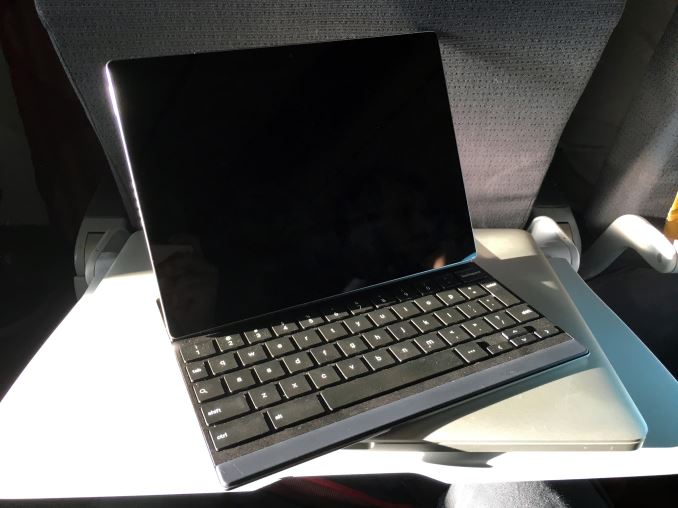 Moving on to the front of the Pixel C, we see the intriguing 10.2” 2560x1800 display surrounded by a symmetrical bezel. The display lends itself more to landscape use even though it’s not as wide as 16:10 Android tablets, and this ties in with the keyboard dock which is used in the landscape orientation and magnetically connects to the front or back of the tablet. I’ll be talking about the Pixel C’s keyboard dock in a later section of the review, but as far as the design of it goes it’s made to fit perfectly with the Pixel C. The bottom is made of aluminum, and the primary keys are all of the same size and travel distance as the Chromebook Pixel. Google has had to shrink some of the keys on the edges in order to fit them into a keyboard that matches the 10.2” display area, but in my experience this hasn’t posed any serious issues apart from the enter key being difficult to press. As you can see above, the size also makes it well suited to more cramped circumstances, such as working when on airplanes or on the terribly small desks in some lecture halls.

In the end, the Pixel C is as well designed and constructed as the Chromebook Pixel, and it rivals the best devices on the market in that regard. The aluminum chassis is sturdy, and there are no seams or visible screws. Google’s small touches like the light bar and tapping on the top to view your battery charge are also really nice additions, and they help it to stand out from other tablets, while also making it feel very Googley. That being said, having used the iPad Air 2 and the Galaxy Tab S2 makes it very clear to me how much heavier the Pixel C is, and it’s simply not as comfortable to use for long periods of time. The fact that you may often be using it with the keyboard dock can help mitigate this, but that only applies if you buy the keyboard and intend to use it frequently. Keeping the keyboard dock with you ends up increasing the mass significantly as well, and it gets to the point that you need to think about whether you’re willing to carry around something that is more like a small laptop than a tablet in terms of its size and mass. If you’re intent on buying the Pixel C and the keyboard to use it as a 2-in-1 then I think you’ll be fine with the Pixel C, but if you’re hoping for something that you’ll be comfortable carrying around as a standalone tablet you should definitely find some way to try it out to see if it’s manageable.