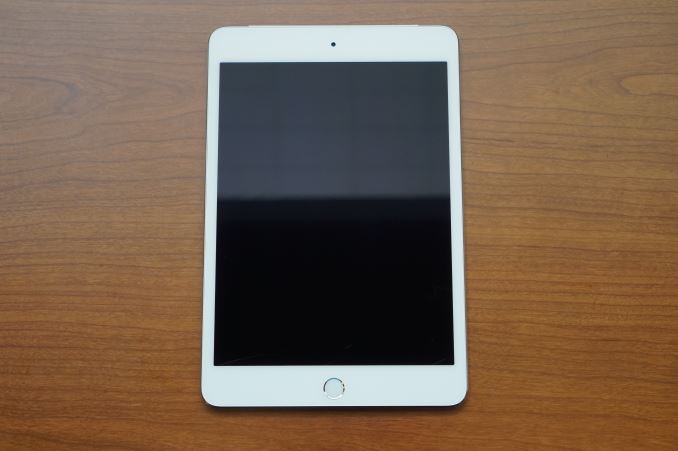 For a while now Apple has been holding two launch events toward the end of each year. The first event in September is used to launch new iPhones, and new products and services like the Apple Watch and Apple Pay. In October Apple then has an event where the main focus is on new iPads, along with some other announcements such as new Macs or accessories. This year Apple appears to have switched up the formula, as they rolled both the iPhone and iPad announcements into a single September event. With October essentially over it looks like we won't be seeing any more Apple launch events this year, and new products like the iMac with 4K Retina display have had quieter soft launches which supports this theory.

Since Apple combined their iPhone and iPad events into one, we actually have a new iPad shipping earlier than they're usually even announced. The iPad Pro won't go on sale until November, and the iPad Air 2 didn't see an update, but the iPad Mini line got a significant overhaul in the form of the iPad Mini 4, and it has been available for well over a month at this point. The iPad Mini has definitely been in need of a significant upgrade for a while, with last year's iPad Mini 3 essentially just being the iPad Mini 2 with Touch ID. While there's more to a device than spec sheets, they can provide a high level view of how two devices compare to one another. You can view the specs of the iPad Mini 4 compared against those of the iPad Mini 3 in the chart below.

When looking at the iPad Mini 4 on paper it looks very similar to Apple's iPad Air 2. There's a 2048x1536 IPS display, an 8MP rear-facing camera, 2x2 802.11ac WiFi, and 2GB of DRAM packed into a 6.1mm thick chassis. Of course, there is one major difference that can be seen from the specs, and that's the SoC. While the iPad Air 2 has Apple's A8X SoC, the iPad Mini 4 only has their A8 chip. This version of A8 does have bumps to the CPU and GPU frequency compared to the version that shipped in the iPhone 6, but it's missing the additional core of A8X and the GPU is Imagination Technologies' GX6450 rather than Apple's custom 8 core GXA6850.

There can also be differences between devices that don't show up in a spec sheet. For example, the iPad Mini 2 and the iPad Air were actually more similar on paper than the Mini 4 and Air 2 are. However, the specifications for the display didn't take into account the iPad Mini 2's limited color gamut, which was a major difference between the two devices. Ultimately, it's difficult to compare two devices just based on their specs, and over the course of the review I'll be looking the different aspects of the iPad Mini 4 in order to compare it to both the iPad Air 2 and the various other tablets that I've tested.

Apple described the iPad Mini 4 as a shrunken down iPad Air 2, and as far as the design goes they really weren't kidding. If you were to shrink down the Air 2 and scale the mass appropriately you would get this chassis. Compared to the iPad Mini 3 it's 3.2mm taller, 0.1mm wider, and 1.4mm thinner. The difference in thickness is definitely noticeable, especially when holding it in one hand. The mass has also been reduced, dropping from 331 grams to 298.9 grams. 30 grams doesn't sound like a ton, but when you're holding a tablet in one hand it's definitely noticeable and helps to reduce fatigue when holding the Mini 4 for long periods of time. 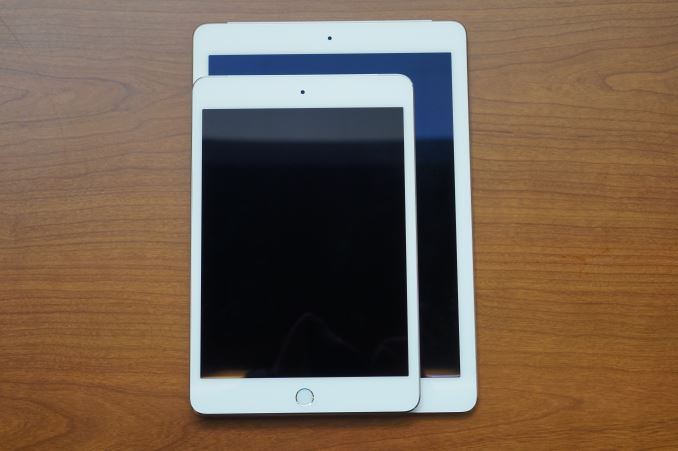 There's really not a whole ton to say about the front of the iPad. It's a big display, with a single button that also hides a fingerprint scanner, and a 1.2MP front-facing camera at the top. The cover glass is a giant flat sheet, and it meets chamfered edges on all sides, although unlike most non-Apple devices the glass is elevated so that your finger doesn't catch on the edges as you swipe off the surface of the glass. This is more expensive, harder to manufacture consistently, and reduces drop protection, but I think it's one of the small details that can make a device much nicer to use than those that lack it. Something interesting is that the spectrum reflected by the glass is different than the glass used on the Air 2. While both tablets have the same anti-glare coating, the more purple-shifted reflections of the Air 2 actually make things slightly more readable when there are visible reflections on the display. 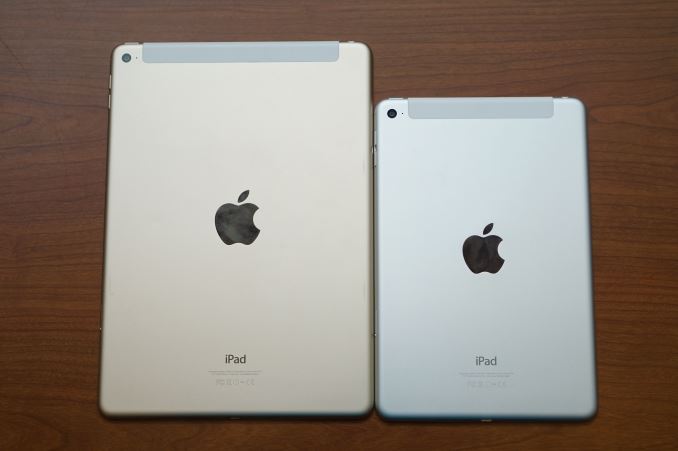 As for the back cover, there's also not much to say about it. The top left corner has Apple's 8MP rear-facing camera, in the middle is the Apple logo, and below that is the word iPad accompanied by various regulatory text that I continually hope can one day be banished and moved into a section of every device's settings application. On the cellular models you also get the plastic RF window at the top, which is white on the silver and gold models, and black on the space grey model. Beyond that it's just an unbroken piece of aluminum, and it feels as sturdy and solid as Apple's products usually do.

One thing worth noting for owners of older iPads is that the mute/rotation lock switch is no longer present. Like the iPad Air 2, that functionality has been moved into Control Center. 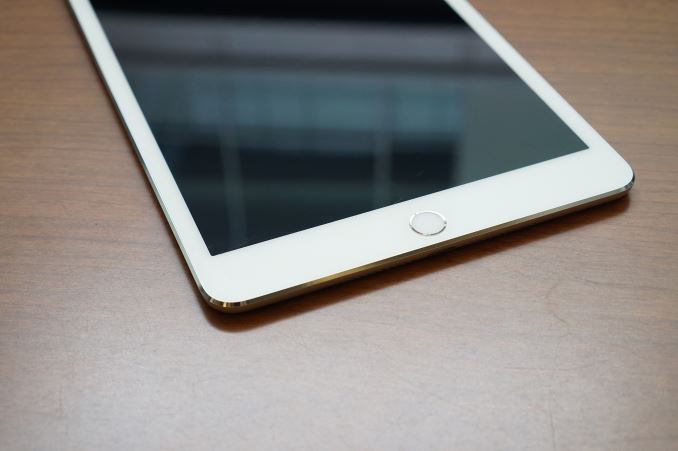 Something I've always noticed is that the industrial design of the iPad lags behind the iPhone by a couple of years. While the iPhone 5 was introduced with new industrial design (ID) with visual characteristics like chamfered bezel edges, the iPad 4 that launched the following month used the same tapered chassis as the iPad 3, and even retained the resin filling between where the display met the edges of the chassis. Interestingly enough, the iPad Mini that launched alongside the iPad 4 actually did match the ID of the iPhone 5 with some obvious concessions like the curved sides to maintain ergonomics. However, I think this was mostly a result of the iPad Mini being a completely new device rather than an interation of a previous one. With the iPad Air Apple brought the large iPad's ID mostly in line with the iPhone 5/5s, and it has stayed mostly the same in each subsequent Mini and full sized iPad while the iPhone has moved onto a newer design with curved glass that meets rounded edges. This isn't necessarily a bad thing, but I can't help but find myself imaging what the iPad Mini 4 would look like if it shared the ID of the iPhone 6/6s.

Ultimately, the design changes going from the iPad Mini 3 to the iPad Mini 4 are just those from the iPad Air to Air 2 transition but on a smaller device. The tablet gets thinner, lighter, and there are some design changes to go along with the thinner profile like only having a single row of speaker holes on the bottom of the chassis. It's worth noting that I didn't find these speakers to be any better or worse than the Air 2, and

If you've ever seen an iPad Air 2 you already know what an iPad Mini 4 looks like, because it's the same sturdy and premium feeling aluminum enclosure but made smaller. I would definitely like to see a new set of iPads that adopt the iPhone's most recent ID, but I'm not at all unhappy with the current state of the iPad's design. Apart from the Dell Venue 8 7840 there isn't really anything that is comparably well built at this price point, and so if you really care about the design and build quality of a tablet the iPad Mini 4 should be high up on your list of devices to consider.