In and Around the Corsair Carbide Air 540

I was enthusiastic about what became the Carbide AIr 540 from the prototyping stages, but I was at least a little curious as to how Corsair was going to handle the ID. With most of their other cases, their designs were fairly simple and clean, but this is something different. It's asymmetrical, not just internally, but externally. I think they really hit it out of the park, though; the Air 540 looks almost like a baby server.

Looking at the front of the Carbide Air 540, the dual-chambered design is pretty evident: on the left hand side, behind the front mesh vent, is the main system chamber that houses the motherboard, CPU, and expansion cards. It's sized exactly large enough to fit an ATX motherboard and radiators in the top and front. On the right side are the two 5.25" drive bays, positioned above the I/O and power and reset buttons. That row of I/O lines up beautifully with the Corsair logo in the front mesh. 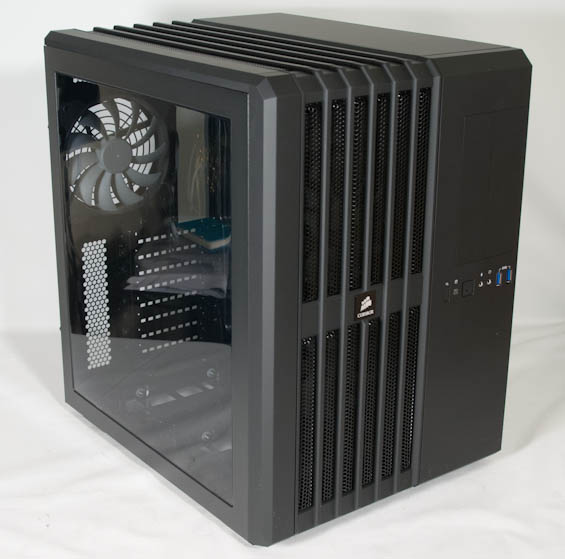 Roll the Air 540 on to it's front, and the line of mesh venting continues along the top of the enclosure. Note too that the mesh vents are actually very easy to remove: the top mesh is secured with two thumbscrews on the back, and once you slide it off, you can lift and remove the front mesh. That front mesh also has places for you to secure it with screws if you're so inclined, but if the 540 is assembled correctly, everything stays firmly in place.

Since there aren't any unsightly drive bays in the primary chamber (just the two sleds on the bottom), Corsair has windowed the left side panel almost completely. However you feel about windows on cases, I think it's hard not to feel like it makes sense with the 540. Meanwhile, the right side panel has ventilation above the power supply bay, but that's it. It's worth noting that both side panels are hinged and held in place with thumbscrews. 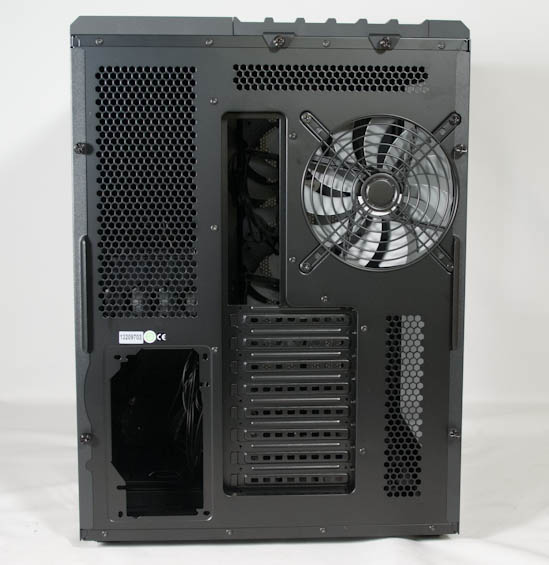 The back of the 540 gives you a much clearer idea of how everything is laid out internally. Behind the primary chamber is the power supply bay, and then above that are the 2.5" drive cages. Corsair is using the same cages they used in the Obsidian 350D, and while I don't care for the plastic that much, they definitely get the job done. Corsair's still a step ahead of the competition here; toolless 2.5" drive cages or sleds are still uncommon. Note the middling clearance of the 140mm exhaust fan; in experimenting with the 540 I found that some 140mm fans wouldn't even actually fit (or at least not easily), and I don't believe you could realistically install a 140mm radiator back here. 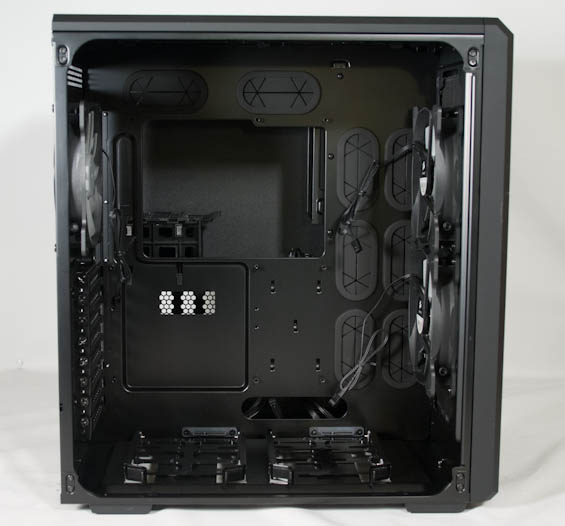 The primary interior chamber of the 540 doesn't actually include much in the way of surprises. This is as basic as it gets: fans, motherboard mount, routing holes, and the two drive sleds at the bottom. That's it. It's still exciting, though: Corsair has taken all of the heat-generating components of a PC and almost completely separated them from the rest by placing them in a chamber with virtually unobstructed airflow. 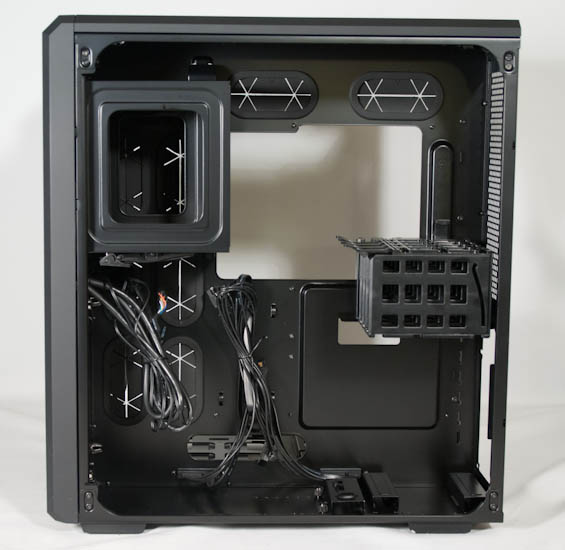 If anything, the rear chamber is almost a little disappointing. There's a tremendous amount of negative space back here which is good for hiding cabling, but I feel like we could've had a smarter, cleaner assembly of drive cages. This is always the unsightly side of an enclosure, yet there's definitely room for improvement here. Worth mentioning, though, is that this is the first case I've tested that had an essentially toolless power supply mount.

There's something ultimately very fresh about the Corsair Carbide Air 540's design. We're walking a road less travelled here, so I'm more inclined to give Corsair the benefit of the doubt and some leeway on some of their design choices because I know they were largely building their template from scratch. This is unlike anything else in their line, let alone most manufacturers' lines.