In and Around the MSI GX60

I'll say this for MSI: they've kept a pretty uniform aesthetic for their gaming notebooks. I'm actually of the opinion that the slightly smaller 15.6" form factor serves it better than the outsized 17.3", and the cooling system designs between the GX60 and its larger cousin are basically uniform. In fact, almost everything between the two chassis is uniform, making any kind of detailed analysis almost redundant. Just about everything I said about the iBuyPower Valkyrie CZ-17's chassis design applies here. 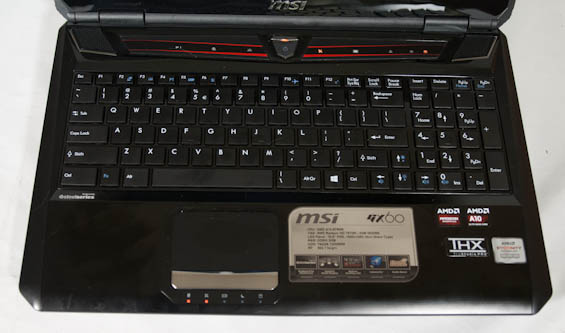 We're looking at black plastic used for essentially the entirety of the MSI GX60. The touchpad continues to be a sticking point; it was abnormally small on the Valkyrie, CyberPower FangBook, and the GT70 Dragon Edition, and the slightly smaller GX60 has the same issue. The SteelSeries licensed keyboard loses the backlighting (likely sacrificed to bring the price down) but retains both the excellent key action that makes it such a strong choice and the baffling layout that utterly undermines it for American consumers. Even the L-shaped access panel on the bottom is similar.

For reference, this is the internal layout of the CyberPower FangBook, which uses the last generation cooling design for the GT70: 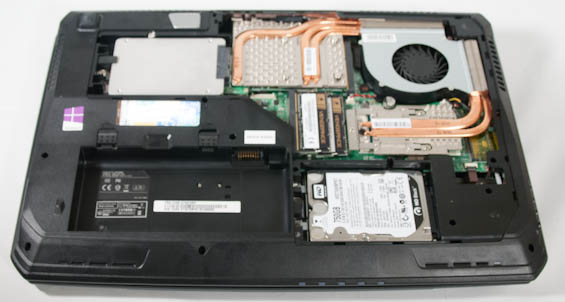 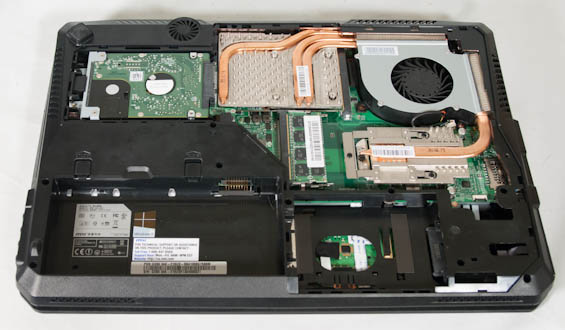 And, just for reference sake, the interior of the recently reviewed GT70 Dragon Edition: 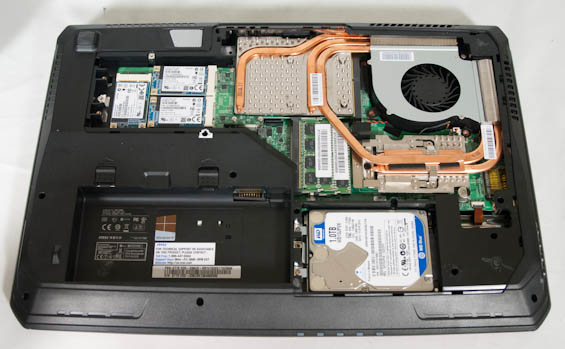 Apart from very minor differences in the heatpipes on the CPU coldplates, MSI appears to be using essentially identical motherboard layouts and cooling systems between their 15.6" and 17.3" lines. Eyeballing it, I have a hard time believing much, if any, cooling capacity is added moving up in the line. That means that the only reason to buy a 17.3" gaming notebook from MSI would be because you want the larger display. Not higher resolution, just larger. The keyboard size is identical, port layouts are almost identical, cooling systems are almost identical. While there are no stock GT60/GX60 units that sport 32GB of memory, iBuyPower's 15.6" Valkyrie (based off of this chassis) can be configured with up to four 8GB DIMMs.

It's a commodity design and like a lot of MSI's decisions, it seems predominately geared towards being as frugal and cost-effective as possible. That's not necessarily a bad thing, but sacrificing specialization of any kind is damaging. The most brutal thing about the GX60 may be the existence of MSI's own GE60, which trades the APU for an Intel i7-4700MQ and the Radeon HD 7970M for an NVIDIA GeForce GTX 765M. I'm in the process of testing a notebook that has a 765M, and its performance is almost on par with the outgoing GeForce GTX 675MX. That's still slower than the 7970M, but you gain a boatload of CPU performance.