Seagate has finally started shipping their new Barracuda XT 2TB drives that feature the new 6Gb/s SATA interface based on SATA Revision 3.x specifications. We had an early preview of the drive a few weeks ago and finally received a production level item for review. Just as important, we now have retail motherboards from Asus and Gigabyte featuring 6Gb/s capabilities. Well at least the Marvell 88SE9123 chipset included on both motherboards is theoretically capable of 6Gb/s operation.

Asus and Gigabyte took a different approach to implementing the Marvell 9123 chipset on their motherboards. Asus’s top of the line P7P55D Premium (a very good board by the way, full review coming shortly) features a PEX PLX8613 PCIe bridge chip that will convert four of the P55’s PCIe x1 lanes (250MB/s each) into two 500MB/s lanes. While still short of the maximum theoretical 600MB/s transfer speed of the SATA 6G specifications, it will provide more than enough burst bandwidth for the first generation 6G hard drives. The benefit is that the 6G capability is always on without affecting the other capabilities of the board and the same PLX chipset will be utilized for the upcoming USB 3.0 (NEC chipset) option on their upper-end boards.

Gigabyte’s implementation will be utilizing an x8 PCIe 2.0 from the Lynnfield processor that will obviously provide more than enough bandwidth but the drawback is that CF/SLI capabilities will be disabled as only a single x8 PCIe 2.0 lane will be available to the GPU. The benefit in this approach is that the SATA 6G switch is disabled/enabled in the BIOS by the user based upon need. Since an additional hardware chipset like Asus is utilizing is not required, it should result in a slightly lower board cost. Gigabyte informed us this week that all P55A-xxx boards will feature both SATA 6G and USB 3.0 capabilities. We will compare the performance of Gigabyte’s solution against Asus’ implementation shortly.

We are utilizing the Intel 160GB SSD for our OS drive and comparing the Seagate XT drive to its closest competitor, the WD Caviar Black, on both the Intel P55 and Marvell 9123 controllers. The P55 is limited to SATA 3Gb/s operational mode when running either drive, while the Marvell controller will be operated in SATA 6Gb/s mode with the Seagate drive and in fallback 3Gb/s mode with the WD drive. We are utilizing Marvell’s latest 1027 driver and Intel’s 7.0.0.1013 driver set in AHCI mode. 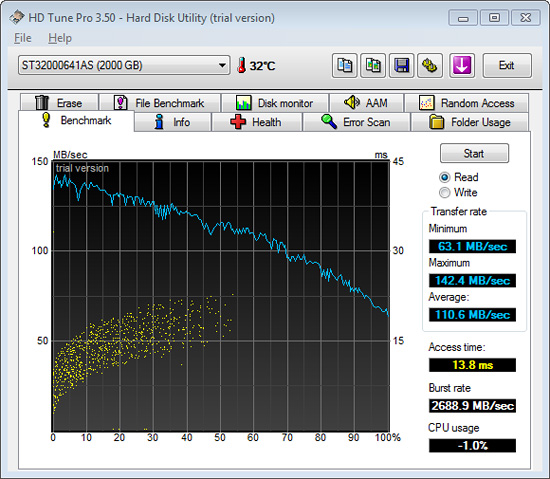 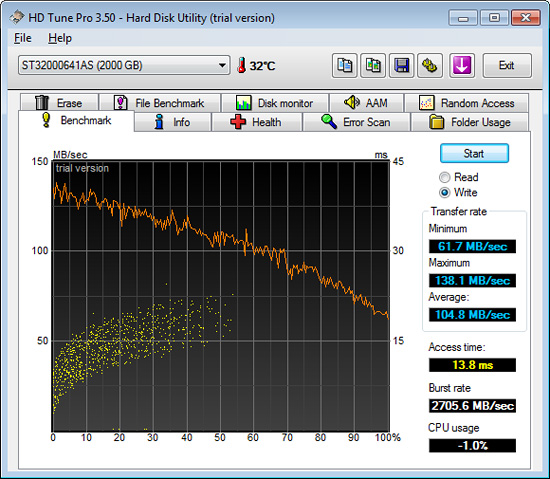 See something strange, the read burst rate of 2766MB/s and write burst of 2705MB/s are incredible for single drive performance but like most synthetic test results, they are not a true indication of actual platform performance. The reason for these “outstanding” results is that Marvell’s latest driver allocates (dynamically) a portion of system memory for transfer cache operations. Intel’s own Matrix Storage Manager and JMicron’s latest driver set also utilize a similar approach. In fact, Windows 7 implements a similar type of caching at the kernel level that makes these driver optimizations redundant in some ways.

Marvell is using aggressive algorithms in this particular driver to read and write as much possible data out of the RAM cache as possible before relying on transfers via the hard drive’s own internal cache or reading/writing from the platter or NAND. In earlier driver sets from Marvell, they requested that Window’s write-cache buffer flushing option be disabled in order to gain the maximum benefit from the 9128 controller. From all indications, the 1027 driver automatically disables this function as our performance results were the same with it disabled or enabled.

While performance was generally up to 10% better with this driver compared to the earlier 1018/1025 driver sets, we have a problem with the write-cache buffer flush being disabled automatically. There is a potential for data loss or even file table corruption if the buffers are not flushed and written properly if power is lost or there is another problem with the system. Of course that potential problem even exists with the out of box drivers and with write-caching enabled.

Our concern is that the Marvell driver might not recognize file table priorities in the same manner that the kernel does and those journal entries will be placed into the same general cache queue with other mundane requests. That could increase the likelihood of data or table corruptions above the normal risk posed with write caching. We are still waiting on additional information about the driver design and will update our findings in the final review.