The Ugly is in the Controls

Grand Theft Auto is one of those games where it is more fun to talk about what you did in the game, than to actually do it. Let me give you an example:

Early on in the game, I was trying to steal someone's car, the driver got out and we got into a fist fight. The cops arrived and what's the first thing they did? Shot the driver of the car I was stealing in the face. I took the opportunity to hop in the car and drive away.

That's one of those stories that wouldn't exactly be funny in real life, but it's hilarious in the game itself ("hey! I was committing a crime and then the cops shot the victim in the face, woohoo!"). Unfortunately, my example omits struggling with camera, controls and the actual pace of the game itself.

The controls in GTA4 seem sluggish, even moreso than in San Andreas. They do take some time to acclimate, but even after that point they are just not all that great. You can easily play the game with the controls, but your movements always feel slow, almost to the point of frustration. Many have praised the cover system as being very Gears-like; now I liked the cover system in Gears, and the cover system in GTA4 is nothing like it. Conceptually the two are identical, but it's simply much more awkward in GTA4.

The default camera tends to follow you pretty well, so fumbling with the right thumbstick isn't as critical as in a first person shooter (which is one of the things you'll have to "unlearn" when first playing GTA4). But moving around and fighting both feel like the slowest parts of the game.

After reading all of the perfect-score reviews, I sort of expected GTA4 to be a revolutionary take on the franchise. Grand Theft Auto IV is instead more of an evolutionary successor to San Andreas, the gameplay is very similar and the types of things you do are decidedly GTA.

If you were put off by the "drive here, rob this guy and drive back" missions of previous GTAs, then GTA4 does have more of the same. Granted there is a good deal of variation within the missions, but if you fundamentally didn't like the previous games, then there's a good chance that GTA4 will be no different. 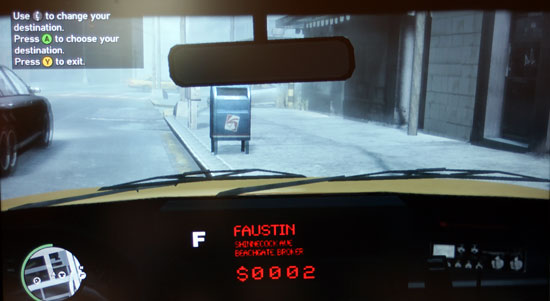 At least you can take a cab to your missions, it costs money but you can always murder the driver when you get there and even make money on the trip.

To me, the majority of missions in any given GTA title were never that good, but what kept me coming back was to fill in the gaps in the story or the handful of missions that were unbelievably fun. It's a lot like a season of 24 or The Office, you get a little taste of what you want in each episode which keep you coming back for the whole season. You could even take it one step further and say that GTA4 promotes a healthy outlook on life: if you live for the 1% of the time things work out perfectly, it makes the remaining 99% not so bad. That may be a stretch, but the likelihood of that even being entertained by the mainstream media is next to nothing; they'll be too busy blaming the latest installment in the GTA franchise for some horrible event.