Western Digital VelociRaptor: A Drive with a Bite

The original Western Digital Raptor was launched as the WD360GD in March of 2003 with an enterprise level 10,000 RPM spindle speed, SATA interface, 8MB buffer, 5.2 millisecond read seek time, and a single-platter design featuring 36GB of storage. While it shined in single-user performance, the drive did not fare well against its SCSI-based competitors in the enterprise server market. Limited by size and a complete lack of command queuing abilities, it delivered performance that was not up to par with the SCSI drives in critical multi-user scenarios. However, due to the lack of entry-level SCSI drives, a growing interest in SATA components, and a very avid computer enthusiast market, the drive was able to succeed and build a sterling reputation for Western Digital in the SATA market.

The next version of the Raptor launched as the WD740GD in December of 2003 and boasted several needed enhancements. These enhancements included a capacity upgrade to 74GB, 4.6 millisecond read seek time, a FDB based motor to address noise concerns, and ATA-4 tagged command queuing. While TCQ was a welcome addition and certainly improved the drive's I/O operations, it still was not a match for most SCSI drives in the enterprise market. This was primarily due to a lack of SATA controllers that fully supported TCQ and firmware that was not as mature as the SCSI competition.

Computer enthusiasts flocked to the drive due to its performance advantages, but the drive continued to have limited success in the enterprise server market. The last major update to the Raptor family occurred in January of 2006 when the WD1500ADFD launched with a significant list of improvements. This drive still sported the familiar 10,000 RPM spindle speed, 4.6ms read seek time, and a two-platter design now at 150GB capacity. The platter's density increased to 75GB+ and equaled that of several 10,000 RPM SCSI competitors. The buffer size doubled to 16MB, matching the latest offerings from other drive manufacturers, and a native SATA implementation with Native Command Queuing became standard.

The WD1500ADFD became the de facto drive for enthusiasts and for a while, its 150GB capacity was acceptable. (Price was still a concern for some, of course, and many people were content to get larger, cheaper, quieter drives that performed more than adequately in most usage scenarios.) Since the drive's introduction, we have seen an explosion in capacities with terabyte drives becoming normal fare from the drive suppliers and the sweet spot in the drive market slowly inching up to the 500GB range now. Not only did the capacity of the Raptor series seem small, the latest SATA 3 Gb/s 7200RPM drives were starting to offer equal or better performance in several areas at greatly reduced per-gigabyte prices. 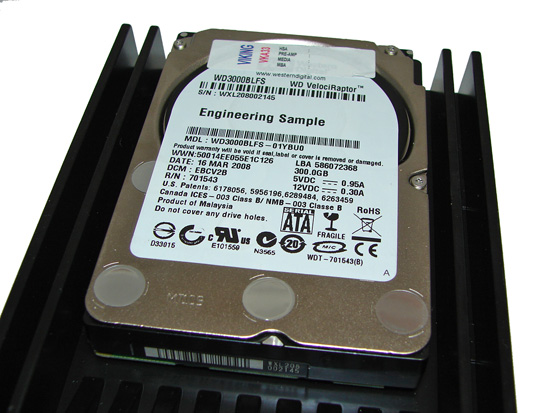 As of today, Western Digital is announcing their fourth-generation design, aptly named the "VelociRaptor" as a nod to its promised capabilities. The capacity is now at 300GB and that is the least of changes for the new VR150 product family. Western Digital took a serious look at the enterprise market and determined they needed a product design that could compete in the widely expanding enterprise market where 2.5" form factor drives are taking a foothold due to the ability to pack more drives into the same chassis footprint. The other advantage to a 2.5" form factor is reduced power consumption, a hot topic in today's energy-aware world.

With that market in mind, Western Digital has moved to a 2.5" form factor with the VelociRaptor, while at the same time providing a unique 3.5" chassis mounting system for the enthusiast desktop market. This mounting system is named "IcePAK" and features a finned aluminum design that offers some degree of thermal dissipation. However, its primary purpose is to ensure this drive works in the multitude of desktop chassis. The drawback is the IcePAK mounting system does not work with standard SATA backplanes found in several rack-mounted servers. To address the enterprise market, WD will ship the drive without the IcePAK chassis.

Let's take a quick look at our preview results today. 5/2/08 - We have updated the test scores with results from a new drive supplied by Western Digital.